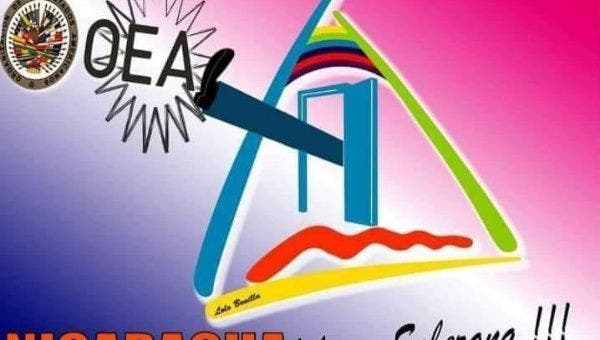 Above Photo: Nicaragua Is Exposing The True Role Of The Sell-Out OAS, An Instrument Of Neocolonialism. Twitter/@Dannyshawcuny.

The Declaration Joins Other Institutions And Sectors Of Nicaraguan Politics In Response To The Interference Of The OAS.

UPDATE: Nicaragua formally filed to withdraw from the Organization of American States. Read the letter from the Nicaraguan Minister of Foreign Affairs to the OAS Secretary General: Letter to Luis Almagro

#BREAKING | Nicaragua confirms its withdrawal from the Organization of American States (OAS). pic.twitter.com/JkGqR3QS75

The magistrates of the Supreme Court of Justice (CSJ) of Nicaragua released this Wednesday the agreement which aligns with the Sovereign Declaration of the National Assembly of Nicaragua, which urged the Executive to leave the Organization of American States (OAS).

The so-called agreement 126, issued in support of the Parliament, condemns the OAS’s unjust actions in Nicaragua’s internal affairs.

The text was read by the acting secretary of the CSJ, Geraldo Áreas Lacayo, who highlighted the independence of the Legislative, Executive, Judicial and Electoral powers, which coordinate harmoniously and subordinate only to the supreme interests of the nation.

In this regard, he confirmed “the commitment of Nicaraguans to the principles of sovereignty, self-determination and independence as inalienable rights that belong to the people of Nicaragua.”

“The Supreme Court of Justice (CSJ) has issued Agreement 126 in support of the call made by the AssemblyNi in its declaration this October 16 condemning the meddling actions of the #OAS in the internal affairs of #Nicaragua.”

Likewise, it supports “the request of the National Assembly to the President of the Republic of Nicaragua, Commander Daniel Ortega Saavedra, in his capacity as Head of State and Government; to denounce the Charter of the Organization of American States in accordance with the provisions of Article 143 of said instrument.”

Members of the Liberal Constitutionalist Party and other opposition benches pointed out that, although there are differences in the ideological field among the Nicaraguan political organizations, they defend the sovereignty, freedom, and independence of the country in a unified manner.

If this procedure is formalized, Nicaragua would be the third country to leave the international mechanism. The first was Cuba, expelled a few years after the triumph of the 1959 Revolution, and the second was Venezuela, which formalized its withdrawal from the OAS in 2019.