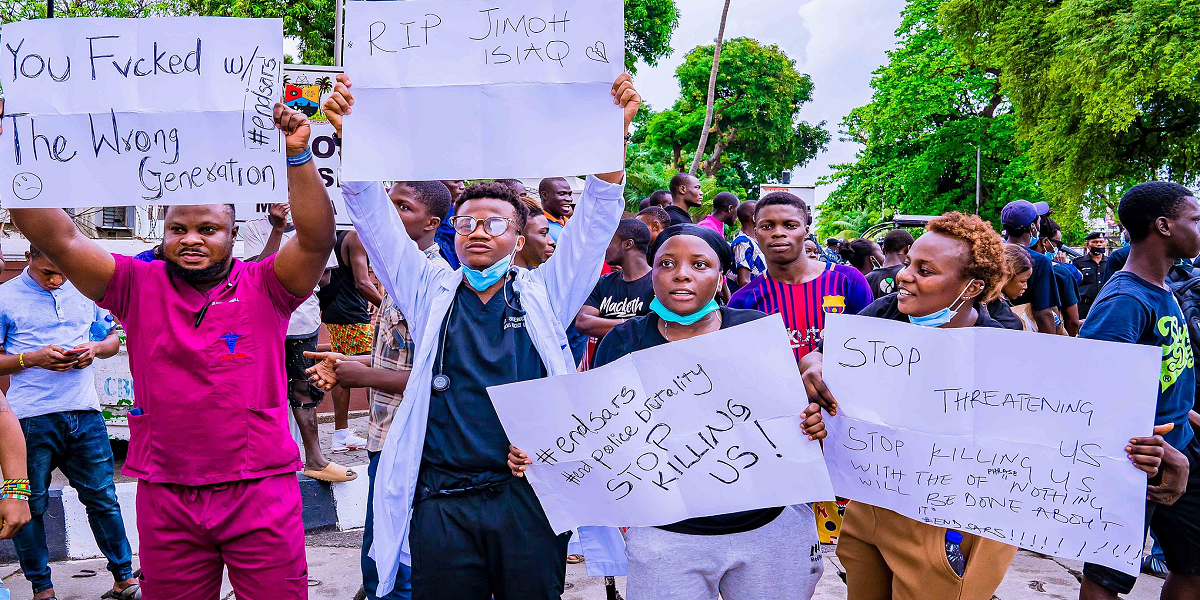 The uprisings against police brutality that swept across Nigeria must be contextualised within the country’s colonial history.

‘Each generation must, out of relative obscurity, discover its mission, fulfill it, or betray it,’ wrote Frantz Fanon. It has been 60 years since Nigeria achieved its independence from Britain, yet these words reverberate both as anthem and creed in all corners of Nigeria today.

In October 2020, thousands of Nigerian youth from across the country chose to take a stand against the extra-judicial killings committed by the Nigerian police branch known as SARS (Special Anti-Robbery Squad). Amidst a global pandemic and an economic recession, Nigerians stood firm in their resolve to fulfill the mission of their generation – ending police violence and corrupt governance, by any means necessary and, in many cases, at the cost of their own lives.

The mission in question is much bigger than closing down SARS and goes back much further than the squad’s establishment in 1992. It was taken up in 1929 when the Umunwaanyi women of Owerri and Calabar led uprisings against the British colonial officers who threatened their traditional Igbo customs and sources of economic agency. It was taken up again in 1941 by Michael Imoudu and the trade union organisations that protested and agitated against colonial governments for the right to a living wage and fair workplace treatment. And it was taken up in 1946 when Olufunmilayo Ransome-Kuti and the newly formed Abeokuta Women’s Union took on the imperialism of the Native Authority System and the flat tax imposed by the Alake of Egbaland.

In the 1950s, Mallam Amino Kano and the Northern Elements Progressive Union (NEPU) not only took on the neo-colonial emirs of Nigeria but also advocated for northern Nigerian female education. Post-independence, in 1974, University of Ibadan students took to the streets to draw attention to the killing of their fellow student Kunle Adepeju by Nigerian police during a peaceful protest over university mismanagement. And most famously, in recent times, the mission was taken up again in 1995 by Ken Saro-Wiwa and the Movement for the Survival of the Ogoni People (MOSOP), who dared to take on both the federal government of Nigeria and foreign oil companies to demand an end to the environmental degradation and exploitation of their land.

The material basis of violence

This list is not definitive by any means but illustrates the extent of resistance to all forms of state violence and oppression. In Nigeria, this has been meted out through murders, imprisonment, dispossession of land and local resources, and political disenfranchisement. On 20 October 2020, Nigerians were once again the targets of this violence, this time unleashed by the army. Peaceful #EndSARS protesters at Lekki toll gate were met with a barrage of bullets, killing at least a dozen young Nigerians and wounding many more.

Journalist Edwin Mangunagu wrote that ‘Violence is a force which sometimes conceals its material basis.’ As such, we must ask not only what is the material source but also, more importantly, what is the direction of the mission that falls upon each generation of young Nigerians?

In excavating each of the acts of violence in Nigeria’s history, a consistent material through-line is apparent: (neo-)colonialism, imperialism and primitive capitalist accumulation. As Iain MacCleod, the colonial secretary in Harold Macmillan’s Conservative government, put it in 1960: ‘The prime minister has recently in a striking phrase spoken of turning an empire into a family. But what is happening is part of the pattern of our heritage. We did not go abroad to govern, we went abroad to trade… So if we are wise we can stay in countries that we once ruled – as traders, farmers, planters, shippers, businessmen, engineers.’

This is the essence of neo-colonialism, in unison with both imperialism and capitalist accumulation, it is a means to enrich colonial governments at the expense of the indigenous. From the back-door deals made by Unilever to push the amalgamation of Nigeria in 1914 to the nepotistic and anti-federalist premises that underlay the drawing up of states in 1967 and the undemocratically drafted constitution of 1999, this three-headed colonial contagion stands at the very inception of Nigeria. It is impossible to look at Nigerian policing, including SARS, without assessing this imperial past. SARS’ origins lie in the 1943 colonial act that specifically drafted police recruitment and militarising methods to serve and protect colonial investments.

The colonial stronghold persists with organisations such as the US Africa Command, Africom. Under the guise of ‘protection’ against domestic threats, global north organisations guard their investments in countries such as Nigeria, offering millions of dollars to bolster military weaponry. The same kind of primitive capitalist accumulation is apparent in the various acts of legalised theft committed by SARS officers, who are simply acting within the chain of extortion first committed by the Nigerian political elite.

The basis of the mission

With this material basis of violence elucidated, it goes without saying that the basis of each generation’s mission is also in plain sight: anti-(neo)colonialism, anti-imperialism and anti-capitalism. Radical thinkers in Nigeria’s leftist history, such as Eskor Toyo, have suggested the importance of understanding the material dynamic between these apparently abstract terms as the bedrock of the Nigerian problem:

‘It is not enough to be a political scientist… it is not enough to recognize that Nigeria has ethnic groups, is neo-colonialist and is underdeveloped, or even that she is ruled by a bourgeois class with unspecified character… if one does not understand that the military coups and other political convulsions that had shaken Nigeria since independence were crises of the politics of primitive accumulation in a neo-colonial and multi-ethnic national setting, his or her analyses and advice either to the government or to the opposition would be useless.’

To return to Fanon, if each generation has a mission, it is evident that this generation has sought bravely to fulfil it. Its commitments and demands, which have now evolved past the call to dissolve SARS (which the government has conceded) or any rebrand, serve to counter the material basis of violence. At a time when we are seeing it reveal its fangs through the recent state-led onslaught, which has led to more than 60 other deaths in addition to those at the Lekki toll gate, it is important for this generation – at home and abroad – to not allow its stance to be pushed back into obscurity and alienation.

Despite neo-colonial efforts of erasure, this generation can find strength in the knowledge that it is rooted in Nigeria’s rich history of revolt, which is multi-class, multi-gender, multi-geographic, multi-sexual orientation and, most importantly, multi-ethnic. It is a history of revolt that understands that as individuals we stand in relative obscurity but by coming together as a nation we can make our voices heard. This generation has not betrayed its mission; neither shall the next one.

This article first appeared in Issue #230, Struggles for Truth.