#NMOS14: Solidarity From Coast To Coast

In response to the most recent murders of unarmed black men by police and the excessive show of force against the mourning community of Ferguson, MO, a national moment of silence was called for on Thursday, August 14. The call resonated from coast to coast as communities in 96 cities in 37 states plus the District of Columbia organized events.

The turnout at many of the events was large. In New York City, thousands of people filled Times Square and shut it down with an impromptu sit-in. Police initially kettled the marchers and started making arrests, then changed their tactic and began releasing people from the square.

Marchers everywhere held their hands in the air and chanted “Hands Up, Don’t Shoot!” Michael Brown, the 18 year old killed in Ferguson, MO last Saturday was reported by eyewitnesses to be standing with his arms in the air saying that he was unarmed and asking not to be shot when the police officer shot him multiple times until he fell to the ground. When the Ferguson community held vigils and marches to protest the killing, the St. Louis County police brought out tanks and officers in full military equipment who fired tear gas and rubber bullets at the community members including local legislators. In a situation that exacerbated the trauma already experienced by the community, officers also pointed assault rifles at people. Many people held their hands up in the air and repeated “Don’t shoot.”

The situation escalated even further Wednesday night when the militarized police began clearing the area in an aggressive fashion. Two reporters were arrested while working in a local MacDonalds. An alderman and his staff who were taking refuge were dragged from their cars, arrested and held in jail overnight. Tear gas was fired into people’s yards and a sound cannon was deployed.

On Thursday morning, Governor Nixon relieved the St Louis County police force from responsibility for the Ferguson community and put in place Captain Ron Johnson instead, a member of Ferguson. Capt. Johnson changed the tone completely and marched with the people on Thursday night. Hundreds turned out for that peaceful march. Neighbors provided drinks and food to the marchers and members of the New Black Panthers assisted with traffic.

Below is a series of photos from rallies and marches:

If we missed your city, please send a photo/video and attribution to info@popularresistance.org.

Dido ‏@ChristopherDiDo 4h
#Ferguson we are out in Austin standing with you! #NMOS14

Hannah DApice‏@hannahdapice
At #NMOS14 in Dallas, TX. We stand with #Ferguson for #JusticeforMikeBrown and the #demilitarization of police.

Jasmine Sailing ‏@madamecp 1h
5:13pm at #Denver #NMOS14. Crowd was still arriving, but there was a front line of “Hands Up Don’t Shoot” kids.

Anonymous Press ‏@AnonymousPress 1h
This is What Good Cops Do. Captain Marches with Protesters in Ferguson. Riots Come to a Halt http://thefreethoughtproject.com/captain-mike-brown-case-marches-protestors/ …

Antonio French ‏@AntonioFrench 16h
Shots from the protest going on right now in front of the #Ferguson Police Dept pic.twitter.com/XZvhASpAiT 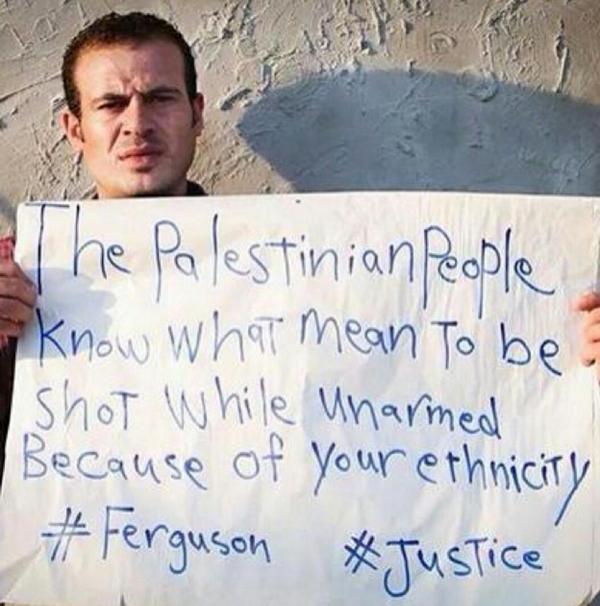