Above Photo: President Trump, speaking here at a refinery in North Dakota, has pushed for policies that promote fossil fuels and for the removal of greenhouse gas regulations. Credit: Brendan Smialowski/AFP/Getty Images

The U.S. alone would burn through much of the world’s carbon budget under its current policies as oil production and the natural gas boom continue.

The carbon footprint of the United States will barely go down at all for the foreseeable future and will be slightly higher in 2050 than it is now, according to a new projection by the Energy Department’s data office.

If that projection came true, it would spell the end of an era in which the U.S. led the world in reducing the tonnage of carbon dioxide it pumped each year into the atmosphere.

The new plateau would reflect Donald Trump‘s determination to walk away from the Paris climate agreement, to abandon any thought of more ambitious climate change policies, and to overturn the main federal climate protections recently put in place, like President Barack Obama’s rules to curtail emissions from electric power plants.

As the world’s largest national economy and second largest source of greenhouse gas emissions, an American retreat of this kind would seriously undermine the key goal of Paris, which is to bring net emissions to zero in the second half of this century.

Instead, the U.S. would almost single-handedly exhaust the whole world’s carbon budget by midcentury.

Remarkably, such a failure to further improve the nation’s climate performance would come even as the nation continues to move away from coal. The Energy Information Administration projection says that starting in 2022, practically all additional electricity generation capacity would come either from natural gas or wind and solar.

Coal would flatten out, but not disappear, and the boom in gas and oil would continue, turning the U.S. into a net exporter of energy—a likelihood that became apparent under Obama, and whose imminent arrival the Trump administration calls a signal economic achievement.

A Glimpse of the Future Under Today’s Policies

The projections are contained in the EIA’s 2018 Annual Energy Outlook, published on Tuesday. Like all such prognostications, they depend heavily on assumptions and modeling methods, and are best thought of as case studies rather than as formal forecasts. They generally turn out to be at least partly wrong, and the agency has been criticized frequently for having low-balled the outlook for wind, solar and electric vehicles, among other blind spots.

The central projection, known as the reference case, assumes that existing policies and laws remain in place. Other projections tweak assumptions, such as economic growth rates, energy prices and the arrival of new technologies.

The long-term emission projections in this year’s report don’t differ radically from those of the past—the annual reports rarely shift gears abruptly. Some of the assumptions have changed—for example, the Clean Power Plan’s emissions rules, which Trump plans to get rid of, are no longer recognized.

Despite its limitations, the annual report is useful both as a snapshot of where we are and as a barometer of what we are likely to experience. It is the main place where energy trends are translated into climate accounting—the more so now, since under Trump the government has not issued a required periodic emissions report to the United Nations.

Generally, the report notes, the carbon footprint of the nation’s energy economy in the decades ahead will mirror its track record on using, conserving and replacing fossil fuels.

In one relatively bright spot, the report projects that energy efficiency and the use of more clean energy will lower the carbon footprint of the average American from about 16 tons to about 13 tons over the next several decades. Americans contribute more than twice as much carbon dioxide per capita as do Chinese or Europeans, and vastly more than people in poorer nations. Cumulatively, Americans have accounted for the lion’s share of the greenhouse gas that is currently in the air, warming today’s climate.

Renewables Increase, But So Does Natural Gas

The crosscurrents between various fuels and their uses can push emissions either up or down, and in this outlook they tend to cancel each other out and leave the overall curve basically flat.

The main upward pressure comes from natural gas; emissions from its booming production and use grow at an annual rate of 0.8 percent, while those from petroleum and coal decline at annual rates of 0.3 and 0.2 percent, respectively, from now until 2050, under the EIA projections. However, petroleum emissions do drift upward in the last 13 years of the forecast period, because vehicle usage is seen increasing more than efficiency does. 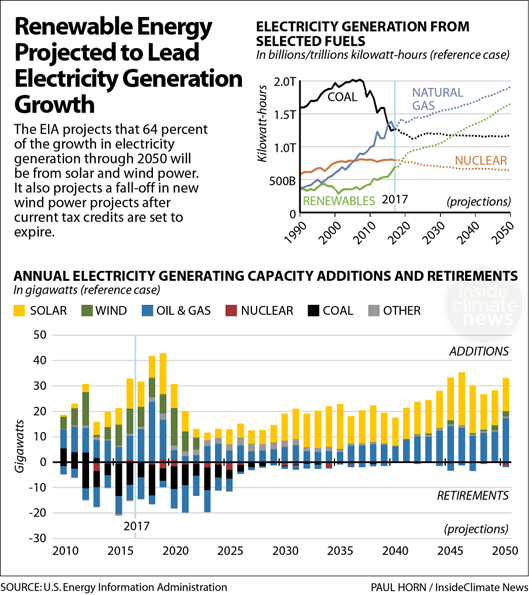 Energy-related CO2 emissions from industry grow 0.6 percent a year, more than commercial and residential emissions, which barely go up. Again, natural gas accounts for much of the rising industrial emissions, according to the EIA. The price of gas is expected to stay low, increasing its use by industry, and the emissions that ensue. While natural gas accounts for the largest share of total energy production, renewable energy sources other than hydropower grow the most on a percentage basis. Carbon-free wind and solar power account for 64 percent of the total electric generation growth through 2050.

What’s troubling about the idea of emissions staying flat for several decades is that those emissions would build up, adding more than 5 billion tons of carbon dioxide every year to the atmosphere for the next three decades or more. The gas remains there for centuries, irreversibly trapping heat.

By some estimates, the world can afford only a buildup of about 200 billion more tons of carbon dioxide before it busts its most stringent carbon budget—the total accumulation of pollution that would allow a 66 percent chance of limiting warming since the start of the industrial era to 1.5 degrees Celsius.

At the baseline rate of emissions described in this new report, the U.S. carbon footprint from this year to 2050 would add up to 179 billion tons—very close to the whole planet’s budget under those estimates, and more than what anyone could plausibly consider the nation’s fair share.