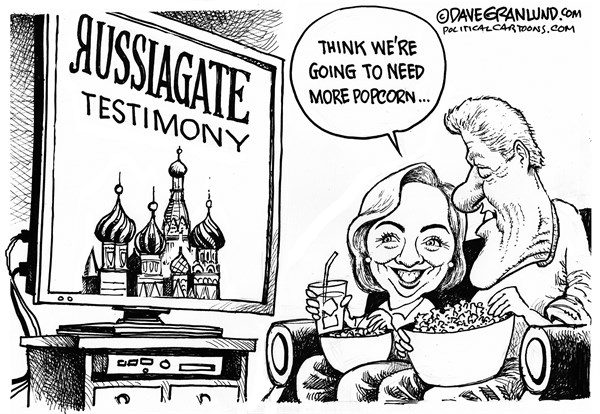 The Special counsel Robert Mueller issued an indictment (pdf, 29 pages) against 12 Russian people alleged to be officers or personal of the Russian Military Intelligence Service GRU. The people, claims the indictment, work for an operational (26165) and a technical (74455) subunit of the GRU.

A Grand Jury in Washington DC issued 11 charges which are described and annotated below. A short assessment follows.

The first charge is for a “Conspiracy to Commit an Offense Against the United States” by stealing emails and leaking them. The indictment claims that the GRU units sent spearfishing emails to the Hillary Clinton campaign and the Democratic Party organizations DNC and DCCC. They used these to get access to email boxes of John Podesta and other people. They are also accused of installing spyware (X-agent) on DNC computers and of exfiltrating emails and other data from them. The emails were distributed and published by the online personas DCLeaks, Guccifer II and later through Wikileaks. The indictment claims that DCLeaks and Guccifer II were impersonations by the GRU. Wikileaks, “organization 1” in the indictment, is implicated but so far not accused.

Note: There is a different Grand Jury for the long brewing case against Julian Assange and Wikileaks. Assange has denied that the emails he published came from a Russian source. Craig Murray, a former British ambassador, said that he received the emails on a trip to Washington DC and transported them to Wikileaks.

The indictment describes in some detail how various rented computers and several domain names were used to access the DNC and DCCC computers. The description is broadly plausible but there is little if any supporting evidence.

Charge 2 to 9 of the indictment are about “Aggravated Identity Theft” for using usernames and passwords for the personal email accounts of others.

Charge 10 is about a “Conspiracy to Launder Money”. This was allegedly done “through a web of transaction structured to capitalize on the perceived anonymity of cryptocurrencies such as bitcoin”. It is alleged that the accused mined bitcoins, channeled these through dozens of accounts and transactions and then used them to rent servers, virtual private network access and domain names used in the operation.

Note: The indictment reinforces the author’s hunch that bitcoin and other cryptocurrencies are creations and playgrounds of secret services just like Tor and other ‘cool’ internet ‘privacy’ stuff are. Its the very reason why one should avoid their use.

Charge 11 of the indictment is a “Conspiracy to Commit an Offense Against the United States”. It claims that some of the accused hacked into state boards of elections and into U.S. companies providing elections related software.

Note: Other reporting found that the alleged attack resulted in no changes to the election results or other damage.

The Unites States will seek forfeiture of the valuables the accused may have within the United States as part of any sentencing of the accused.

In February Mueller indicted the Russian Internet Research Agency, a clickbait farm run for commercial purpose, of influencing the U.S. election. The expectation then like now was that there would never be trial. In a surprise move one of the accused Russian companies, Concord Management, took up the challenge and demanded discovery. Mueller then tried to delay the hand over of evidence (which he probably does not have.) A judge rejected the attempt. The case is pending.

Deputy Attorney General Rosenstein, who announced the indictment, also made three points that will likely get little coverage. He said (video) that there are no allegations in the indictment that:

The indictment, which may well be made up and is unlikely to ever be tested in court, will reinforce the “Russia is an enemy” campaign which was launched way before the 2016 election. It will reinforce the believe of some Democrats that Russia, and not the selection of a disgusting candidate, cost Hillary Clinton the presidency.

The detente with Russia which U.S. president Donald Trump tries to achieve will now be more difficult to implement and to sustain.