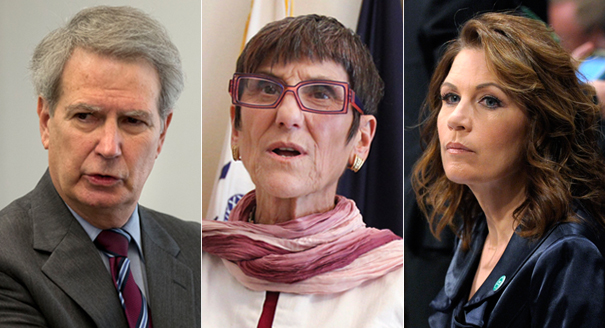 No Fast Track For TPP Says Right-Left Alliance In Congress

The three representatives are gathering lawmakers’ signatures on letters that seek to block Obama from using the fast-track process called Trade Promotion Authority, which limits Congress to up-or-down votes on free-trade agreements and bars all amendments. Every president since Richard Nixon has had that power, although it lapsed in 2007 because of a lack of major trade deals requiring its reauthorization.

The stakes are high: The Obama administration is rushing to complete the 12-country Trans-Pacific Partnership by the end of this year, and is also in the early stages of negotiating a massive pact between the United States and the European Union. Advocates say the deals together would be worth tens of billions in new U.S. exports each year – but that they could be derailed unless the president has fast-track authority to finalize an agreement without the risk of lawmakers sending it back to the drawing board.

But Bachmann, Jones and DeLauro argue that Congress shouldn’t cede any of its constitutional power to regulate commerce. Jones and Bachmann are seeking the support of the House Republican caucus for their letter, and DeLauro is looking for Democratic backing for her own. But the two letters offer the same complaint: Congress has not played enough of a role in crafting those deals.

“In light of the broad scope of today’s trade agreements, it is even more vital that Congress have a fulsome role in shaping these pacts’ terms,” DeLauro’s letter says.

“Given our concerns, we will oppose ‘Fast Track’ Trade Promotion Authority or any other mechanism delegating Congress’s constitutional authority over trade policy that continues to exclude us from having a meaningful role in the formative stages of trade agreements and throughout negotiating and approval processes,” it adds.

The new letters follow a similar one drafted in June by Rep. Mark Pocan (D-Wis.) and signed by 36 freshman House Democrats. “Congress needs to work together to get American trade policy back on track — not give away its authority to do so,” that letter said.

The letters also come as labor unions mount campaigns against the Trans-Pacific Partnership. The Communications Workers of American said hundreds of activists showed up at a rally against the deal Tuesday in Minneapolis.

The issue could come to a head this fall, when bills are expected to be introduced in the House and Senate to restore the presidential fast-track authority. Sources say the staffs of House Ways and Means Chairman Dave Camp (R-Mich.) and ranking member Sander Levin (D-Mich.), as well as Senate Finance Chairman Max Baucus (D-Mont.) and ranking member Orrin Hatch (R-Utah), have worked for months to smooth out the details.

“I want to be a partner with the administration in these efforts,” Hatch said in a July 30. “I would like to see long-term renewal of Trade Promotion Authority, so that we can take advantage of economic opportunities today and tomorrow.”

When Congress last re-authorized fast-track in 2002, it was by a razor-thin 215-212 margin in the House, with most Democrats voting no. This year the process could be further complicated because both Obama and Baucus have pushed to couple a fast-track bill with assistance for workers whose jobs are lost because of global trade.

On Obama’s side are a host of business groups lobbying for fast-track, which they say greases the wheels for trade deals while letting Congress set priorities and requirements for U.S. negotiators before the pacts are complete.

The U.S. Chamber of Commerce and its affiliated businesses have met with all freshman House members and most of the sophomore class to pitch fast-track legislation as well as the Pacific Rim and European Union trade deals, said Christopher Wenk, the Chamber’s senior director of international policy.

“This is something we’re bullish about – that we’re going to see legislation this year,” Wenk said. “It’s our top legislative trade priority. I think it’s safe to say the business community overall is very focused on this issue.”