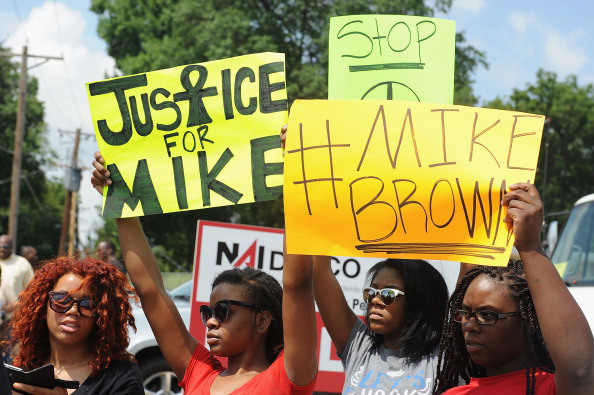 Note: Multiple news outlets are reporting that there will be no federal prosecution of former police officer Darren Wilson for his killing of Michael Brown. No announcement has been made by federal officials. The reports cite unnamed sources in the Department of Justice. The first to report the story was the NY Times which reported it on January 21st then the article appeared on their front page on January 22, their article is below.

Lawyers Will Recommend No Charges, Final Decision Is With Attorney General Holder

WASHINGTON — Justice Department lawyers will recommend that no civil rights charges be brought against the police officer who fatally shot an unarmed teenager in Ferguson, Mo., after an F.B.I. investigation found no evidence to support charges, law enforcement officials said Wednesday.

Attorney General Eric H. Holder Jr. and his civil rights chief, Vanita Gupta, will have the final say on whether the Justice Department will close the case against the officer, Darren Wilson. But it would be unusual for them to overrule the prosecutors on the case, who are still working on a legal memo explaining their recommendation.

A decision by the Justice Department would bring an end to the politically charged investigation of Mr. Wilson in the death of 18-year-old Michael Brown. The Missouri authorities concluded their investigation into Mr. Brown’s death in November and also recommended against charges.

But a broader Justice Department civil rights investigation into allegations of discriminatory traffic stops and excessive force by the Ferguson Police Department remains open. That investigation could lead to significant changes at the department, which is overwhelmingly white despite serving a city that is mostly black.

Benjamin L. Crump, a lawyer for Mr. Brown’s family, said he did not want to comment on the investigation until the Justice Department made an official announcement.

“We’ve heard speculation on cases before that didn’t turn out to be true,” Mr. Crump said. “It’s too much to put the family through to respond to every rumor.”

Mr. Wilson’s lawyer did not return calls for comment.

Mr. Brown’s death touched off protests and violent clashes between demonstrators and heavily armed police in Ferguson. The episode, along with the death of Eric Garner — an unarmed black man who died after a chokehold by a New York police officer in July — set off a nationwide discussion about policing, race and the use of deadly force.

President Obama, Mr. Holder and Mayor Bill de Blasio of New York, speaking about the issue in personal terms, said they understood the concern that minority neighborhoods had with the police. Those comments prompted rebukes from some law enforcement groups.

Soon after the shooting, witnesses told reporters that Mr. Brown had his hands up in a gesture of surrender when he was shot and killed by Mr. Wilson on a city street.

The F.B.I. investigation, however, painted a murkier picture. Mr. Wilson told investigators that Mr. Brown had tussled with him through the window of his police car and tried to grab his gun, an account supported by bruises and DNA evidence. Two shots were fired during that struggle.

What happened next, as the confrontation moved into the street, is in dispute. While some witnesses were adamant that Mr. Brown had his hands up, some recanted their stories. Mr. Wilson testified that Mr. Brown had charged at him, and other witnesses backed up his account.

“I’m backpedaling pretty good because I know if he reaches me, he’ll kill me,” Mr. Wilson told a state grand jury, in testimony that investigators said was consistent with what he told the F.B.I. “And he had started to lean forward as he got that close, like he was going to just tackle me, just go right through me.”

Mr. Holder said that the Justice Department’s investigation into Mr. Brown’s death would be independent from the one conducted by the local authorities. While the F.B.I. and local officials conducted some interviews together and shared evidence, the analysis and decision-making were separate. Mr. Holder resisted calls from local officials to announce his conclusion alongside the county prosecutor last year, in part because he did not want it to appear as if they had reached their decisions together.

Federal investigators interviewed more than 200 people and analyzed cellphone audio and video, the law enforcement officials said. Officer Wilson’s gun, clothing and other evidence were analyzed at the F.B.I.’s laboratory in Quantico, Va. Though the local authorities and Mr. Brown’s family conducted autopsies, Mr. Holder ordered a separate autopsy, which was conducted by pathologists from the Armed Forces Medical Examiner’s office at Dover Air Force Base in Delaware, the officials said.

The federal investigation did not uncover any facts that differed significantly from the evidence made public by the authorities in Missouri late last year, the law enforcement officials said. To bring federal civil rights charges, the Justice Department would have needed to prove that Officer Wilson had intended to violate Mr. Brown’s rights when he opened fire, and that he had done so willfully — meaning he knew that it was wrong to fire but did so anyway.

The Justice Department plans to release a report explaining its decision, though it is not clear when. Dena Iverson, a department spokeswoman, declined to comment on the case Wednesday.

The Ferguson investigation drew Mr. Holder into the spotlight on the issue of race, one he cares about deeply. He traveled to Ferguson, spoke of his experiences as a victim of racial profiling and emerged as a peacemaker during the tense days after the shooting, when the police used tear gas on demonstrators and the National Guard was summoned.

The shooting also inflamed longstanding tensions between Ferguson’s black residents and the police. Residents told investigators that the police used traffic citations in minority neighborhoods as a way to raise money for the city.

“These anecdotal accounts underscored the history of mistrust of law enforcement in Ferguson,” Mr. Holder said in September after returning from Ferguson, a suburb about 10 miles northwest of St. Louis.

It is not clear when the broader civil rights inquiry of the police department, known as a pattern or practice investigation, will be completed. Under Mr. Holder, prosecutors have opened more than 20 such investigations nationwide. The Justice Department recently called for sweeping changes to the Cleveland Police Department and negotiated an independent monitor to oversee the department in Albuquerque.

Mr. Wilson resigned from the department in November, citing threats of violence against him and other officers. “It is my hope that my resignation will allow the community to heal,” he said.

Mayor James Knowles III of Ferguson did not respond Wednesday afternoon to a voice mail message and email seeking comment about the broader federal investigation of his city’s police department. Jeff Small, a Ferguson spokesman, said city officials did not have any new information to share about either federal inquiry and would not comment on them.