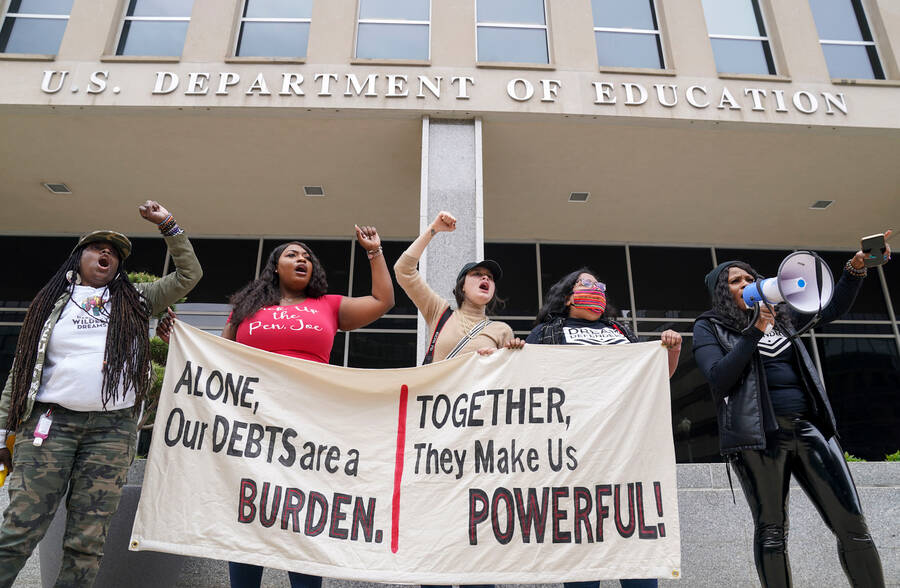 No Half Measures, We Need Biden To Cancel All Student Loan Debt

Above Photo: The Debt Collective.

The Debt Collective Has Successfully Pushed Biden To Extend The Pause On Student Loan Payments.

On September 1, 2021, Hurricane Ida hit Southeast Louisiana, temporarily displacing thousands of New Orleans residents, including myself and most of my family. Residents who had the means evacuated early, leaving others to fight for limited resources while simultaneously seeking refuge in neighboring cities. On top of their pre-existing bills, evacuees were forced to front the costs of hotels, food, gas and repairs or even replacement of their own homes. Natural disasters produce an overwhelming amount of stress and anxiety — you simply don’t know if you will have a house to live in until you are able to return home.

I don’t know how my family would have made ends meet if I was forced to cover my monthly student loan payments while struggling to meet these other, unanticipated expenses. The student loan payment moratorium has enabled myself and my family to stay afloat during turbulent and unpredictable times. We would be even better served by full cancellation of student loan debt.

As many families do, we act as a mutual aid network, sharing resources and money as it comes. When one of us is down, we all chip in to help. And when one of us is up, the wealth is shared. My mother and I both hold tens of thousands of dollars in student loan debt, so this pause has enabled us to financially assist my grandmother and father who are both on fixed incomes. Borrowers like me are channeling this money into systems of caregiving — specifically for those who are unable to keep up with the rising costs of living.

Where are other Americans putting their money during this pause? Critics claim that a cancellation of student loan debt will predominantly relieve only high-income earners who will use the “extra” money as surplus cash. In reality, a disproportionate amount of student debt is held by poor or working class families, and these families are using the relief offered by the moratorium to help them survive. Roughly 35 percent of borrowers use this money for rent and food, 31 percent use it to pay off other debts like mortgages and car payments, and 15 percent use it to pay off private student loans. Borrowers are redirecting this money to needs that might otherwise go unmet. As Americans still recover from lost wages and illness due to the pandemic, it is not an exaggeration to call these pauses life-saving.

Late last year, my fellow organizers with the Debt Collective — a debtors’ union dedicated to canceling debt — decided to plan an action for early April. We found it egregious that President Biden was planning to restart payments on May 1, since it would mean taking a huge chunk out of 45 million workers’ paychecks during a time of heightened economic insecurity. This is why the Debt Collective reminds people that debtor organizing and labor organizing are connected — debt payments are a kind of wage theft, and debt cancellation is a way of winning workers what is effectively a raise.

All winter long, we built alliances with national and local organizations, organized buses, and crafted plans for debtor’s assemblies across the country. Our action on April 4 brought together a broad coalition of debtors and allies, who gathered in front of the Eisenhower Memorial near the Department of Education to proclaim that student loan debt is a crisis that disproportionately affects low-income borrowers, Black (specifically Black women) and Brown borrowers, and first-generation college students. Combining music, dance, visual arts, passionate messages, and testimonies, the action sent a compelling message to the Biden White House.

Two days after this action outside the Department of Education, the Biden administration announced that it would extend the pause on student loan payments. Since the beginning of the student loan moratorium, which began after the onset of the pandemic in March 2020, student loan payments have been extended six times, with this last extension shifting the restart from May 1 to August 31. In the weeks since, the administration has sent signals of potential debt cancellation to come. In late April, Biden announced that he was “considering dealing with some debt reduction” but added the amount would not be $50,000, as some advocates have called for.

Now, the question appears to be shifting from whether or not the White House will cancel any student debt to how much — and through what means. If Biden plans to simply cancel up to $10,000 in debt and route it through a set of bureaucratic, means-tested hoops, as has been reported, he will likely lose support among young voters, which the Democratic Party needs leading up to midterm elections. Even worse, he will squander the opportunity to actually improve millions of working people’s lives. The past two years have proved what the Debt Collective has been saying for almost a decade: the government does not need this money (student debtors have not made payments for two years and the sky hasn’t fallen). What’s more, full cancellation is not regressive: households with the lowest wealth would benefit the most from full cancellation.

If you carry student loan debt, are you happy that your payments haven’t restarted? Relieved that you don’t have another bill on top of rising gas and food prices? Dreaming of the possibility that full cancellation is around the corner? If the answer to any of these questions is “yes,” thank an organizer.

Organizing helped make this extended pause possible, and organizing can also make full cancellation a reality. Kicking the can down the road — which was demonstrated by protestors who literally kicked cans attached to strings as they marched around the Department of Education during the Debt Collective action — will not get us closer to full cancellation.

The material benefits of this pause to student loan payments are not something to be taken lightly. But considering the pause has clearly helped borrowers survive, the question for the Biden administration is simple: Why not make it permanent, and cancel all student debt?