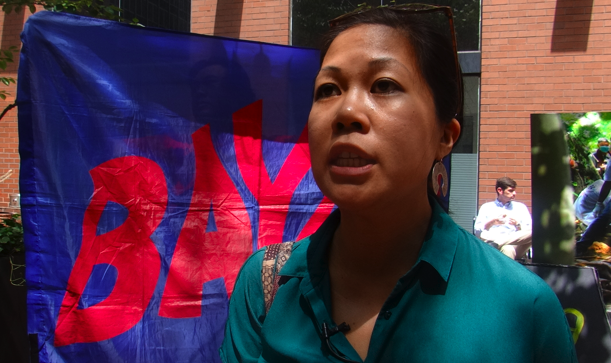 A crowd gathered at 313 E 43rd St. yesterday in NYC in front of the Malaysian Consulate to express outrage to the fact that despite the fact that Malaysian police discovered 28 suspected human trafficking camps located about 500 meters from the countries northern border AND 139 graves of trafficked persons, within weeks, Monday, July 27th, the State Department upgraded Malaysia from Tier 3 to Tier 2 on the Trafficking in Persons list in a cynical ploy to circumvent legislation prohibiting Fast Tracking of trade deals with Tier 3 nations. Malaysia is one of the 12 nations negotiating the Trans-Pacific Partnership, so Malaysia’s Tier 3 status would have prevented TPP from being Fast Tracked. Human rights group are outraged by the upgrade, which comes just two months after the discovery of human trafficking camps and mass graves of trafficked person in Malaysia.

The flier goes on to read,, The U.S. decision to remove Malaysia from the worst category in its 2015 Trafficking in Person report, released yesterday, has drawn flak from anti-trafficking groups and activists.

– I don’t know if it’s just me but, to live in a time where people need to be ANTI- Human Trafficking shows how far off course the human race has gone. That some people are Anti-Human Trafficking, what does that mean for the other people? Clearly, that they are Pro-Human Trafficking, the buying and selling of Human Beings for sex & work so others can make a “profit”.

From the United Nations Office on Drugs and Crime Human Trafficking is described,

What is Human Trafficking?

Article 3, paragraph (a) of the Protocol to Prevent, Suppress and Punish Trafficking in Persons defines Trafficking in Persons as the recruitment, transportation, transfer, harbouring or receipt of persons, by means of the threat or use of force or other forms of coercion, of abduction, of fraud, of deception, of the abuse of power or of a position of vulnerability or of the giving or receiving of payments or benefits to achieve the consent of a person having control over another person, for the purpose of exploitation. Exploitation shall include, at a minimum, the exploitation of the prostitution of others or other forms of sexual exploitation, forced labour or services, slavery or practices similar to slavery, servitude or the removal of organs.

In a world ruled by the Addiction and Mental Illness of Corporations and Banksters and never ending “profit” and any cost, this is what we get.

The Press Conference was intended to tell Congress, the Obama Administration, the Malaysian government, and the media that people will not allow human rights to be compromised in the name of “free trade!”

In the annual report produced by the State Dept. to assess and rank the efforts taken by 188 countries in fight to modern slavery and trafficking, the Southeast Asian country has been upgraded from Tier 3, the worst ranking, to Tier 2. Countries in tier 2 fail to comply with minimum standards but, are said to be making signifiant efforts. Charles Santiago, a Malaysian Member of Parliament and anti-trafficking activist said, he believed the upgrade was a political decision to facilitate Malaysia’s participation in the TPP, Trans Pacific Partnership, a massive free trade deal with Malaysia and 11 other countries across southeast Asia being pushed by Barack Obama. The goal is to counter China’s growing influence in the region. Recent legislation enacted by Congress to give Obama fast-track authority to negotiate the trade deal prohibits him from doing so with countries in tier 3. With Malaysia still in tier 3, it would jeopardized the entire trade deal due to Malaysia being a key player in the region.

The Reverend Stephen Phelps from the Riverside Church was one of the speakers at the rally and also Bernadette Ellorin from BAYAN-USA and Adam Weissman from Global Justice for Animals and the Environment which can be seen in the video https://youtu.be/778pz4gpnEY

CALL your Senators and US Reps, and Reject TPP with Human Rights Violator MALAYSIA and Speak out against the State Depts cynical, political motivated upgrade of Malaysia, FIND OUT WHO represents you at http://tradejustice.net/leg.

SIGN letters to your members of Congress and to Obama online at http://tradejustice.net/maletters

Write to Congress at: http://bit.ly/TPPTrafficking