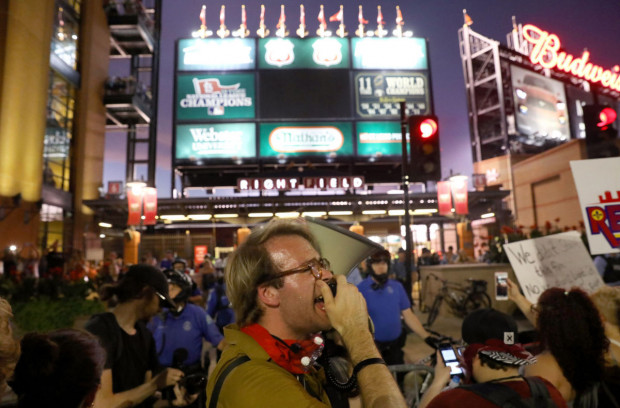 Above Photo: By Christian Gooden

ST. LOUIS • A crowd of a few hundred protesters took to Broadway near Busch Stadium Thursday night as thousands of people were filing in for a Billy Joel concert there, but the concert went off without problems.

The group gathered at Kiener Plaza just two blocks from the stadium and, at about 7 p.m., peacefully marched onto Broadway at Market Street, blocking traffic as they headed south. Among the chants of the group, which was overwhelmingly white, were: “White silence is violence.”

They regrouped at the east entrance to the stadium.

They were being closely watched by police, who were stationed throughout downtown.

The concert got underway as scheduled and once the first song, “My Life,” drowned out the protesters’ chants, many of them headed back toward Kiener Plaza. Several again blocked Broadway and Market.

The chants also included “Out of the county and into the streets.”

Alexandria Lane-Detwiler of Chesterfield was among the protesters. “I can’t sit at home in my privilege and not come out,” she said.

Onstage, Joel made reference to the unrest.

“Good evening, St Louie,” he said early on. “Glad you made it. I know things have been a little tense around here.”

At one point, a couple of protesters appeared to be attempting to block a police SUV in the street, but they were pulled away by organizers of the protest.

Danielle Williams, 19, joined the protest along with a friend. The St. Louis resident said she was happy to see that it had drawn a largely white crowd.

She said she has felt a lack of empathy for the concerns of black urban residents like herself from others who don’t share her skin color and don’t live in the city.

“They’re not trying to understand,” she said. “They don’t get it because they don’t live where we live.”

Candy Voyd, 64, says she lives in The Ville, a historically African-American neighborhood in north St. Louis. As the protest wound down, she noted that police had kept their distance from the marchers. She said she believed it was because most of them, like her, were white.

She said she doesn’t think most white Americans see that other races are treated differently. “They need to wake up,” she said.

Hours earlier, officials had taken precautions to prevent potential protests from disrupting the concert. Barricades were erected around the stadium. The marchers were being kept outside the barricades.

Over the weekend, concerts by U2 and Ed Sheeran had been canceled due to issues related to protests.

Several people interviewed as they were leaving Joel’s performance said they hadn’t seen or heard the protesters outside.

Julie Schott of Wentzville said that while she was inside the stadium she was aware of the protest outside “only because I got texts from a couple of friends while I was in there.”

Earlier Thursday, a crowd of about 200 protesters briefly blocked traffic at Skinker Boulevard and Clayton Road on the western edge of the city.

Some of the protesters also briefly went into the Cheshire inn that is in the southwest corner of the intersection.

Police officers formed a line to prevent the group from entering Highway 40 (Interstate 64) and ordered the crowd that had begun gathering at 3 p.m. to disperse. After about 30 minutes, the protesters moved off the street and into nearby Forest Park.

The protesters chanted “No justice, no profits” and many of them held signs referencing the Black Lives Matter movement. Police said protesters cleared the intersection, and while a bottle containing a red substance was thrown at officers, no one was injured and no one was arrested.

The protest marks a seventh day of demonstrations and other events in response to a judge’s decision finding a former St. Louis police officer Jason Stockley, who is white, not guilty of first degree murder in the shooting of drug suspect Anthony Lamar Smith, who was black, after a car chase in 2011. That decision was issued Friday.

The Rev. Darryl Gray, chairman of the Social Justice Committee of the Missionary Baptist State Convention, was among the protesters.

“The people made it clear from Day One after the verdict that there will be civil disruption, disobedience and disturbance that will disrupt the financial economy and the peace,” he said.

He says clergy are supportive of the protest.

“We will continue to do this until the protest leadership see changes in the St. Louis Police Department,” Gray said.