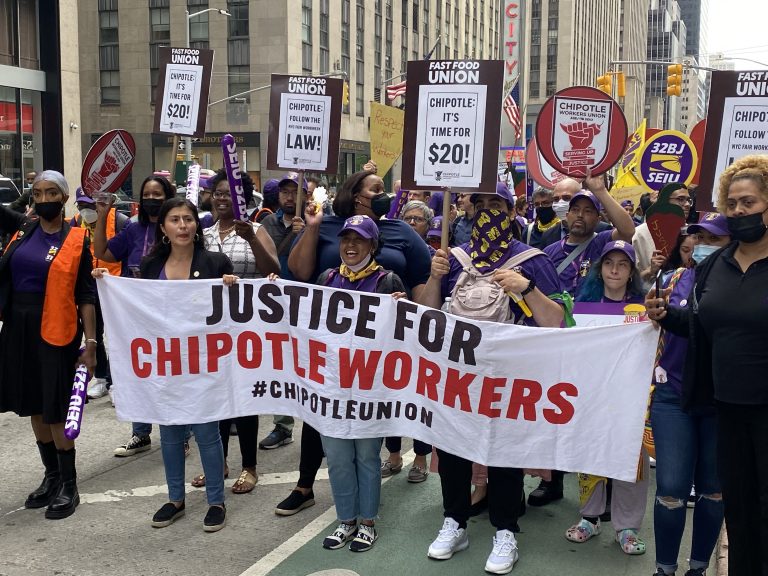 Above Photo: Chipotle workers and members of SEIU Local 32BJ marched through Midtown on Thursday joined by State Senator Jessica Ramos (second from left), Chair of the Senate Labor Committee.

Chipotle Workers Hold Midtown March to Demand $20 an Hour and a Union.

Midtown, New York City, New York – SEIU Local 32BJ held a rally and march yesterday in support of Chipotle workers seeking unionization, reliable scheduling and a raise in pay to $20 dollars an hour. The purple-clad procession gathered at 6th Ave. and 48th St., near the NewsCorp headquarters and Fox Square.

Leaders of the local, including Executive Vice President Denis Johnston, addressed the crowd, alongside members of the New York City Council, the State Senate and the State Assembly. Councilwoman Julie Menin (District 5) and Councilman Lincoln Restler (District 33) voiced their support for the $20 dollar wage.

Assemblymember Linda Rosenthal (AD-67), alongside a group of fellow state representatives, criticized Chipotle for its flagrant abuses of the “Fair Workweek Law,” a law that requires fast-food employers to provide regular schedules to workers regardless of their immigration status.

“I’m not disposable,” said one Chipotle worker, “and neither is my labor and neither are my coworkers.”

“Chipotle has to learn it does not get a free pass to sidestep the New York City Fair Workweek Law,” said Assemblymember Rosenthal. “We see at stores and chains like Starbucks, workers rising up and saying ‘we will form a union. We deserve more; otherwise go find someone else to pour that coffee.’ And we need to say the same thing here. Workers deserve respect, dignity and most of all, money to feed their families for a good day’s work.”

Speaking on the pay disparity between the workers of Chipotle and its CEO Brian Niccol, State Senator Brad Hoylman (SD-27) said, “Mr. Niccol made more than 1,700 times than the average company worker, just from bonuses alone, in 2020.” Senator Hoylman also restated his support as a co-sponsor for State Senator Jessica Ramos’ State Bill 3062c, which would raise the minimum wage annually by a percentage reflective of inflation. “With my colleagues in government, we have your back.”

Assemblymember Phara Souffrant Forrest (AD-57), a socialist facing fierce establishment opposition in the upcoming Democratic primary, said, “Before I joined the legislature, I was a union nurse. So I’m here to remind all companies in New York City — this town is a union town!”

Referring to Chipotle’s reported 600,000 violations of labor laws within the last two years, she said, “We passed laws to make sure we protect our most valuable people, the workers. And so when we have Chipotle violating these laws, we stand up and we fight back! We are here to demand that Chipotle not only pay $20 an hour, not only respect the [Fair Workweek Law] but also recognize that 23BJ is essential, Chipotle workers are essential, everybody who clocks in and earns an honest dollar is essential!”

At the conclusion of the speeches, the crowd occupied 6th Avenue and headed north to 56th Street. A police escort directed and halted traffic as the hundreds of workers shouted “no justice, no tacos!”

New Yorkers, either walking past or enjoying a meal in the now familiar outdoor seating options of restaurants, watched on and filmed the march.

A separate podium was already prepared at the intersection of 6th Ave. and 56th St., positioned directly in front of a Chipotle. Union members and workers spread out to cover the corners of the streets and crosswalks, hoping to inform passersbys and create a soft, temporary picket line.

Alyssa Roman, 21, a Chipotle worker and expectant mother, took the microphone. “Now that I’m pregnant, it’s not just myself I need to defend for. Listen, you can mess with me, but when you mess with my child I promise you it’s over,” she said. Speaking of her leadership role with 32BJ in this campaign, Roman said “I may be small but my voice is very powerful. I’m not disposable and neither is my labor and neither are my coworkers.”

Julian Mitchell-Israel, a field director for the new Amazon Labor Union, shared words of solidarity with the Chipotle workers. “Just like we are fighting on Staten Island, we have your back. One union, one fight.” Speaking to Mitchell-Israel after the event, he restated the need for solidarity between working class people in all industries and jobs. “The working class, right now, we’re in an economy where you switch from job to job…The fact is, in New York City the working class is something that one year is working at Amazon, the next year is working at Chipotle, the next year is working at McDonalds, and then Walmart. This fight is about every single company having to be held accountable across the industries, across the board, because if we aren’t all in the same fight together — if we aren’t all getting the same wages, the same better working conditions — we aren’t going to be able to hold the billionaires accountable, we’re never going to be able to build true worker power.”

Micheal Agilar, an ALU organizer, said “At the end of the day, we’re all in this together. We make these companies rich, without us they can’t win anything, they can’t gain anything.”

Waiters, doormen, and staff watched on as the march made its way uptown, clapping or simply observing with a smile on their face.

More elected officials spoke to the crowd, including Councilwoman Gale Brewer (District 6) and Assemblywoman Latoya Joyner (AD-77), Chair of the Assembly’s Labor Committee. Senator Jessica Ramos (SD-13), Chair of the Senate’s Labor Committee, warned Chipotle to cease violating the laws passed in the state and city to protect workers. “Chipotle, let me tell you, from the State Senate, we’re watching you! My eyes are on you!”

At the conclusion of the speeches, at around 4:30 p.m., a group of Chipotle workers, members of 32BJ and political allies including Senator Ramos, sat down and linked arms in the middle of the intersection. The NYPD watched on as their robotic PA system delivered it’s warning, “If you remain in the roadway and refuse to utilize the sidewalk, you will be placed under arrest and charged with disorderly conduct.” At the conclusion of the robot’s preprogrammed speech, the police moved in and began placing the demonstrators in handcuffs. The chants and drums from the crowd continued on as the arrested were led to vans, searched and photographed by the officers.

Some of the Chipotle workers, including Alyssa Roman, cheered on their coworkers and filmed their processing by the arresting officers. The workers smiled and laughed, some joining the chants of the crowd even as they were marched into the van. The large majority of workers present were people of color, as were those willingly placed into custody.

Brenda Garcia, a worker at a Chipotle in Queens, spoke with The Indypendent as her coworkers were placed into custody. Regarding her lack of scheduled hours, she said “There’s a lot of favoritism going on, a lot of racism too. I don’t know what my [general manager] has against me, but I know for sure that it has to do with my race. He’s been giving hours to people he’s more friends with. So that’s not fair for me because people like us work hard to make our hours and we try our best.” On what the union can provide her and her fellow Chipotle workers, she said, “Give justice. Not to just us but for other people and the new generation. We don’t want our kids going through the same thing we’re going through, so that needs to change today.” To Chipotle, she offered simple demands: “Pay us well. Give us good benefits. Pay us with respect.”

As the last of the 11 demonstrators were placed into custody, the crowd began to taper off. I spoke to a member of Local 32BJ about their aims in this action and their efforts with Chipotle workers in general. “The workers are all organizing and we’re trying to amplify their efforts and use our resources so we can help them, ultimately, have the union.”

On the matter of Chipotle’s actions against the workers connected to the union drive, they said “We’ve been supporting individual worker actions at stores. We had a worker who was terminated. They never say the reason was because you’re in the union; they say it’s ‘because you’re late, you called out sick, you’re not working hard enough!’ They find some reason to discredit the work of the workers and find a reason to exclude them from the store.”

As the members of the union packed up their equipment and the majority of supporters left the scene, pedestrian and street traffic resumed and the city continued on its day. The section of 6th Ave. that was host to the day’s events contains numerous businesses ranging from restaurants to hotels. At each one, waiters, doormen and staff watched on as the march made its way uptown, clapping or simply observing with a smile on their face.