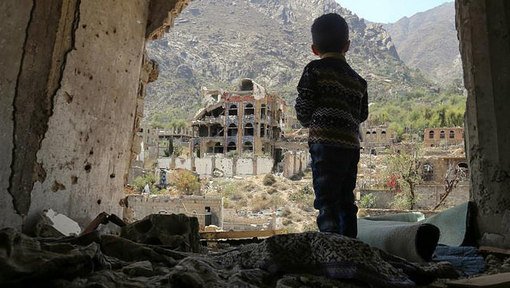 No Liberal Rallies Yet For The Children Of Yemen

Hundreds of thousands of people showed up across the United States at more than 600 gatherings three weeks ago. They came out to protest Donald Trump‘s “zero tolerance” immigration policy in highly choreographed, Democratic Party-affiliated “Families Belong Together” rallies and marches. Liberal celebrities marched and spoke. Local, state, and federal Democratic Party politicians and office-holders gave passionate speeches denouncing Trump’s separation of Central American migrant children from their parents at the southern U.S. border.

Marchers carried signs expressing their concern for children and families. Here are some of the messages written on the posters displayed at these gatherings:

“Do All Lives Still Matter?”

“What Would Mr. Rogers Say?”

(The issue that sparked this remarkable outpouring has already been pushed off the front pages and the cable news headlines by the resurgent RussiaGate story, brought to new intensity by Trump’s “spectacular debacle” alongside Vladimir Putin in Helsinki, Finland. It is a victim of the all-powerful “now we see you, now we don’t” U.S. news cycle – this even as nearly two-thirds of the migrant children criminally separated have yet to be reunited with their parents and as evidence emerges that the Trump administration intended for the family separations to be permanent.)

We have yet to learn of any large and widespread U.S. demonstrations on behalf of the children and families of Yemen, where the U.S. is deeply complicit in the creation of a situation that “looks,” in the words of the United Nations’ humanitarian chief, “like the Apocalypse.” UNICEF reported last year that a child dies from preventable causes on the average of once every 10 minutes in Yemen.

As the Associated Press (AP) reported last May, roughly 3 million Yemeni women and children are “acutely malnourished; another 400,000 children are fighting for their lives.” Further:

“Nearly a third of Yemen’s population — 8.4 million of its 29 million people — rely completely on food aid or else they would starve. That number grew by a quarter over the past year…Aid agencies warn that parts of Yemen could soon start to see widespread death from famine. More and more people are reliant on aid that is already failing to reach people. …It is unknown how many have died, since authorities are not able to track cases. Save the Children late last year estimated that 50,000 children may have died in 2017 of extreme hunger or disease (emphasis added), given that up to 30 percent of children with untreated cases of severe acute malnutrition die.”

The AP told the heartbreaking story of Umm Mizrah and her children, tragic drops in the bucket of what could become one of the biggest humanitarian catastrophes of the last half-century:

“The young mother stepped onto the scale for the doctor. Even with all her black robes on, she weighed only 84 pounds …The doctor’s office is covered with dozens of pictures of emaciated babies who have come through Al-Sadaqa Hospital in Aden …Mothers like Umm Mizrah…skip meals, sleep to escape the gnawing in their stomachs. They hide bony faces and emaciated bodies in voluminous black abaya robes and veils…The doctor asked the mother to get back on the scale holding her son, Mizrah. At 17 months, he was 5.8 kilograms (12.8 pounds) — around half the normal weight for his age. He showed all the signs of ‘severe acute malnutrition,’ the most dire stage of hunger. His legs and feet were swollen, he wasn’t getting enough protein. When the doctor pressed a finger into the skin of his feet, the indentation lingered.”

Things have gotten worse in the last two and half months. According to Lisa Grande, head of the UN humanitarian effort in Yemen, “8.5 million people that we describe as being pre-famine… when they wake up in the morning, they have no idea if they will eat that day…by the end of this year, another 10 million Yemenis will be in that situation.”

Two and a half weeks ago, special PBS correspondent Jane Ferguson related the plight of Maimona Shaghadar, who “suffers the agony of starvation in silence. No longer able to walk or talk, at 11 years old, little Maimona’s emaciated body weighs just 24 pounds…Every day,” a nurse told Ferguson in a remote Yemen hospital, medical personnel “see these sorts of cases.”

Cholera, a prominent 19th-century disease, has become epidemic there, thanks to the collapse of water sanitation. Cholera has already killed thousands of Yemeni civilians, children especially, and a million Yemenis are currently infected. Yemen is now home to what Ferguson calls “the worst cholera outbreak in modern history. Now every time the rains comes, people fall ill.”

The cause? In “mainstream” U.S. media, the Yemeni children and families suffering this near “apocalypse” are victims of a three-year-old war between Yemen’s Iran-backed Shiite Houthi rebels who hold the country’s north, and a Saudi Arabian-led coalition, armed and backed by the United States. But there is little evidence of significant Iranian involvement in Yemen. The desperately poor nation’s “civil war” is a remarkably one-sided affair in which the world’s only Superpower (the United States) has been providing critical support for what amounts to the crucifixion of millions of innocent children and families. Combined with a vicious economic blockade, the US-Saudi coalition’s relentless bombing campaign has collapsed Yemen’s economy, leaving two-thirds of the population to depend outside on food aid for survival. The air onslaughts have devastated much of Yemen’s basic infrastructure so that more than half the population lacks access to safe drinking water – the key cause of the cholera epidemic. In a recent trip deep into Yemen’s countryside, Ferguson found a Doctors Without Borders cholera treatment center that had been crushed into rubble by a U.S.-Saudi airstrike the day before – an obvious war crime. “It was just about to open its doors to patients,” Ferguson reports.

“The aerial bombing campaign has not managed to dislodge the rebels, but has hit weddings, hospitals and homes. The U.S. military supports the Saudi coalition with logistics and intelligence. The United States it also sells the Saudis and coalition partners many of the bombs they drop on Yemen. In the mountains outside the capital, we gained exclusive access to the site where the Houthis store unexploded American-made bombs, like this 2000-pound Mark 84 bomb made in Garland, Texas. It landed in the middle of the street in the capital, we are told.”

That was before he U.S.-Saudi forces, with the Trump administration’s approval, decided to launch an offensive against the Red Sea port city of Hodeidah, through which almost all the food and medicine coming into Houthi-held Yemen passes. As Al Jazeera reported three days ago, the UN is warning that “the humanitarian crisis in Yemen is worsening as tens of thousands of families are displaced by the Saudi-UAE coalition offensive to retake the strategic port city….the relentless air raids and lack of aid are making an already dire humanitarian crisis even worse for the civilians who live in the region….tens of thousands of families have been displaced from Hodeidah as a result of the fierce fighting.

The U.S. is involved in direct as well as indirect assault on Yemen. Yemen was home to the first known U.S. drone attack outside Afghanistan in 2002. Hundreds of U.S. drone and other airstrikes have targeted Yemen since 2009.

Trump drew his first military blood in Yemen. U.S. Navy special forces carried out a raid—planned by the Obama administration and handed off to the incoming Trump team—that killed 25 civilians, including 10 children in the mountainous Yakla region of Yemen’s Al Bayda province. One of the children killed was an 8-year-old girl, Nawar al-Awlaki, daughter of the Islamist preacher Anwar al-Awlaki, who was killed on Barack Obama’s orders in a September 2011 U.S. drone strike in Yemen. Nawar’s older brother, 16-year-old Abdulrahman, was killed in a second Obama-commanded drone strike soon afterward.

A PBS NewsHour report earlier this month describes the Yemen tragedy as a “man-made” catastrophe. A more historically specific characterization would be “Empire-made” or “Washington-made.” As Bill Van Auken accurately reported on the World Socialist Web Site five weeks ago:

“This total war against an entire population…would be impossible without the uninterrupted support—military and political—of US imperialism since its outset…The US, together with its main NATO allies the UK and France, has supplied the planes, warships, bombs, missiles and shells used to devastate Yemen and slaughter its people. In his eight years in office, President Barack Obama presided over some $115 billion in arms sales to the monarchical dictatorship in Riyadh. The Trump administration, which has sought to forge an anti-Iran axis with Saudi Arabia, the other reactionary Gulf oil sheikhdoms and Israel, has touted arms deals with Riyadh that potentially would amount to $110 billion.”

“The Pentagon has given direct and indispensable aid to the Saudi-led onslaught, providing midair refueling for the planes that bomb Yemeni civilians, staffing a joint command center in Riyadh with US intelligence and logistics officers and reinforcing the Saudi-UAE blockade of the country with American warships. Recently, US Green Berets have been deployed with Saudi ground forces to assist in their anti-Yemen operations. Under the banner of the ‘war on terror,’ the Pentagon is waging its own air war in Yemen, conducting at least 130 air and drone strikes in 2017, quadruple the number in 2016…The Trump administration gave the go-ahead for the current siege of Hodeidah Pentagon officials have reported that US officers are helping to select targets in the port city.”

The Trump administration’s funding and equipping of the savage war on Yemen shares three key characteristics with the “zero tolerance” immigration policy that Trump was recently forced to (partially and haltingly) rescind. First, it unconscionably uses innocent children and families as hostages and pawns in the advance of White House policy goals.

Second, it is richly consistent with U.S. policy stretching far back in history (see this on the long U.S. record of family separation and thison the long U.S. history of directly and indirectly attacking and killing children and other civilians in foreign nations).

Third, it is consistent with Barack Obama’s record. The Obama administration backed the Saudi-led Arab assault on Yemen. It also (as few marching against Trump’s border policy seem to know or care) responded to Central American migration and asylum-seeking with a policy of aggressive deterrence and detention – a policy that included the caging of children.

Why No Mass Marches for Yemeni Children?

Clearly the murder of tens of thousands of (Yemeni) children is a bigger crime than the undoubted transgression of traumatically if (hopefully temporarily) separating 2300 Central American children form their migrant parents. Why don’t hundreds of thousands of U.S.-Americans march on behalf of Yemeni children and families killed, maimed, starved, sickened, and otherwise placed at grave risk by Washington and its Arab allies?

Differences of geographical proximity and familiarity are part of the explanation. Equally if not more significant: the dominant U.S media’s systematic under-reporting of U.S, imperial aggression in the Middle East; that media’s portrayal of is the Yemen war as a regional Sunni-Shia and Saudi-Iranian conflict in which the U.S. is only peripherally involved; the Yemeni victims’ status as Muslim Others who are linked in the dominant U.S. media and politics culture with the officially U.S,- and Israel-demonized state of Iran (a nation that all too unmentionably looks like a model of democracy, social justice, and women’s rights in comparison to its regional arch-enemy and Washington’s “good friend” the absolutist and arch-reactionary state of Saudi Arabia). For these and other reasons, the Democratic Party establishment sees no political advantage in confronting Trump on U.S. Yemen policy, a policy in which both reigning U.S. political parties are deeply complicit.