This photo was taken from Gangjeong village on Jeju Island, South Korea as the US and South Korea prepare for Navy ‘International Fleet Week’ which will bring legions of US and its allies warships to the formally pristine waters off Jeju.

The purpose of this naval display is to show China and Russia that the US ‘owns the Pacific’.

Protests continue in Gangjeong village just outside the gates of the Navy base that local villagers and their supporters have been campaigning against for more than 11 years on a daily basis.  Even though the base is now operational the peaceful people have not given up and continue to resist the military madness. 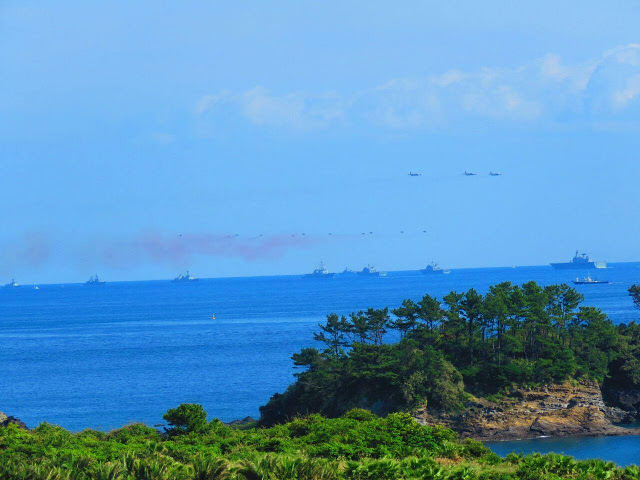 As North and South Korea currently meet to reduce the militarization on the Korean peninsula this is the very worst time for the US to organize such a provocative naval display of power.  But obviously the US is doing all it can to torpedo the peace talks between the Korean people – north and south.

The people on Jeju Island were given no warning nor asked their opinion about Fleet Week which is officially scheduled from October 10-14 but obviously has already begun with warships and planes currently encircling the island.

We must all stand in complete solidarity with the peace movement in South Korea as they work to stop aggressive US military operations in their country.

No Navy base on Jeju Island!  No Fleet Week!  Peace and Reunification on the Korean peninsula!