No Need To Wait For Pandemics: The Public Health Case For Criminal Justice Reform

Critical Resistance shared the article below in an email. In the email they make they refer to  the Health Affairs journal which notes, “Prisons push people into the path of pandemics.” They are by nature unsafe and unhealthy institutions; with meager access to healthcare at best, and routine negligence and violence as the norm, imprisoned people will likely be among the hardest hit by COVID-19.

Critical Resistance urges the release of elderly prisoners and those with medical needs, as well as reducing the number of people coming into jails, and stopping the practice of re-arresting and imprisoning people for technical probation and parole violations. They also point to Iran which has released 70,000 prisoners, approximately 30% of their entire prison population, to mitigate the spread of the disease in prisons.

Judges in Cuyahoga County Court, Ohio are releasing dozens of inmates following a special hearing due to the coronavirus. The judges agreed to release a total of 38 inmates incarcerated for cases “involving low-level, nonviolent offenses.” The decision is based on concern about the spread of the  coronavirus spread. Twenty-nine recently arrested inmates also raise concerns for officials because some could be carriers of the coronavirus and spreading throughout the jail. Cuyahoga County Common Pleas Judge Brendan Sheehan explained that in making the decision “We balanced the need to protect the public and the safety of our inmates.”

The New York Times reports that “Across the country, only a small number of courts and justice systems appear to have significantly adjusted their procedures to guard against the coronavirus pandemic. And that is putting tens of thousands of people at risk for no good reason.”

The Cuyahoga county jail is studying the possible release of hundreds of inmates, citing spacing concerns and the possibility of a COVID-19 contagion. Jail director Julia Bruner coordinated with Metro Health to get a list of 325 inmates. Most of these were deemed at serious risk of illness. Most of these inmates included older ones with a history of respiratory issues and chronic illnesses. They are also low-level offenders, most of which are expected to be released following the Saturday hearings. Judge Sheehan, clearly looking forward to keeping inmates safe, said that he hoped to release up to 300 low-level offenders, saying that the questions of COVID-19 infecting the inmates were a “matter of when not if.”

In San Antonio, TX, a Bexar County Judge says County suspending arrests for minor offenses so as to not crowd jail during the public health emergency. Minor offenses, many of which should not even be crimes, should not be resulting in people going to jail when there is no public health emergency. It is counterproductive to the person involved, their family and their communities.

The district attorney in Seattle, Dan Satterberg, said his office was filing only serious violent cases.

The Times asks “There are at least 450,000 people locked up at any time around the country for brief periods — the vast majority awaiting arraignment or because they can’t make bail, often small amounts. Why put them at risk and introduce the possibility that they will bring the virus home?”

The pandemic is exposing many faults in US policy and the economy. When it comes to criminal justice, it is an opportunity to rethink how the US treats low-level offenses, which account for more than 60 percent of arrests nationally. Many of these offenses should be decriminalized or made legal, e.g. legal marijuana for adults, not only during the pandemic, but after it is over.
KZ

We offer five examples of policies that could slow the spread of a viral pandemic in prisons and jails – and would mitigate the everyday impact of incarceration on public health.

The United States incarcerates a greater share of its population than any other nation in the world, so it is urgent that policymakers think about how a viral pandemic would impact people in prisons, in jails, on probation, and on parole, and to take seriously the public health case for criminal justice reform.

Below, we offer five examples of common sense policies that could slow the spread of the virus. This is not an exhaustive list, but a first step for governors and other state-level leaders to engage today, to be followed by further much-needed changes tomorrow.

Quick action is necessary for two reasons: the justice-involved population disproportionately has health conditions that make them more vulnerable, and making policy changes requires staffing resources that will be unavailable if a pandemic hits.

The incarcerated and justice-involved populations contain a number of groups that may be particularly vulnerable to COVID-19, the novel coronavirus. Protecting vulnerable people would improve outcomes for them, reduce the burden on the health care system, protect essential correctional staff from illness, and slow the spread of the disease. 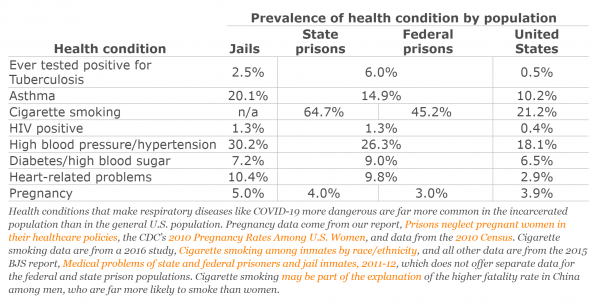 Here are five places to start:

There is one more thing that every pandemic plan needs to include: a commitment to continue finding ways — once this potential pandemic ends — to minimize the number of confined people and to improve conditions for those who are incarcerated, both in anticipation of the next pandemic and in recognition of the every day public health impact of incarceration.

None of the ideas in this briefing are new. All five are well established criminal justice reforms that some jurisdictions are already partially implementing and many more are considering. These ideas are not even new to the world of pandemic planning, as we found some of them buried in brief mentions in the resources listed below — albeit after many pages about the distribution of face masks and other technical matters. Correctional systems need to be able to distribute face masks to the people who need them, of course, but making urgent policy decisions about changing how and where you confine people is not something that should be relegated to a sentence about how agencies may want to “consider implementing alternative strategies.”

The real question is whether the criminal justice system and the political system to which it is accountable are willing to make hard decisions in the face of this potential pandemic, in the face of the one that will eventually follow, and in the context of the many public health costs of our current system of extreme punishment and over-incarceration.

Appendix: Other resources for practitioners

While preparing this briefing, the Prison Policy Initiative identified some resources that may be helpful for facilities and systems that may be starting from scratch on a COVID-19 response plan, which we share below. This list is not intended to be comprehensive, and will hopefully soon be out of date as other agencies update and share their own plans: