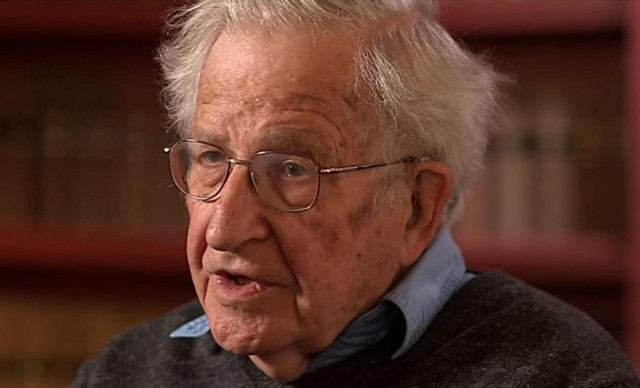 Noam Chomsky: AntiFa Is ‘A Major Gift To The Right’

Above photo: The eminent intellectual, who is described as the father of modern linguistics, argues the movement is self-destructive BBC Newsnight

Noam Chomsky has criticised the anti-fascist movement and argued its actions are wrong in principle and it is a “major gift to the right”.

The eminent intellectual, who is described as the father of modern linguistics, argued the movement was self-destructive and constituted a tiny faction on the periphery of the left.

Antifa, shorthand for anti-fascist organisations, refers to a loose coalition of militant, decentralised, grassroots groups which are opposed to the far-right.

The movement, which was founded in Europe in the 1920s, has dominated headlines in the wake of a white supremacist rally in Charlottesville earlier this month. Neo-Nazis, KKK members and “alt-right” supporters clashed with anti-fascists and a woman was left dead after a car ploughed into a crowd of anti-fascist protesters.

In the wake of the deadly violence, President Donald Trump has prompted anger for drawing a moral parity between white supremacists and anti-fascists, saying counter-protesters were as violent as the far-right and the “alt-right” groups included some “very fine” people.

Chomsky, a leading voice on the left who is famed for his critique of US foreign policy, neoliberalism and the mainstream media, has now criticised Antifa.

“As for Antifa, it’s a minuscule fringe of the Left, just as its predecessors were,” the linguist and political philosopher told the Washington Examiner.  “It’s a major gift to the right, including the militant right, who are exuberant.”

“What they do is often wrong in principle – like blocking talks – and [the movement] is generally self-destructive,” the 88-year-old told the conservative paper.

He added: “When confrontation shifts to the arena of violence, it’s the toughest and most brutal who win – and we know who that is. That’s quite apart from the opportunity costs – the loss of the opportunity for education, organising, and serious and constructive activism.”

While many only associate the anti-fascist movement with militant direct action, it is worth noting it adopts a wide variety of tactics. This includes union organisation, migrant solidarity, public education programmes, ousting white supremacists and neo-Nazis to their neighbours and employers, and urging venues to cancel far-right events.

Chomsky has previously stated he against the shutting down of far-right meetings, arguing it is tacitly self-destructive and the emphasis needs to instead be on education.

Chomsky, who recently left his post as Institute Professor Emeritus at the Massachusetts Institute of Technology to become a laureate professor at the University of Arizona, has prompted criticism for his assessment of Antifa.

Eleanor Penny, who has written extensively on fascism and the far-right, told The Independent: “Chomsky treats the battle against fascism as a battle for moral purity than can be won when the left remain respectful, polite, and deferent.”

She added: “But fascists have no interest in winning that battle. They don’t care about respecting free speech or the right to a fair trial; they’ve openly declared their murderous intent towards people of colour (and other undesirables) and they’ll pursue that goal by any means necessary. In this context, physical resistance is a duty, an act of self-defence, not an unsightly outpost of leftist moral decline.”

“What’s more – it works. From the Battle of Cable Street in 1936 to  similar confrontations in Lewisham and Wood Green in London in 1977, physical resistance has time and again protected local populations from racist violence, and prevented a gathering caucus of fascists from making further inroads into mainstream politics.”

Critics on social media argued Chomsky, who is one of the most cited scholars in history, had become less left wing in his old age and the remarks meant he had become irrelevant.

Asa Winstanley, a journalist, said: “Sad: Chomsky comes close to Trump blaming ‘both sides’; says Antifa is ‘a major gift to the Right'”.

“Can u believe we live in a world where Mitt Romney is left of Noam Chomsky on Antifa,” said another user.

The anti-fascist movement, which is in favour of popular grassroots opposition to fascism rather than reliance on the police or the state, is not a homogenous centralised organisation. It has a long and varied history which dates back to fighting Benito Mussolini’s Blackshirts in the 1920s and then Adolf Hitler’s Brownshirts in the taverns of Munich.

In the UK, anti-fascists mobilised against Blackshirts led by Oswald Moseley, the leader of the British Union of Fascists, in Cable Street in East London in the 1930s and in many other instances.

Chomsky has previously warned against conflating the rise of fascism in Europe and the situation in America today. He has also argued that tactics need to be reassessed in the light of the current context.