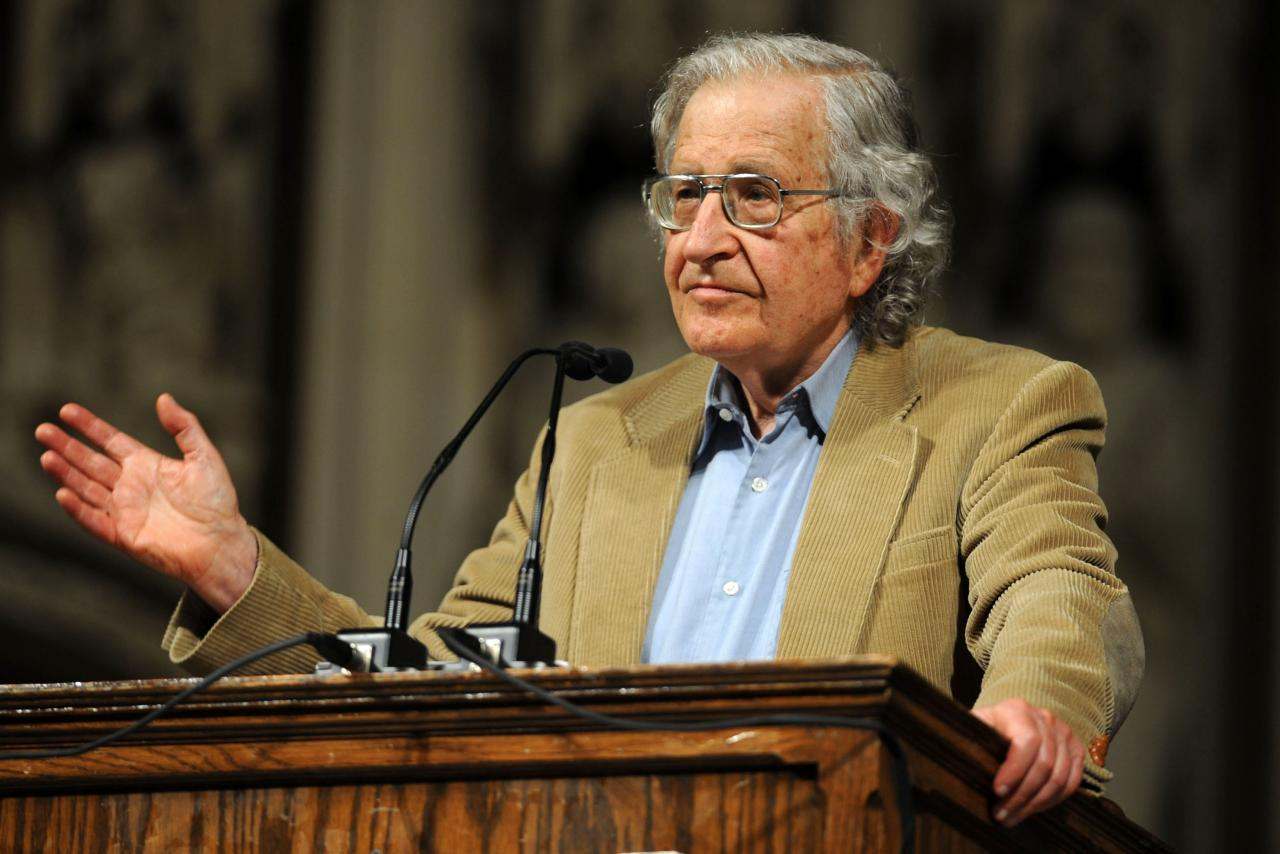 Noam Chomsky: Indigenous People Are In The Lead

MONTREAL – Noam Chomsky, the celebrated 85-year old American linguist, peace activist and social critic who is the author of more than one hundred books and the world’s most frequently quoted intellectual, was in Montréal on October 26 to help celebrate the fiftieth anniversary of the magazine Canadian Dimension.

During his visit, Chomsky delivered a lecture at the Université de Montréal in which he analyzed the decline of American power.

In the Western hemisphere, he argued, the US and Canada have become marginal to the major discussions now underway: only in the most vulnerable countries like Haiti and Honduras have US- and Canadian-supported military regimes taken power.

Chomsky also spoke out forcefully against Canadian tar sands, shale gas, and mining developments, and underlined the importance of indigenous resistance to the devastation they are causing.

According to Chomsky, “Canadian mining operations are just destroying large parts of the world.” He said that “Canada is trying to take the lead in destroying the possibility of decent survival: that’s what it means to exploit the tar sands, and the gold mining in Colombia, and coal mining, and so on…. That means destroying the world in which your grandchildren might be able to survive: that’s the Canadian idea now.”

Chomsky added that “There is resistance: in Canada it’s coming from First Nations. But it’s worth remembering that that’s a world-wide phenomenon. Throughout the world, the indigenous populations are in the lead. They are actually taking the lead in trying to protect the earth. That’s extremely significant.”

Chomsky argued that this resistance is supported by one of the most ancient documents of English law, the nearly 800-year old Magna Carta. For in addition to asserting civil rights like the presumption of innocence and the right to jury trial, the Magna Carta included a “Charter of the Forests,” which “had to do with protecting the commons”—all of the commonly shared things in nature that sustain human life—“from the depredations of power.”

Since the development of capitalism, Chomsky said, the commons have been under attack. “What Canada and the US and others are doing now,” he added, “is trying to take away what is left of the commons, includ[ing] the global environment—privatize it, take it away.”

While in Montréal, Chomsky gave an interview to Martin Lukacs of The Guardian in which he again denounced the Harper government’s policies of developing tar sands and shale gas resources.

Harper’s policies, he told Lukacs, mean “taking every drop of hydrocarbon out of the ground, whether it’s shale gas in New Brunswick or tar sands in Alberta and trying to destroy the environment as fast as possible, with barely a question raised about what the world will look like as a result.”

Chomsky praised Canada’s First Nations people for taking the lead in resisting fossil fuel developments and thereby combatting climate change. He expressed concern for the Elsipogtog people in New Brunswick, whose peaceful blockade of shale gas exploration was assaulted by the RCMP on October 17.

As Lukacs writes, he also “highlighted indigenous opposition to the Alberta tar sands, the oil deposit that is Canada’s fastest growing source of carbon emissions and is slated for massive expansion despite attracting international criticism and protest.”

In Chomsky’s own words, “It’s pretty ironic that the so-called ‘least advanced’ people are the ones taking the lead in trying to protect all of us, while the richest and most powerful among us are the ones who are trying to drive the society to destruction.”