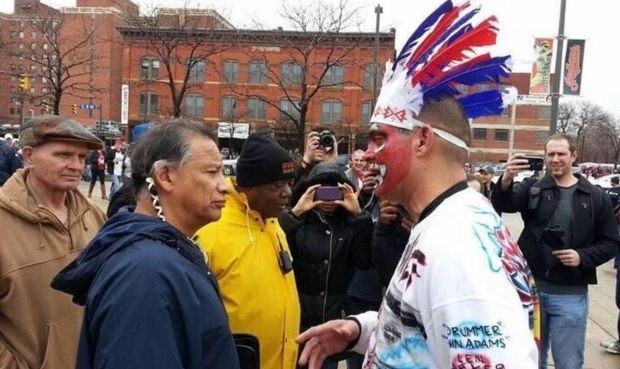 Above Photo: TWITTER/@KELLORAGS Some have posted photos showing their disdain for how Native American symbols are used by US sports

Did you know that Native Americans between the ages of 18 and 24 have higher rates of suicide than any other ethnicity in America? Or that a quarter of Native American children live in poverty? Or that Native American and Alaska Native women are, according to a government study, 2.5 times more likely to be raped or sexually assaulted than other women in the USA?

These were some of the reasons that journalist Vincent Schilling, who is Akwesasne Mohawk and editor of the Indian Country Today Media Network, created the hashtag #NoIWontJustMoveOn. It has been used in more than 15,000 tweets.

Speaking exclusively to BBC Trending, Schilling said that although many people have some awareness of historic atrocities committed against his people, there is “extensive amount of misunderstanding toward the history of Native American and First Nations people.”

He added that the residual effects of colonisation meant Native Americans have also experienced “cultural genocide”.

“There are still a plethora of adult Native people that have experienced being taken from their families by force, shipped off to Native residential schools – where they were subjected to being beaten if they spoke their native languages or became victims of sexual assault by school officials or were left to die if they contracted a myriad of diseases.”

Schilling, who was the journalist that broke the viral story of how nine Native American actors walked off the set of an Adam Sandler comedy saying that the film was “totally disrespectful” (Sandler called the incident a ‘misunderstanding‘), told Trending, “I also created (the hashtag) to show we are willing to stand together to tell the world we will heal at our own pace. We will move on, when we are ready – not at the rate that someone dictates to us.”

Many spoke of the high suicide rate among Native Indians in the US:

The topic of forced assimilation was bought up several times, notably with the sharing of a meme, made from this image from the Carlisle Indian School Digital Resource Center.

Schilling explains in an article that the ‘before and after’ composite photo of Navajo Indian Tom Torlino from his time at Carlisle Indian School, “is one of countless reasons why the Native community has embraced #NoIWontJustMoveOn.”

The image on right of Torlino was, in the 1800s, thought to indicate that “with the proper education, Carlisle students could literally blend in with white society.”