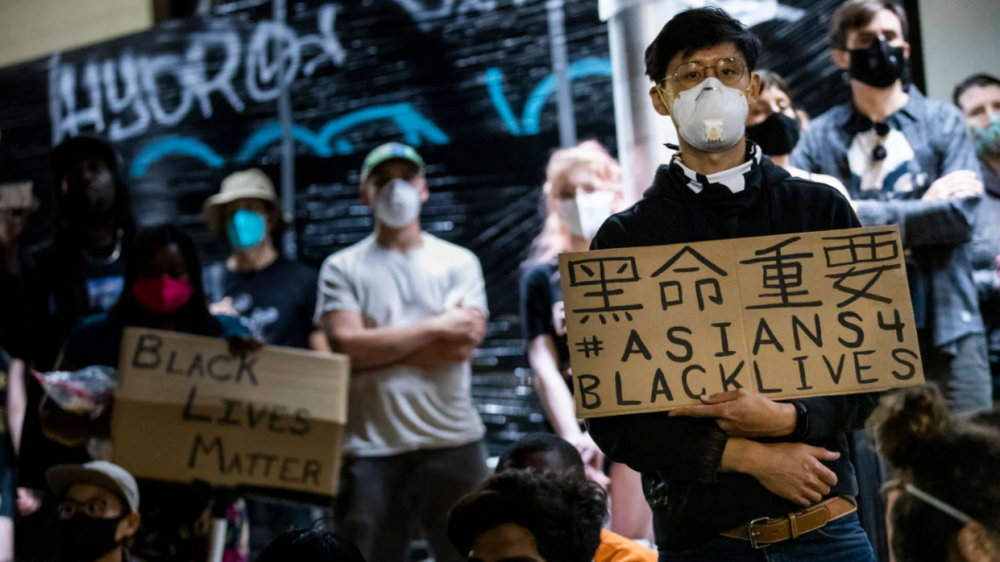 Above photo: Demonstrators hold placards during a “Sit Out the Curfew” protest against the death of George Floyd, along a street in Oakland, California, on June 3, 2020. Philip Pacheko / AFP via Getty Images.

The complicity of an Asian American officer in the murder of George Floyd is forcing Asian American communities across the country to face the ongoing ways in which we have benefited from and acted in complicity with broader systems of white supremacy.

Even though the vast majority of the police officers and vigilantes most directly responsible for killing Ahmaud Arbery, Breonna Taylor, Tony McDade, George Floyd, and the countless other Black people who have been killed have been white, we Asian Americans, and other non-Black people of color, do not get to look away or make anti-Black racism a problem that white people need to fix.

In George Floyd’s case, we have learned that an Asian American officer, Tou Thao, who is Hmong American, was one of the four Minneapolis Police Department officers involved in killing Floyd. As Floyd begged for his life, bystanders were pleading with Thao to save Floyd’s life and stop his companion, white officer Derek Chauvin, from killing him. In response to those pleas, Thao says, “He’s talking. He’s fine.” However, George Floyd was not fine.

However, not all Asian Americans reflexively came to Liang’s defense. There were Asian Americans activists and community organizations like the Committee Against Anti-Asian Violence that worked closely with Gurley’s family to demand justice. Some Asian American activists organized under the #Asians4BlackLives banner, like in California’s Bay Area, amplifying demands and participating in direct actions, while others have used this hashtag to organize among fellow Asian Americans in a more decentralized way.

In this era of Black Lives Matter that emerged in 2013, younger generations of Asian Americans have shown a growing desire to have difficult conversations among Asian American communities. This can be tremendously difficult in the face of conservative Chinese American forces, which have positioned themselves in opposition to Black anti-racist struggles, both in defense of Peter Liang and in opposition to affirmative action and other measures to desegregate public schools. Given the conflict that exists among Asian American communities in relation to Black Lives Matter, there is also a responsibility and duty to do this work internally and to challenge the ways in which Asian Americans are used as a messenger and vehicle for anti-Black racism in public discourse.

For all non-Black people of color, we must confront anti-Black racism in ourselves, our families and communities. Asian Americans must grapple with the Peter Liangs and his defenders in our communities, just as Latinx people must also grapple with the George Zimmermans in theirs. This work must be done with a deepening analysis of systemic racism. As the writer Lisa Ko tweeted, “The revolution will not be diversity and inclusion trainings.” In other words, the problems in policing will not be fixed with anti-bias training or more diversity or piecemeal reforms — reforms that will inevitably fail. The diversification of police departments simply means introducing more faces of color onto the same problem of police violence in the U.S.

Racial introspection is a starting point. Interpersonal dialogue in our homes and workplaces can help raise awareness and build understanding and critical analysis around racism in the U.S., but it is also not enough — learning and talking is not enough. Racism is bigger than individual attitudes and circumstances. We have to go further and deeper. We must identify and address the root causes of systemic racism. Therefore, we must ultimately translate this growing consciousness into demands and actions that will dismantle the systems that perpetuate so much harm, violence and death against Black people and other communities of color.

There are growing calls to take action and so many resources that have been developed, especially for white people to use their racial privilege to challenge racism anywhere and everywhere. While non-Black Asian Americans and Latinx people also bear the racial burdens of white supremacy, we too, have relational racial privilege and it is also our duty to fight anti-Black racism. We don’t have to be passive actors in this struggle.

We can join the Black Lives Matter movement by building cross-racial solidarity and intersectional mass movements. This means we connect the struggles against anti-Black criminalization to the struggles of immigrants and the movement to abolish Immigration and Customs Enforcement. This means our struggles must center the voices of intersectionally marginalized people, including Black women, immigrants, disabled people, and queer and transgender people. As legal scholar Kimberlé Crenshaw, who coined the term intersectionality, has said, “If Black lives really do matter, all Black lives have to matter. That means Black lives across gender have to be lifted up.” And as the Black Lives Matter uprising is centered this Pride month in the U.S. for LGBTQ people, we should understand, as James McMaster writes, “It’s not cancelled, it’s being celebrated the way it would be every year if we actually honored its roots: under the radar and out in the open, with black queer and trans people at its center calling the shots.”

The way we understand what steps or actions to take can be broken down into 10, 11 or 20 steps. To keep matters simple, here are three basic guiding principles:

First, we must address our relationship to Black liberation in ways that build cross-racial solidarity and support Black movements. Our actions should follow the lead of Black-led organizing, support their demands and answer their call to action, including national campaigns led by Black Lives Matter and the Movement for Black Lives, as well as local campaigns led by Reclaim the Block and Black Visions Collective. Oftentimes the call to action is as simple as showing up at a protest, contacting an elected official regarding a specific demand, and donating money to racial justice organizations, mutual aid funds, or to bail funds to protesters get out of jail.

Second, one of the most significant demands that have crystallized around the uprising against police violence is prison abolition and to defund police departments all across this country. The demand to defund policing utilizes an invest-divest framework, which, according to the Movement for Black Lives, refers to “investments in the education, health and safety of Black people” and “divestment from exploitative forces including prisons, fossil fuels, police, surveillance and exploitative corporations.” Black Lives Matter is a response to police violence and it relies on an understanding of that violence as systemic and endemic to policing and prisons. Therefore, we have to understand the killing of George Floyd as a product of systems of policing and criminalization doing what they are designed to do. In addition, when we defund policing and prisons, we also free up resources that can be utilized to uplift Black communities, which have always been subjected to disinvestment, if not extraction, of resources. These demands are critical at a time when cities and states are experiencing budget deficits as a result of the pandemic and critical services are on the chopping block — all except for policing.

Third, we must organize the communities we are a part of — our families, schools, workplaces, places of worship, and any network of people we have relationships to, with the intention of mobilizing more people into this movement. Black people have been leading and fighting for civil rights and racial justice, so it’s imperative that non-Black people share in this duty. We must join and bring more people into this movement — that is how we build solidarity and create collective change. There are organizations and other people already doing this work — find them. If we are truly committed to Black Lives Matter then we must challenge ourselves to go beyond lip service and virtue signaling. Organizing takes time, energy and commitment. We cannot make excuses for ourselves or rationalize that someone else is better suited to do this work. If you can organize a book club or dinner party, that means you can organize political education, mobilize people to protest and fundraise. There is no one way to organize, and there are many roles we can each play.

Complicity is a choice. Fortunately, we have the opportunity to make a different choice. We can choose to build cross-racial solidarity with Black liberation movements, like Asian American movement leaders Yuri Kochiyama and Grace Lee Boggs did — they understood that as Asian Americans, our collective liberation was intertwined with Black liberation. Even after this news cycle changes, we can choose to keep fighting until Black Lives Matter is no longer an aspiration, but a reality — in fact, we must.

Jason Wu is a legal services attorney in New York City, and a trustee for the Association of Legal Aid Attorneys, UAW 2325. Follow him on Twitter: @CriticalRace.