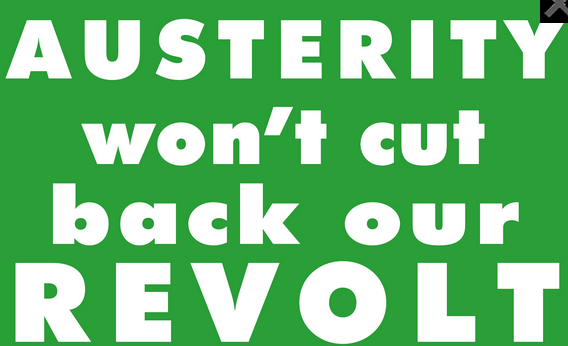 Non To Austerity In Quebec: Demonstrations Scheduled For Saturday

Spring is being welcomed in Quebec with a Popular Protest (Manifestation populaire) against austerity and the petro-economy this Saturday, March 21, called by Printemps 2015organizers. Saturday’s event in Montreal will be the biggest of the day, though others are planned around Quebec.

Printemps 2015, named in reference to the “Maple Spring” student movement of spring 2012, pegs austerity and a fossil fuel economy as the forces to rally against.

The current Quebec Liberal government, led by Philippe Couillard, is tabling an austerity-heavy budget on March 26 likely to detail deep cuts across the board to public services. The trend of government austerity is not new in Quebec, but the severity of the changes are alarming to many.

The government is also conjuring vocal dissent with its laissez-faire attitude to the environment on oil and gas developments such as fracking and the Energy East pipeline.

According to one report, Quebec’s approach to austerity is currently the third most severe in the world, ahead of all European nations. It will affect Quebec’s strong public programs related to education, health care, environmental protection, welfare, day care and culture to name a few.

This comes as a growing chorus of researchers are concluding that austerity does not work. Nobel Prize winning economist Paul Krugman, for instance, has been publishing data indicating that austerity is not sound economic policy.

In addition to austerity not having worked at macro levels for nations, such as England, austerity in Quebec disproportionately affects women, according to ‘Les mesures d’Austerite et les femmes’, a report published this month by IRIS.

Contrary to some claims, rejecting austerity does not require ignoring Quebec’s debt and deficit. For example, in February the Red Hand Coalition released their $10 Billion of Solutions document, similar to student association ASSÉ’s policy paper Who Benefits from Austerity?.

Tax specialist Brigitte Alepin, in a straight-forward technical approach, described how Quebec’s deficit could be more than eliminated by cracking down on tax avoidance. These papers aim to demonstrate that there are other options, that austerity is not inevitable.

Part of the movement’s rhetoric in Quebec, a place where political and corporate corruption are well document realities, is that the rich much also do their just part. A cartoon appearing in La Presse in January featured an angry businessman yelling “Quebecers hate the rich!” and his therapist replying, “No, they hate the inequalities.” This narrative of the middle class bearing the brunt of austerity and the rich being protected has become a strong part of the mobilization.

The schedule of events for the spring in Quebec is packed. Highlights include a National Protest (Manifestation nationale) on April 2, the Act On Climate March in Quebec City April 11, and a wide-ranging Social Strike (Grève sociale) on May 1.

This builds off active fall and winter seasons which saw, among other events, a massive Halloween demonstration in Montreal dubbed “Austerity: A Horror Story“, and at the end of February a week over 100 educational and mobilization actions throughout Quebec including banner drops, lectures, singing in bank lobbies, and occupying ministers’ offices.

At this moment in 2014, similar mobilization aspirations failed to really take off, but a wide range of organizers and citizens are setting their sights high this year. And people are coming together.

“The mobilizations have reached an unparalleled diversity. People from all walks of life responded to the various calls,” said Véronique Laflamme, a spokesperson for the Red Hand Coalition, responsible for the week of disruptive actions in late February and comprised of over 80 community groups.

Unlike the spring of 2012 in Quebec, the core of this mobilization is much broader than students and includes community groups, professors, day-care workers, parents, unions and more.

That is not to say students are uninvolved. Au contraire. As of writing, over 38,000 students are confirmed going on strike, most beginning next week, and 150,000 more are soon to vote on adopting strike mandates, according to the Printemps 2015 count.

Brice Dansereau-Olivier, a worker for community organizations and active in Printemps 2015 organizing, stressed the importance of a spring mobilization with the Liberal budget being tabled on March 26. The spring “is the right time to fight, before the law is in place,” he says. “Students don’t need accreditation from the government to go on strike,” as opposed to public-sector unions, meaning “students can push early to provide space so it feels safer for other groups to join.”

Quebec’s public-sector unions are currently in contract negotiations with the government and some may be in a position to strike legally as early as April 1. There is mobilization happening at local union levels, especially in those focused on health and education, where the cuts and legal changes  will be strongly felt.

Looking to the social strike on May 1, Dansereau-Olivier sees it as “a show of force, to shut down the economy for a day.” The idea for a large-scale demonstration was seeded a year ago by the Montreal arm of Industrial Workers of the World (IWW) and 12 Ways to Strike on May 1 2015 was posted on their website recently.

But, says Dansereau-Olivier, “once the idea was planted, people have been organizing locally with no one group leading. It is a decentralized and autonomous mobilization”. This comes with risks but also excitement as it presents an unprecedented moment of protest “across the province and across sectors”.

Organizers in the rest of Canada are hoping the movement in Quebec can inspire action in their English-speaking communities. And it may be starting.

The topic of education funding has led to university staff strikes in Toronto, and calls for free post-secondary education can be heard from students in Saskatoon and the President of Cape Breton University.

New initiatives are trying to ride the energetic wave of Quebec’s Printemps 2015, for example seen with the pan-Canadian Revolutionary Student Movement planning protests on Monday, March 24, in over a dozen Canadian cities, and with the Smart Change campaign attempting to bring austerity into focus as a political issue in Canada.

Issues around veterans, services for women, environmental protection, prisons, Indigenous treaty rights, health care, Statistics Canada, Canada Post, food safety and a widening wealth divide where the poorest 50 per cent of the population control six per cent of the wealth could all serve as starting points for austerity-related campaigns.

But, as Dru Oja Jay, an architect of Smart Change, put it, “Harper’s approach of introducing small, highly leveraged cuts and attacks one by one has largely been successful at keeping the word austerity out of public discourse. It has also kept movements divided and despairing instead of making the connections and building momentum.”

Moving forward with Printemps 2015 organizing, Dansereau-Olivier, speaking in Montreal, was enthusiastic about “shows of solidarity” from outside Quebec to help break the isolation that is sometimes felt organizing in one place. He has been inspired by the “many student movements around the world in recent years.”

Asked about the scope of the overall struggle, of defeating austerity and getting off fossil fuels at a global scale, he replied, “It’s going to be a long-haul fight.”