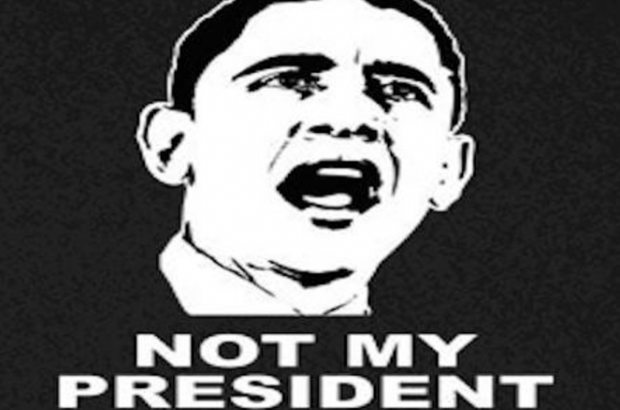 None Of Them Has Ever Been My President

Tens of thousands have demonstrated against the election of Donald Trump. Some are activists, continuing the struggle. Others are Democrats that are just “mad.” “The Black movement against police terror didn’t need a Donald Trump waiting in the vestibule of the White House to get “mad.” For those who fear Trump’s “fascism,” the threat level “depends on how he uses the arsenal of repressive tools bequeathed to him by the Obama administration.”

“You can’t scare people with a specter if they have already been in combat with the real thing.”

As a revolutionary Black nationalist whose socialism predates my facial hairs, I have no problem saying Donald Trump is not my president. Neither is the current occupant of the White House, nor were any of the Democrats, Republicans and Whigs that preceded him.

On a chilly November day in 2009 a newly-created coalition, of which I was a co-founder, marched on the White House to denounce and renounce Barack Obama as a tool of white supremacy and the imperial war machine.  “Obama, Obama, you can’t hide – We charge you with genocide,” we shouted, indicting the First Black President for the crimes he was busily committing in service to his masters on Wall Street. The Black is Back Coalition for Social Justice, Peace and Reparations had been formed less than two months before, largely to demonstrate that not all Black people were bamboozled by the slick corporate politician from Chicago, elected one year earlier in the nation’s first billion dollar presidential campaign. As the Coalition’s founding press release stated:

“Black and Brown people continue to suffer the brunt of un/under-employment and predatory loan scandal crises. Military spending under Obama has increased as have the warfare this nation continues to export to Iraq, Afghanistan, Pakistan, Venezuela and Colombia. Mass incarceration, police brutality and political imprisonment remain rampant…”

The Black is Back Coalition warned of the “traps set by Obama’s so-called ‘post-racial’ politics that perpetuates the same oppressive militarist agenda well known during the Bush regime.”

To paraphrase Fidel Castro, history has vindicated us.

“Obama joined George Bush and Bill Clinton in perpetuating the 20 year-long slaughter in the Democratic Republic of Congo that has claimed more than six million lives.”

Obama mobilized NATO air forces and jihadist proxies to destroy Libya, which had previously enjoyed the highest living standard in Africa. He redeployed these same al Qaida terrorists to Syria, killing 400,000 people, displacing half the surviving population and bringing the U.S. to the very brink of nuclear war with Russia. This so-called “Son of Africa” has effectively occupied most of the continent through a U.S. Military Command (AFRICOM) that was less than a year old when Obama was sworn into office. The African Union provides diplomatic cover for the CIA-run “peace keeping” mission in Somalia, while U.S. conventional forces have infiltrated the militaries of all but two African nations. The holdouts, Eritrea and Zimbabwe, are under constant threat of regime change. Obama joined George Bush and Bill Clinton in perpetuating the 20 year-long slaughter in the Democratic Republic of Congo that has claimed more than six million lives, the worst genocide since World War Two (“Obama, Obama, you can’t hide, We charge you with genocide!”)

With the eager assistance of Secretary of State Hillary Clinton, Obama baldly abetted a Nazi-spearheaded coup against the elected government in Ukraine — and then blamed Moscow when Russian-speaking Ukrainians resisted, provoking a “New Cold War” that could turn hot in an instant. At the same time, Obama “pivoted” to militarily confront China, whose economy is already, by some measures, larger than the U.S. The jihadist war in Syria should also be seen as a theater of imperialism’s last ditch offensive to encircle “Eurasia” in hopes of preserving U.S.-based multinational corporate domination of a “rigged” system of dollar-based world trade.

Just as the Black is Back Coalition warned, Barack Obama was the Black face of imperialism — a change of color without a difference. He tried to hand off the controls to Hillary Clinton, who got six million votes less than he did, and lost.

Back in 2007, when Obama and Clinton were pretending to be ideological opponents — as cookie-cutter corporate Democrats often do — we at Black Agenda Report wrote that “There’s not a dime’s worth of difference” between the two. Every decent, peace-loving person on Earth should be glad to be rid of both of them. Humanity would probably not survive another year of either one.

“Barack Obama was the Black face of imperialism — a change of color without a difference.”

Donald Trump is also a danger to humanity, like every other U.S. chief executive since Truman nuked Hiroshima and Nagasaki. If words mean anything, Trump starts off posing less of a doomsday international menace, since he claims to want to establish talking, rather than shouting, threatening, nuke-rattling relations with Russia and China, while Clinton’s version of “reset” was an armed confrontation with Russia over the skies of Syria. Of course, all that could quickly change. Trump may be a “party of one” among Republicans in Congress and even in his own cabinet.

For those who fear Trump’s “fascism,” the threat level depends on how he uses the arsenal of repressive tools bequeathed to him by the Obama administration. These legal, infrastructural and technological instruments of the national security state are fascist in their intent; they were made for the purpose of tracking, disorganizing, neutralizing and locking up dissidents, and disinforming the public at large. Thus, President Obama and his predecessors were fascist-minded, whether you call their administrations operatively fascist or not. The Obama administration would not have pushed a bill through Congress allowing the U.S. military to detain American citizens without trial or charge if he had not anticipating using it. He would not have feverishly upgraded an omnipresent national and global surveillance apparatus if he did not anticipate putting it to the task of martial rule. Fascist-minded is all that can be said of Trump, at this point, as well.

Black Lives Matter activists have been under FBI surveillance since day one. Ever since Ferguson, the federal government has taken the lead in over-charging “rioters” in rebellious cities. New York City cops have used social media surveillance as the basis for conspiracy charges against groups of more than 100 young Black people in separate sweeps in Manhattan and The Bronx. The “fascism” that correctly described Jim Crow rule in the pre-Civil Rights South lives on at the core of the mass Black incarceration regime put in place with the crushing of the Black Liberation Movement, two generations ago. The current movement against police terror, which ultimately demands Black community control of the police, put activists in direct confrontation with the coercive arm of the State. There is no retreat from this response to the demands of Black people “on the street,” who bear the daily brunt of repression and are also among the most effective organizers.

“Obama would not have feverishly upgraded an omnipresent national and global surveillance apparatus if he did not anticipate putting it to the task of martial rule.”

The Black movement against police terror didn’t need a Donald Trump waiting in the vestibule of the White House to get “mad.” The movement has already crossed the Rubicon of confrontation with the State. The moment occurred in the second term of the First Black President, when a new generation learned that liberation cannot be vicariously experienced. The 21st century Black movement emerged with the knowledge that Black corporate Democrats are not their allies, nor are Black police chiefs, or Black preachers whose real loyalties are to the Democratic Party and its Wall Street patrons.

If the Black movement were afraid of the likes of Donald Trump, it never would have gone up against the militarized police that occupy Black communities. You can’t scare people with a specter if they have already been in combat with the real thing.

To the extent that electoral activity is useful to the movement, it should be employed with special vigilance close at hand, against misleaders like the 32 members of the Congressional Black Caucus who failed to support the Grayson Amendment that would have halted Pentagon transfers of weapons and equipment to local police departments. These “Treasonous 32”, comprising 80 percent of full-voting Black Democrats in the House, cast their shameful votes in June, 2014, just two months before Michael Brown was shot down in Ferguson, Missouri. (Rep. William “Lacy” Clay, representing Michael Brown’s district, was among the 32.) If the movement is to have any special targets for electoral vengeance, it is these homegrown enemies, who turn Black people’s votes against themselves.

Trump or no Trump, the Black movement must continue to press and refine its demands — or Power will concede nothing. On November 6, after their annual march on the White House, the organizations of the Black is Back Coalition ratified a 19-point document that puts self-determination at the heart of the broadest range of issues confronting Black America: “Every central demand, every strategy of struggle, must be formulated with the goal of self-determination in mind. Otherwise, the movement will allow itself to be drowned in reformist schemes and projects that bind Black people even more tightly to structures of outside control.” The points range from “Black Community Control of Police,” to “Halting Gentrification,” to “Nationalization of the Banks.”

The points were compiled during Barack Obama’s time in the White House, and they will remain relevant under a President Donald Trump.

We’ve been mad. Let’s get organized, and get free.