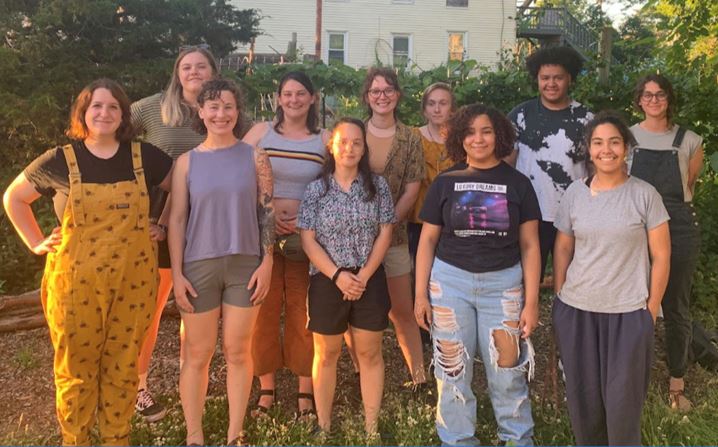 Above Photo: Non-profit employees, such as these workers at Capital Roots, are increasingly looking for union representation. Makayla Wahaus / Cody Bloomfield.

Makayla Wahaus and her co-workers are part of a trend in the union movement.

Employees at nonprofits including human service agencies, museums, think tanks and other such organizations are starting to look to traditional labor unions as a way of improving their finances and, they say, democratizing their workplaces.

Makayla Wahaus’ journey to union activism started at Rensselaear Polytechnic Institute where she was a physics major. A course on food systems sparked an interest in social problems like food deserts and poor nutrition and the 2020 graduate ended up working for the non-profit Capital Roots, which works to make fresh produce available to people in neighborhoods where there are no nearby supermarkets or other healthy food sources.

She says she loves her job, but wants more say in how the organization is run, and like others, says it’s increasingly  hard to survive on the pay, which for many is under $15-an-hour.

“Those are all factors that came together and made us want to organize collectively,” she said of the current drive to have Capital Roots employees join the Service Employees International (SEIU) union.

She and her co-workers are part of a trend in the union movement in which employees at nonprofits including human service agencies, museums, think tanks and other such organizations are starting to look to traditional labor unions as a way of improving their finances and, they say, democratizing their workplaces.

In the Capital Region, Capital Roots is one of at least three nonprofits whose employees have moved to unionize in recent months.

Earlier this year, workers at the Northeast Parent and Child Society voted to join the Civil Service Employees Association (CSEA). In addition to Capital Roots, employees at the Joseph’s House homeless shelter  are moving to join SEIU.Nationally, union membership remains low among the broad workforce at just above 10 percent, compared to 20 percent 40 years ago, according to the federal Bureau of Labor Statistics.

That reflects years of decline that came with de-industrialization in much of the nation’s rust belt, deregulation and the trend toward replacing those on the picket line, which started when President Ronald Reagan fired 11,345 striking air traffic controllers in 1981.

But in the last few years there has been at least a small sign of resurgence in union activity, evidenced by union drives at post-industrial employers such as the Starbucks coffee shop chain and the Amazon web retailer.

At the same time, nonprofit groups have also seen a resurgence.

Federal statistics track union membership by occupation, not whether an organization is for-profit or nonprofit, so precise numbers are hard to come by.

Additionally, union officials who are organizing union drives are often reluctant to publicize them until they gain enough momentum to increase their chances of success.

But those who track such things say they’ve noticed an uptick in unionization in the nonprofit sector in recent months and years.“What we’ve been seeing in the trends is that, yes, there has been an increase in the nonprofits organizing,” said Cathy Creighton, Director of Cornell University ILR (Industrial and Labor Relations) Buffalo Co-Lab and a labor attorney.

There is even a Nonprofit Professional Employees Union that has organized unions in a number of organizations nationally.

According to their website, they have unionized a number of think tanks including the Center for American Progress, New America United, both public policy think tanks, and Bend the Arc, a Jewish progressive organization.

Other groups represented by the union include the Brookings Institution, ACLU, Center for American Progress, National Immigration Law Center, National Center for Transgender Equality, Food and Water Watch and the Center on Budget and Policy Priorities.

Museums like the Chicago art institute, The Lower East Side Tenement Museum in New York City as well as the  New York City Planned Parenthood have unionized too, noted Todd Vachon, an assistant professor of  labor studies and employment relations at Rutgers University.

Actually, it’s surprising that many nonprofits haven’t organized sooner, given the type of employees they attract.

Social action or human services careers frequently draw, young, highly educated and idealistic people who are looking for a job that has some greater meaning.

“The people that get into this are really passionate about the work that they do,” said Vachon.

One turning point may have been the pandemic, which not only caused temporary shutdowns but also prompted people to rethink relationships with their employers.

Workers in some social service groups were unhappy with how health and safety protocols were enacted during the pandemic. That’s especially important for human services agencies whose employees deal face-to-face with clients who may be homeless or facing personal issues that endanger their health.

“When COVID set in, a lot of folks didn’t have a union and were not pleased with the way management handled health and safety in the workplace,” Vachon noted.

“These are everyday workers who went in and during the pandemic placed health challenges on themselves,” added Ron Briggs, Capital Region president at CSEA. “They are starting to see that if they form something together they are going to be stronger.”

“The pandemic was a disrupter,” explained Creighton.

The money, of course, is also an issue and the current inflation is hitting non-profit workers both in their pocketbooks and workloads.

“Like my co-workers, I love what I do, but I find the workload and pay unsustainable,” said Cody Bloomfield, another Capital Roots employee involved in the organizing effort.

Inflation may be creating a feedback loop for human services organizations as well.

With higher food and housing costs, more and more families will need help from groups like Capital Roots or Joseph’s House. That, in turn, increases the workload on the employees.

As families are in more and more need for economic reasons these services become more and more essential,” said Briggs. At the same time, people who work in these organizations may be struggling to afford healthy food and housing as well.

Observers have said they don’t push back as hard as managers at private for-profit firms for a number of reasons.

They may be under fiscal stress but not pressure for ever-increasing profits, which is what many publicly traded companies demand of their managers in order to satisfy shareholders.

“We read your list of concerns and recognize several Board priorities in them, reflecting on the fact that we have not been able to make as much progress on some of them as we would like to,” Capital Roots Board of Directors President Rachel Hye Youn Rupright wrote in a letter last week to workers about their seeking a union.

“Concerns such as staff turnover, salaries, and COVID fatigue are front of mind and have been discussed by the Board, as recently as at our annual Board retreat held last week.”

Union officials say that conciliatory tone is in contrast to how some private for-profit firms can react when facing unionization efforts.

The letter, said SEIU organizer Sean Collins was “Not a ‘yes’ but also not a ‘no’ either.”