Above photo: The Air Force awarded the contract for the long range strike-bomber to Northrop Grumman. AP File Photo/Wong Maye-E.

“Now look, your grace,” said Sancho, “what you see over there aren’t giants, but windmills, and what seems to be arms are just their sails, that go around in the wind and turn the millstone.”

Under the aegis of Baltimore Peace Action, twelve stalwarts left Baltimore on September 3 to take on weapons contractor Northrop Grumman.  If Sancho Panza were with us, he would have described our journey to Linthicum Heights, Maryland as foolish and nonsensical.  How dare this group to think it could joust with a giant weapons contractor which has great influence in Congress, in the Pentagon and even in the White House?  Nevertheless, armed with signs, a Veterans for Peace flag, chunks of watermelon, Pellegrino water and a letter to CEO Jackie Warden, we arrived at a corporate office.  Our signs carried messages which were in the letter:  Say No to Northrop Grumman, Northrop Grumman Profits from War, Stop Buying Legislators and Close the Revolving Door.

Northrop Grumman has the power and the wealth, but our ever-present concern for democracy brought us out on the beginning of the Labor Day weekend. Like other weapons contractors, Northrop Grumman thumbs its corporate nose at democracy.  It buys members of Congress.  Does a legislator listen to a constituent who urges him/her to cut the Pentagon budget or does it obey its campaign contributor?  Why does the military get close to 60% of the discretionary budget? Because these corporations spend millions of dollars on lobbyists who even write the legislation.  And there is the revolving door between weapons contractors and members of Congress and the Pentagon. Our current Secretary of War Lloyd Austin was on the board of Raytheon.  Why do we see former generals on television informing us that we are threatened by Iran and Venezuela?  They are selling weapons.  What purpose would it serve if a peace activist appeared on CNN saying War Is not the Answer? Peace doesn’t sell weapons.

At the corporate office, we lined up with our signs in front of the building, while Dick Ochs livestreamed our protest.  When two security guards showed up, Janice Sevre-Duszynska and I made a dash to get inside the building in order to deliver the letter.  While we made it through the first door, the guards soon intercepted us.  After some dialogue, they promised to take a copy of the letter to the proper authority.  They also informed the group that we were on private property, and must leave. 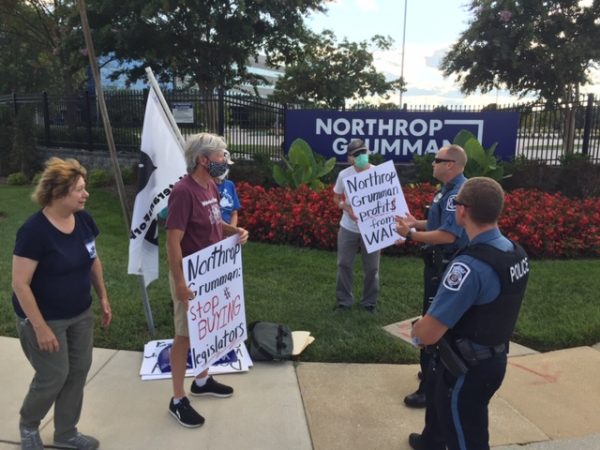 Ellen Barfield carrying the VFP flag indicated that Ms. Warden’s company is getting corporate welfare from the government. So this property is actually owned by the people.  Her oratory, which she would later share as well with the Anne Arundel County police officers, failed to convince the security crew.  They graciously recommended that we move to the road to continue our protest. So eventually we gathered in front of a Northrop Grumman sign on Route 170.  Soon after, the Anne Arundel County police team appeared to ensure us of our First Amendment right to be there. They also went over to the other side of the highway to speak with our colleagues

The officers were inquisitive as to why we were challenging Northrop Grumman.  We provided them with copies of the letter, which they read.  Several of us took the opportunity to explain the need to protect our democracy from weapons contractors and why the military budget should be slashed making funds available to deal with the pandemic, climate chaos and other grave needs.

The only victors in the 20-year war in Afghanistan were the weapons contractors. All of the media focus on the US pull-out from Afghanistan impelled us to write to Ms. Warden to seek a meeting with a representative of her company. John Lennon told us to imagine.  Imagine that Ms. Warden meets with a few of us and engages in a  dialogue about strengthening our democracy, about developing humanitarian products and renouncing weapons contracts, and agrees to promote a federal discretionary budget where a majority of the tax dollars go towards health care, education, the environment, including the Green New Deal, and infrastructure.  The ghost of Sancho Panza, though, shows up and informs that a meeting with the CEO will not happen. If nothing else, Sancho was a realist who would have reminded us we accomplished nothing by protesting.  The wars must go on.

Prior to our visit to Northrop Grumman, on September 1 the House Armed Services Committee endorsed a Republican plan to add $24 billion more than President Joe Biden requested for the military. Maryland Peace Action set as its goal for 2021 to work on decreasing the military budget.  We were unsuccessful.

I cannot speak for the group who protested at Northrop Grumman.  However, I suspect each one felt a need to do something.  Maybe crying out in the wilderness is therapeutic.

Also forty-three concerned citizens signed the letter to CEO Cathy Warden.  Two of the signers were involved in draft board raids in the 1960s, three spent time in prison for engaging in Plowshares disarmament actions, at least four are veterans and most of the signatories have engaged in repeated acts of nonviolent resistance to war.  We live in an empire in which our legislators are captive of the weapons contractors.  At this time, as we confront a pandemic  and maddening climate chaos, we must reach back and engage in acts of resistance. There is always a war to protest.

Max Obuszewski is well known for his jousting with windmills.

Below are the concerned citizens who signed the letter to Ms. Warden.  The letter was also emailed to the N G CEO.

Joy First, Wisconsin Coalition to Ground the Drones and End the Wars

Bruce Gagnon, Coordinator of the Global Network Against Weapons & Nuclear Power in Space