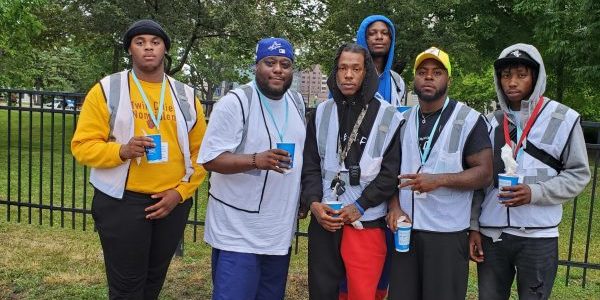 Nonviolent Security And Cop-Free Schools Are Not A Utopian Dream

Emerge and Twin Cities Nonviolent show us how to use nonviolent security to create safer, more hospitable schools.

At a school in North Minneapolis, the school day starts with a team of four peacekeepers escorting teachers and staff into the building. Then the team watches out for the students as they get off the bus and enter the schoolyard. Throughout the day, they’re on hand to de-escalate fights and aid the students in conflict resolution. They’re not volunteers. This is their job. They have replaced police (resource officers) in this school.

This is not a fairy tale or a utopia story. Two blocks away is a hub of drug dealing. Gun violence is frequent in this neighborhood. These four peacekeepers are part of EMERGE, a program which provides internships, jobs and mentorship for youth who live amidst a cycle of violence, trauma, gangs and/or the justice system. Over several decades, EMERGE has helped hundreds of youth like them. These four peacekeepers, and six more youth, have gone through a year-long training with Nonviolent Peaceforce, organized with support from Twin Cities Nonviolent.

At the school, the students do not have to walk past armed cops to get to class. Instead, they interact with the unarmed peacekeepers who understand what they’re experiencing and going through.

Twin Cities Nonviolent is part of our Nonviolent Cities Project. In dozens of cities and towns, people are sharing skills, knowledge, solutions and strategies for dismantling the systems of violence and implementing nonviolent alternatives. EMERGE director Will Wallace says working with Rev. Harry Bury, the coordinator of Twin Cities Nonviolent, “opened a lot of doors” and made things like replacing cops in the classroom possible.

Rev. Bury is a lifelong peace activist. Ninety years old and seemingly indefatigable, he was invited to speak with the Brothers (as the EMERGE participants are known) about nonviolence. Instead of preaching, he asked them about their lives, dreams and goals. Toward the end of the conversation, he mentioned that he needed their help. Rev. Bury wanted to participate in the Campaign Nonviolence Action Week. Thousands of people in all 50 states and dozens of countries would take action for peace and a culture of active nonviolence, free from war, poverty, racism and environmental destruction.

Could the Brothers keep their block violence-free for 10 days in September?

The answer was yes.

The approach of training and hiring these young people to deal with conflicts in their community is a powerful one. It “releases two doves with one hand” (the nonviolent alternative to killing birds with stones). It provides jobs with dignity for the youth. It draws upon their knowledge of their community. It empowers them as “credible messengers” to help neighbors resolve their disputes without violence. At the school, the students do not have to walk past armed cops to get to class. Instead, they interact with the unarmed peacekeepers who understand what they’re experiencing and going through.

We want to see every school providing nonviolent security.

From neighborhood safety and violence reduction to school security, the Brothers have been making the bold vision of a culture of active nonviolence real. Recently, the Brothers even participated in providing nonviolent security at the local Somali Independence Festival, joining Nonviolent Peaceforce in replacing police at the event. Everything went fine. As it should.

Their example shows us that a culture of active nonviolence is already happening. We can learn from them. And we can support them. Rev. Bury and Will Wallace say the only thing holding them back from bringing peacekeepers to more schools is more support and funding. They have six more youth fully trained and ready to help out. As we take action for a culture of nonviolence, supporting these efforts is critically important. Here is where you can help out. (When you donate, make a note that your donation should go to the N4 program.)

Peace team work (another word for nonviolent security) is a core pillar of our vision of a culture of nonviolence. We want to see every school providing nonviolent security as the Brothers are doing. We want each Nonviolent City to have a local peace team and regular trainings in violence de-escalation. If this excites you, get in touch with us. Pace e Bene/Campaign Nonviolence collaborates with peace teams across the country. We can connect you to a group, training, or more information about how you could do this in your community. Every Nonviolent City and Campaign Nonviolence group can help grow the culture of active nonviolence by supporting these efforts. Contact us here and sign-up for a skills training here.