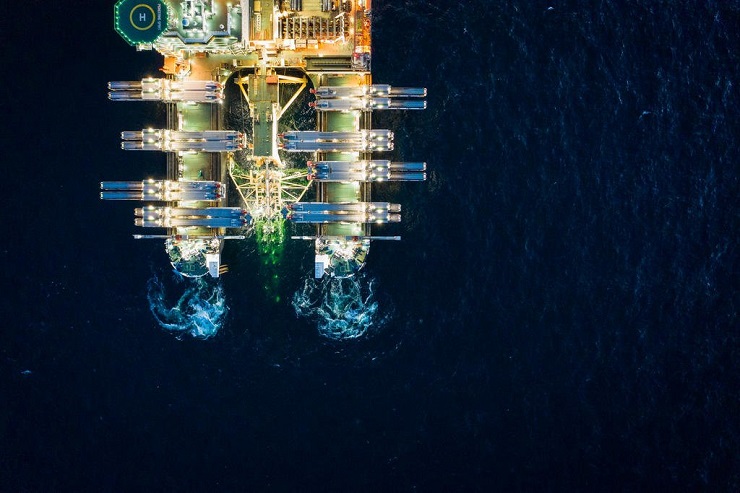 Above Photo: From Journal-neo.org

Does Mr. Trump really not grasp that his sanctions left and right – and now on the Russian-German gas pipeline Nord Stream 2 – is committing economic suicide, not for himself, of course, but for the United States? He attempts to punish not only Russia, but all the corporations, construction companies, Russian, German and from everywhere, which collaborated and are still working on the final stretch of the1,250 km pipeline.

Nord Stream 2 is an under-water pipeline crossing from Kingisepp in Russia to Greifswald in Germany, under the Baltic sea. Its cost is estimated at more than US$ 100 billion. It parallels Nord stream 1 (see map), and is supposed to make Germany energy secure, especially once Germany exits from nuclear energy. After the March 2011 Fukushima nuclear disaster, Germany has already permanently shut down eight of its 17 reactors and pledged to close the rest by the end of 2022.

Russia will supply Germany with 55 billion cubic meters (m3) of liquified natural gas (LNG), via Nord Stream 2, roughly the same amount as is already delivered through Nord Stream 1, two pipelines of about 1,250 km running in parallel on the floor of the Baltic Sea. Nord Stream 2 is scheduled to begin operating in mid-2020.

The pipeline is to 90% completed and will not be stopped, come hell or high water. If worse comes to worst, and European companies do quit over the threat of sanctions, Mr. Peskov, the Russian Presidential spokesperson, says Russia can finish the job with her own ships and construction capacity.

President Trump knows it. So why dishing out sanctions? Hoping that one or the other of the “collaborators” will jump ship – and rather work for US fracking giants than for environmentally friendlier Russian gas? There is certainly a risk of that happening. But how likely is that?

Well, likelier than a common-sense reader may believe. The project’s important part of pipeline-laying work is being carried out by the Swiss-Dutch company Allseas, which would be directly affected by the sanctions. As a consequence, Allseas has suspended its work last Saturday, 21 December; they say “pending clarifications on legal, technical and environmental questions with the US.” Other participating companies are Russia’s Gazprom and European OMV, Wintershall Dea, Engie, Uniper and Shell. So far, they have not reacted to the threat of sanctions.

On December 17, the Senate passed a Sanctions Bill, to punish any company, German or otherwise which contributes to the construction of the Nord Stream 2 pipeline. Don’t question the legality and the right of the US of interfering with a business / trade transaction between two sovereign countries. It is outrageous. Even more outrageous, though, is that the world at large the more than 190 UN members are (almost) silent. Many of them are also victims of US sanctions. But most don’t even “sanction” back, peacefully, understood, but as a reply to Washington’s breaking international laws with impunity.

The US bill will enter into effect only 30 days after it is signed which means that work on the pipeline may well be finished when the sanctions will become effective. However, as we know, with the US no rule is viable and trustworthy, sanctions may be applied retroactively.

For once, Ms. Merkel seems to stand firm. She says “US sanctions won’t stop the Nord Stream 2 project”, and so says President Putin. Russian Foreign Minister Sergei Lavrov, slammed the US by saying that “US diplomacy is limited to intimidation, by imposing sanctions, ultimatums and threats.” To that, Heiko Maas, German Foreign Minister added “European energy policy is decided in Europe, not in the US.”

The German- Russian Chamber of Commerce expressed yet the strongest position, stating that this project serves Germany’s economic interest and energy security and calling for retaliatory sanctions on the United States. Yes, retaliatory sanctions! But will the Europeans have the guts to do so? – And do so with meaningful sanctions, like tariffs on American goods, or stop importing certain US goods, cars or iPhones, for example.

The US not only wants to sell her own fracking gas – which in addition of violating Germany’s environmental rules – is also much more expensive than Russian LNG. Equally or more important – Washington wants to drive yet another wedge between Germany and Russia. This will not work.

Germany, especially Germany’s business community, has recognized that Russia, the huge landmass of Eurasia all the way to China, is a natural market not only for Germany, but for the whole of Europe – and has been for hundreds of years, before the UK transplanted her empire across the Atlantic, killing millions of indigenous people conquering North America, hoping to have an easier time to reign over the world from her vantage position between two shining seas.

It has almost worked. At least for a while. But now US arrogance, greed and violence around the globe is backfiring. The world is becoming sick and tired of the US exceptionalism. The relatively recent indiscriminate and unlimited sanctions program against anyone, any nation, that doesn’t bend to the whims of Washington, results in economic warfare. It is driving more allies away than it attracts. So, it amounts to America’s economic suicide.

Since the US economy depends on financial hegemony and war – it will be a gradual downfall of the US economy. It may not be a sudden collapse as many may wish, but rather a slow but steady disappearance of the US muscle, exactly the way it ought to be, so as not to hurt countries still depending on the US dollar, giving them time and opportunities to diversify their markets and monetary reserves.

What may the US holy sanctions for Nord Stream 2 imply? – According to preliminary hints from the State Department they may include individuals involved in the project having their US visas revoked and property blocked. US visa revoked? So what, but property “blocked” – means not just property in the US but around the globe, meaning that property is effectively confiscated, stolen, by US authorities, as we have seen in the case of Venezuela which has lost some 130 billion dollars through outright US asset confiscations – theft – since the beginning of 2017.

All this is possible only because the west is still dominated by a fiat US-dollar run economy that has the capacity to interfere in any western US-dollar based economy. In that sense, US sanctions have a positive long-term effect. They drive foes and allies alike away from the bogus US-dollar economy, towards strong eastern-run, and solid output-based economies, with gold backed currencies, like the Chinese Yuan and the Russian Ruble.

It is puzzling and mind-boggling – that Trump, and the entire financial oligarchs that pull the strings behind Trump, do not see this medium to long-term effect. Do they really believe in their untouchable “exceptionalism” and hope with their superb arrogance, that the world will continue to fall for sanctions, if they see and realize they can live an eastern alternative? – Or, do they know they are doomed, but while going down, they lash around like a dying beast to bring as many countries as possible down with them?

The exceptional nation US of A displays always the same logic, either you are with us or against us. As could have been expected, Poland along with the Baltic states are anti-Russia and anti-EU, and therefore pro-US. Brussels announced an agreement between the US and these states selling them 112 billion m3 of fracking LNG starting in 2020. The US calls it “freedom gas”. Sounds like “freedom fries’’ instead of French fries, when the French were in a clinch with Washington in 2003 over objecting to the US unilateral invasion of Iraq. – Remember? Same-same. As if people wouldn’t know by now what “freedom made in USA” means.

Maybe the rest of Europe realizes that they owe some loyalty to Russia, as the Russians, the Soviet Union at the time, was the deciding factor in winning WWII against Hitler’s Germany, not the US and her western allies.

One of Washington’s argument for fighting Nord Steam 2 says that the US does not want to save Ukraine from possible bankruptcy if Kiev loses the $2-3 billion it makes annually from Russian gas transit to Europe. It implies that the new pipeline, by circumventing Ukraine, would deprive Ukraine from the lucrative transit fees. This argument has just become mute, as Russia, after years of legal battles and negotiations has signed a historic agreement with Kiev on an extension to the current gas transit agreement, which expires on December 31, 2019. The agreement will restore the transit fees of US$ 2 – 3 billion per year. In addition, Mr. Putin confirms that Russia is ready to give Ukraine a 25% special discount on its natural gas for domestic consumption. Quite a concession by Mr. Putin towards a country that has in a most ugly way turned its back to Russia, of which it was an integral part for centuries. A laudable Russian move towards peace.

In all, still more than 50% of all Russian gas to Europe will continue to be flowing through Ukraine, this is more than 110 billion m3 /year. Both, Russia and Germany have always maintained that Nord Stream 2 was meant as a supplementary route to guarantee stable supplies to Europe, but will not replace transit through Ukrainian territory.

Will this just agreed deal between Russia, Ukraine and the European Commission have an impact on the US sanctions? – Most likely not, because what Russia wants even more than the European market is separating Europe from Russia, and in a wider sense, from Eurasia, including China – a lost cause, of course.

A crucial question is, why does Germany or the EU for that matter not threaten Washington with return sanctions? – Afraid of what? – Is it NATO that runs the EU that will not allow such measures, or else? NATO countries are already divided among themselves – with Germany or the EU imposing sanctions against the US – and over and above NATO’s objections, it might amount to a break-up of NATO. And Europe is not quite ready for this step – yet.

The bottom line is – are the US serious with trying to stop Nord Stream 2 with sanctions, or are they just testing the waters with economic bullying, finding our ‘who is with us and who is against us’ – and where is the limit to unabashed bullying – a lesson Washington then may apply for developing their strategy (sic) of how to subdue Europe in their competitive fight West against East – again, it is a losing proposition, as Washington and Trump’s puppeteers must know. It’s just postponing the downfall into America’s dark doom.