North And South Korea Continue To Move Toward Peace And Integration, Despite US

North and South Korea held high-level talks at Panmunjom on October 15 and adopted a joint statement on implementing the Pyongyang Joint Declaration signed at the inter-Korean summit on September 19, 2018.

They discussed a timetable for the inter-Korean road and railway project and agreed to break ground to connect the North and South Korean roads and railways in “late November or early December.” The accelerated timetable may reflect both sides’ desire to break ground prior to North Korean leader Kim Jong Un’s expected return to Seoul before the year’s end. Before the groundbreaking, the two sides agreed to conduct joint surveys of the northern stretch of the Gyeongui line “in late October” and the East Sea line “in early November.” Crossing the demilitarized zone (DMZ) will require prior consultation with the US-led UN Command, which has, in the past, refused permission.

The two sides also agreed to meet soon to discuss the details of a concert by the North Korean Samjiyon Orchestra in South Korea scheduled this month. In addition, they agreed to hold the following meetings to implement the Pyongyang Declaration:

Officials from North and South Korea and the United Nations began talks on Tuesday to turn a border village into an unarmed neutral enclave where military guards and tourists from both sides would move freely across the demarcation line.

The village of Panmunjom, also known as the Joint Security Area, lies inside the Demilitarized Zone, a buffer zone one and a half miles wide that has divided the Korean Peninsula since the Korean War was halted in a truce in 1953. Panmunjom was originally created as a neutral area. But since North Korean soldiers wielding axes killed two American Army officers there in 1976, it has been divided by a demarcation line like the rest of the DMZ, with armed guards from both sides engaged in a tense, daily standoff.

When President Moon Jae-in of South Korea and North Korea’s leader, Kim Jong-un, met last month in Pyongyang, the North’s capital, both sides agreed to disarm Panmunjom to turn it into what South Korea hopes will become a “symbol of peace” on the divided peninsula.

But the speed of inter-Korean engagement, including the fate of many of those projects, depends on whether the United Nations Security Council will ease sanctions against the North because they will eventually involve South Korean investments there.

In a meeting in Paris on Monday with the French president, Emmanuel Macron, Mr. Moon suggested that the Security Council, where France is one of the five permanent members, start easing sanctions by the time the process of denuclearizing North Korea has become “irreversible.”

In one month following the opening of the inter-Korean liaison office in the North’s border town of Kaesong on Sept. 14, the two Koreas have had more than sixty face-to-face meetings, according to Kim Chang-su, a deputy chief of the office. “This means that the two sides have held face-to-face contacts more than two times every day,” he said. “The liaison office appears to be taking root well as a communication channel for 24 hours (a day), 365 days (a year).”

South Korea has proposed to North Korea installing internet networks for its staff stationed at the joint liaison office. The two sides are likely to discuss the issue, which would mark the first online connection for South Koreans in North Korea.

“Sanctions and inter-Korean cooperation cannot go together. Let us crush the barbed wire that cuts through our peninsula with our tractors,” said the Korean Peasants League. 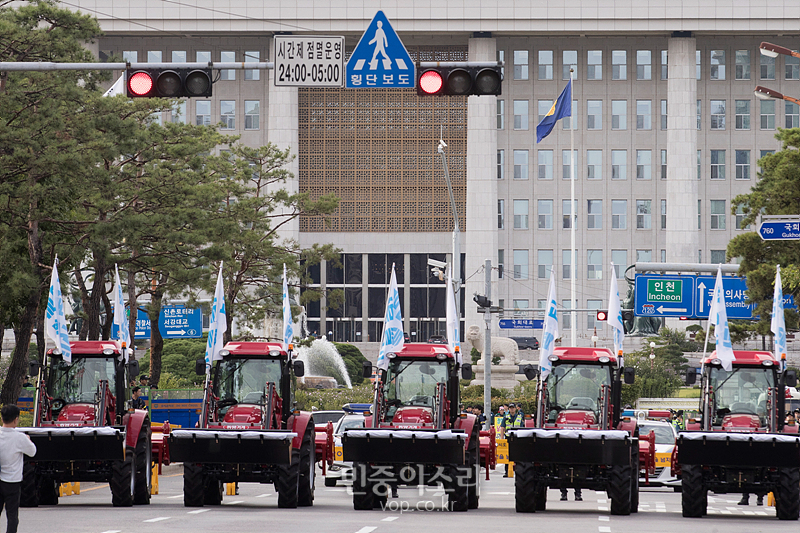 Pope says he will go to Pyongyang if invited

South Korean President Moon Jae-in met Pope Francis on Thursday and relayed an invitation from North Korean leader Kim Jong Un for the pope to visit Pyongyang. Moon’s top press secretary quoted the pope as saying he would “unconditionally give an answer if an (official) invitation arrives and I can go,” according to Yonhap.

The United States opposes a plan by South and North Korea to set up a no-fly zone over the Military Demarcation Line that divides Korea, according to Reuters.

The military accord, sealed during last month’s summit in Pyongyang, includes a halt in “all hostile acts,” a no-fly zone above the border and a gradual removal of landmines and guard posts within the Demilitarized Zone.

But U.S. officials have raised concerns that it could undermine defense readiness and comes without substantial progress on denuclearization. U.S. Secretary of State Pompeo expressed “discontent” with the agreement during a phone call, according to South Korea’s Foreign Minister Kang Kyung-hwa.

The KCNA, North Korea’s state-run media on Tuesday said the Trump administration’s insistence that sanctions relief will only follow Pyongyang’s denuclearization is the primary “obstacle” to progress in DPRK-U.S. nuclear negotiations, and urged Washington to take “trustful measures.”

In a commentary titled “What do ill-boding remarks from the U.S. signify,” author Kim Chol Myong denounced Washington for alleged two-faced behavior. He said the U.S.’s “stubborn” position on sanctions showed its continued “hostile policy” against the DPRK and runs counter to the DPRK-U.S. Joint Statement signed by President Trump and Chairman Kim in June.

“In front it thrust its hand asking for friendship but behind the scene it is making irrelevant remarks,” KCNA said in an English-language version of the editorial. “It is something quite far away from common sense, to say nothing of diplomatic practices.”

U.S. government officials anticipate the second U.S.-North Korea summit will take place in mid-November and are reportedly considering Stockholm or Geneva as the venue of the summit. U.S. envoy on North Korea Stephen Biegun and his North Korean counterpart Choe Son Hui are expected to meet soon to work out the details of the date and location, as well as agenda of the summit.

North Korean leader Kim Jong-un is planning to visit Russia before the US midterm elections on Nov. 6, according to the Russian daily newspaper Izvestia.

began. Russian Foreign Minister Sergey Lavrov met Kim during a visit to Pyongyang on May 31 and delivered a personal letter from Russian President Vladimir Putin inviting Kim to visit Russia.

Kim’s visit to Russia may give him more room to maneuver in the second North Korea-US summit. Chinese President Xi Jinping may also make his first visit to Pyongyang before Kim’s summit with Trump, who has said the summit would take place after the US midterm elections.