Above Photo:
Cannon Ball, ND – The water protector camp that for months formed a beachhead against Dakota Access Pipeline construction was destroyed midday Thursday, February 23rd. A combination of law enforcement and military units forced aside the last inhabitants so the remaining structures could be demolished, while a Customs and Border Protection (CBP) helicopter orbited overhead.

The Army Corps of Engineers’ deadline of Wednesday, February 22nd, demanding water protectors clear out of the main #NoDAPL camp, passed without law enforcement entering the camp, although several journalists were attacked (see our full report).

The main camp, which several weeks ago hosted thousands of people, known as Oceti Sakowin or Oceti Oyate, often called ‘Oceti’ for short, was dismantled with 46 arrests reported on Thursday (AP).

If you missed the heavily militarized eviction of the main #NoDAPL encampment, here is a snippet from our #LIVE feed https://t.co/R36xX5Yw17 pic.twitter.com/IlvqH9qzXu

The eviction force was comprised of a variety of agencies including the Morton County Sheriff’s Department, North Dakota Highway Patrol, Bismarck Police Department, the North Dakota National Guard, and federal agents from the Bureau of Alcohol, Tobacco, and Firearms and Explosives (ATF). Out-of-state law enforcement from the Wisconsin State Patrol (WSP) was also deployed under the Emergency Management Assistance Compact (EMAC). [See our Nov. 26th report with WSP EMAC deployment and budget documents.] Just after 11 am, the combined eviction forces began their approach into the camp. Between a few dozen to a hundred water protectors were estimated remaining in camp at that time, with most having left the previous day but some having returned that morning by walking across the frozen Cannonball River. Bypassing the main entrance, two Bobcat-type skid steer loaders were used to clear a path down the snowy hill into the north end of Oceti Oyate. Bearcat and MRAP armored vehicles, accompanied by a large number of Humvees and sheriff’s deputies, police with riot gear and live weapons, descended down the path into the camp.

Different teams of law enforcement roamed throughout the north end of the Oceti camp, establishing perimeters and performing military-style sweeps of tipis and other structure, entering each structure with guns drawn.

WATCH as militarized police knife open a sheltered structure during their eviction of the main #NoDAPL encampment https://t.co/YDWKf0paPs pic.twitter.com/uuu7eGUt1l

Several water protectors who remained in the camp were arrested. Some of the water protectors had been engaged in prayer at the time of arrest. It was reported that other arrestees told the officers that they were violating treaties as they made arrests. A group of veterans was also arrested while passively resisting. A separate force with utility terrain vehicles entered from the east. As on the previous day, North Dakota authorities arrested several journalists who were reporting on the scene. Independent journalists Ed Higgins and Christopher Francisco were both arrested while documenting the eviction. One water protector held a position on top of large structure for some time:

After the eviction force finished clearing the entire grounds of the camp, they formed a curved formation facing south, and began pushing the remaining crowd back, forcing people to retreat onto the iced-over Cannonball River.

As this push advanced, law enforcement charged forward and several arrests were made, and at least six officers fell face down in the mud and snow as they attempted to run downhill towards targets who evaded them. Two water protectors were also tackled and arrested during the charge.

As some water protectors remained on the frozen Cannonball River, others had gathered to observe the eviction from the Rosebud camp on the south side of the river on Standing Rock Indian Reservation land. A water protector explained to Unicorn Riot that the hasty destruction of the structures would cause more pollution needlessly.

After 2:50 pm, after the North Dakota state eviction force had completed their takeover of Oceti Oyate, Bureau of Indian Affairs (BIA) federal police began to push people out of the Rosebud camp which had also reportedly been slated for eviction yesterday. Park Rangers from the United States National Parks Service (NPS) assisted BIA police in evicting the Rosebud camp on the reservation side of the Cannonball River.

In an interview with Unicorn Riot, Cheyenne River Sioux Tribe Chairman Harold Frazier pledged that resistance to the DAPL pipeline would continue, and he said he intended to work on getting the BIA disbanded through legislation. 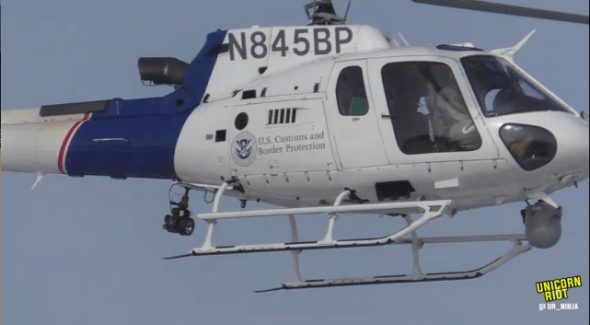 The Department of Homeland Security’s Customs and Border Protection surveillance helicopter passed over Unicorn Riot’s position on Thursday at close range many times.

As of Thursday night, the Water Protector Legal Collective confirmed that at least 45 people had been arrested during government operations to clear the Oceti and Rosebud camps. 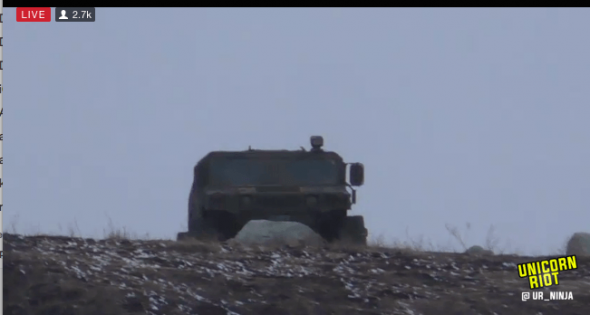 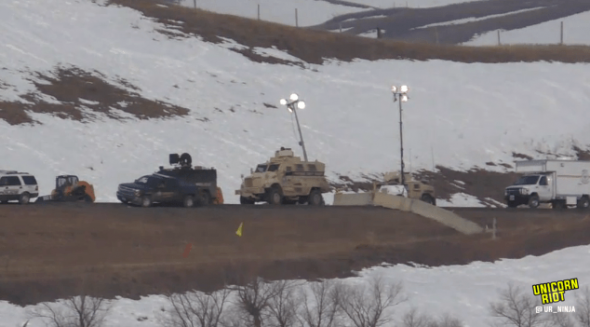 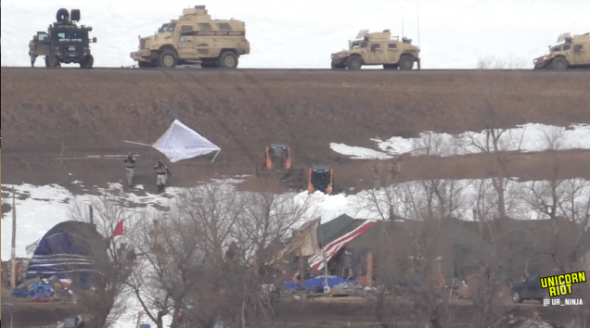 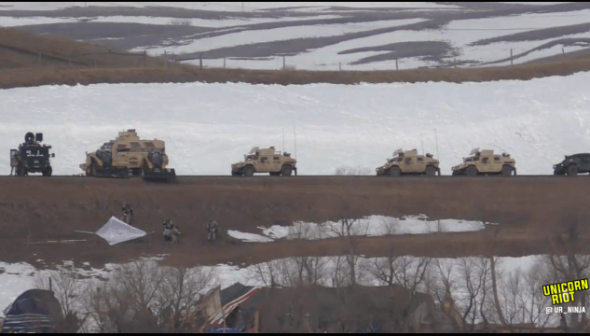 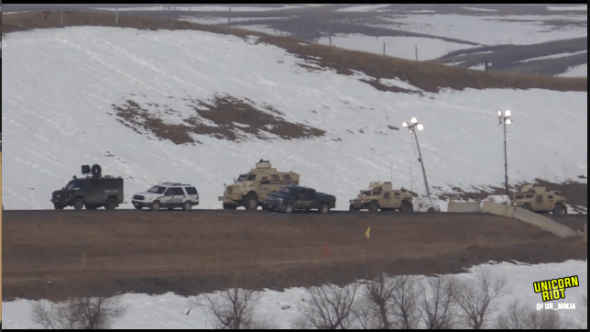 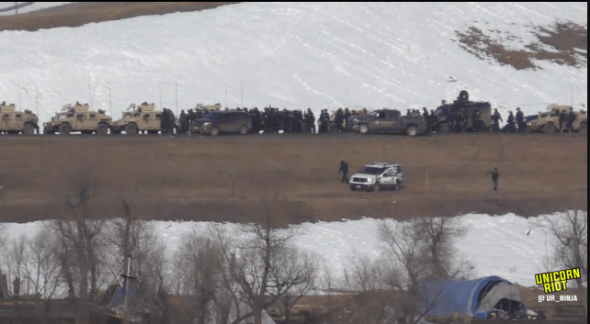