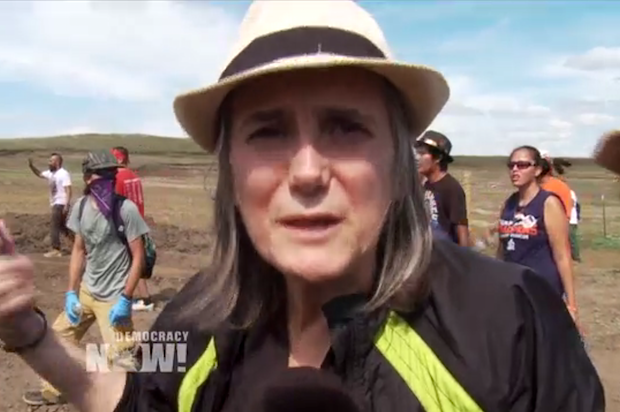 North Dakota prosecutors have indicated they have dropped the trespassing charges against Amy Goodman, and instead will charge her with participating in a “riot.”

“I came back to North Dakota to fight a trespass charge. They saw that they could never make that charge stick, so now they want to charge me with rioting,” Goodman said on Saturday. “I wasn’t trespassing, I wasn’t engaging in a riot, I was doing my job as a journalist by covering a violent attack on Native American protesters.”

Award-winning journalist and the host of Democracy Now, Amy Goodman, has been facing an outrageous arrest warrant in North Dakota for “criminal trespass” since early September—the result of her merely doing her job as a reporter and covering private police committing violence against oil pipeline protesters in North Dakota.

Today, she announced she would return to the state in order to turn herself in and contest the charges on Monday.

“I will go back to North Dakota to fight this charge,” she said. “It is a clear violation of the First Amendment,” said Goodman. “I was doing my job as a journalist, covering a violent attack on Native American protesters.”

It couldn’t be more obvious that Ms. Goodman is being charged solely for her journalism and the impact it had on the oil pipeline debate. Here’s howDemocracy Now described its news coverage that led to the charges against Ms. Goodman:

On Saturday, September 3, Democracy Now! filmed security guards working for the pipeline company attacking protesters. The report showed guards unleashing dogs and using pepper spray and featured people with bite injuries and a dog with blood on its mouth and nose.

Democracy Now!’s report went viral online, was viewed more than 14 million times on Facebook and was rebroadcast on many outlets, including CBS, NBC, NPR, CNN, MSNBCand the Huffington Post.

Rolling Stone’s Matt Tiabbi detailed what happened as a result of the segment Democracy Now aired:

Shortly thereafter, the Obama administration intervened, stopping pipeline construction on Army Corps land and asking the company to “voluntarily pause all construction activity” in the area.

This victory for the Standing Rock Sioux would likely not have been possible without the aggressive independent reporting ofDemocracy Now!, whose pictures created significant public pressure.

Yet because, in the words of the prosecutor, “Everything she reported on was from the position of justifying the protest actions,” she now faces criminal charges. Read that sentence again. The state is literally charging her for nothing else beyond exercising her rights as a journalist.

We fully support Ms. Goodman for taking this incredibly brave stance and being willing to return North Dakota to fight these charges directly, but make no mistake: North Dakota authorities should have dropped these obviously illegal charges as soon as they were issued.

How North Dakota did not immediately realize this was all a horrible mistake on their part is beyond reason. The only explanation seems to be that they want to silence First Amendment-protected speech and intimidate other journalists into not covering the protests. Since the charges were issued a month ago, their actions have been universally condemned by press freedom advocates, and there is simply no justification for letting it stand.

Not only are they flagrantly violating the Constitution, they are giving every two bit dictator and corrupt police establishment around the world every excuse to point to this episode and arrest journalists abroad, while making a mockery of our own press freedom protections at home.

Goodman is not a stranger to unconstitutional actions by local police. She was arrested in Minnesota in 2008 for covering the protests around the Republican National Convention. She later sued and won $100,000 from the state for infringing her First Amendment rights.

We hope and expect similar accountability for the authorities here when the dust clears. But in the meantime, North Dakota should stop embarrassing itself and drop all charges against Amy Goodman, and any other journalist who may be suffering the same fate, immediately.