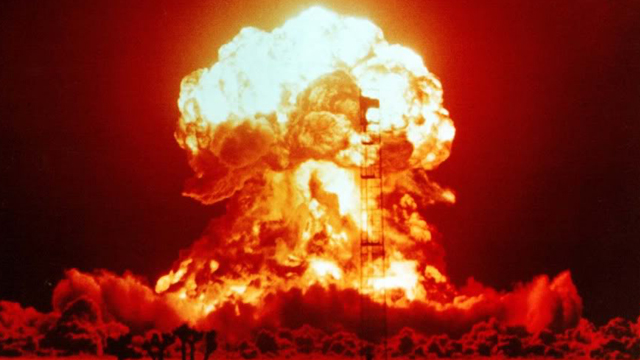 North Korea Does Not Threaten World Peace, The US Does

President Donald Trump is 71 and Supreme Leader Kim Jong Un is 27, but if they ever met, would there be a grown-up in the room?

One of them knows full well that North Korea is not a threat to world peace and is not even a serious threat to South Korea. The one who knows that is not Donald Trump. Or if he does know it, he’s choosing to inflate the North Korean “threat” even more than some of his predecessors.

But wait, didn’t North Korea just fire a missile in the general direction of the United States? Yes indeed, and like every other North Korean missile (except the ones that blew up on launch), it hit smack dab in the Sea of Japan, unpleasantly for aquatic life but a danger to no one else. This is, after all, exactly what the US does periodically to the Pacific Ocean from California’s Vandenberg Air Force Base, generally causing yawns around the world.

Deputy Defense Secretary Robert Work witnessed just such a US test (the 15th or so in five years) in February 2016, after telling reporters the purpose was to demonstrate an effective US nuclear arsenal to Russia, China, and North Korea:

That’s exactly why we do this. We and the Russians and the Chinese routinely do test shots to prove that the operational missiles that we have are reliable. And that is a signal … that we are prepared to use nuclear weapons in defense of our country if necessary.

Not only is that perspective less than comforting, it includes a major tell. For reasons that may be obvious but unspoken, North Korea is not allowed to do what the US, Russia, and China do. That’s the price of being a member of the US-determined Axis of Evil. That may be a stupid foreign policy position (Exhibit A: Iraq), but it’s American stupidity, not Korean stupidity. The North Koreans are well aware that they do not have “operational missiles that … are reliable.”

Do as US says, not as US does

US-imposed rules forbid other countries like North Korea or Iran from following rational patterns of self-defense, even in the face of overt US threats. And when North Korea ignores US rules and hits the ocean with another rocket, the US ratchets up the hysteria as if the North Korean launch were a hostile act while the Vandenberg launches are only benign peace-keeping splashes. The US framing of the world is clearly nuts, but we’re so used to it we hardly notice anymore.

Not only does North Korea pose no serious threat now, its hypothetical future threat is largely imaginary. Whatever military might North Korea has is unlikely to be used outside its own country unless the US or someone else attacks it first. That might well lead to all hell breaking loose, but it’s the only thing that will as far as North Korea is concerned. Washington is baffled: What doesn’t North Korea understand about its duty to do what the US tells it to do?

Assessed objectively, North Korea’s missile tests demonstrate a missile program proceeding haltingly, with frequent failures as well as “terrifying” successes. What terrified Washington about the July 3 North Korean missile launch is the presently imaginary threat that the Independence Day ICBM prototype could deliver a nuclear warhead to the United States. It can’t. That’s a pure future threat, if it’s a threat at all. Capturing the widely proclaimed fear with merely modest hype, Business Insider led its report on the new North Korean missile with this: “North Korea claims that it has launched its first intercontinental ballistic missile, or ICBM, which experts say could have the ability to reach Alaska.” (Reuters upped the ante, reporting that “some experts believe [the missile] has the range to reach Alaska and Hawaii and perhaps the U.S. Pacific Northwest.” As with other reports, these experts go unnamed and unchallenged.)

Unpack all that and what do you have? A North Korean claim, inflated by anonymous experts, selling a worst-case scenario. The North Koreans also claimed that the missile could hit any location on the planet. So nobody’s even trying to tell the truth here. The missile actually went about 580 miles, which isn’t even close to qualifying as an ICBM. The nearest point in Alaska (not target, just rocks) is about 3,000 miles away. Any point on the planet is 12,000 miles away, give or take a few thousand.

But the North Koreans have nuclear weapons. Yes they do, maybe even 20 of them, all smaller than the one the US dropped on Hiroshima. At this point there’s no evidence North Korea can deliver its nuclear weapons anywhere by any technology much more advanced than donkey cart. By comparison, the US nuclear arsenal, which was once over 31,000 warheads, is now down to 4,000, with about 1,900 methods of delivery to anywhere on the planet, and almost all those warheads are many times more powerful than the Hiroshima bomb. For all that some worry about aging nuclear weapons, the US is not even close to being an inviting target to attack with impunity.

Isn’t 64 years long enough to get a peace treaty?

The Korean War began June 27, 1950, when North Korea invaded the south. The armistice was signed July 27, 1953, ending hostilities, but not the war. There is a cease-fire but no peace treaty. The US entered the war under UN auspices. Congress never declared war, but supported the war with appropriations. Currently, some in Congress are seeking legislation to prevent the president from taking any military action against North Korea without explicit permission from Congress. That hardly seems to matter.

The new president of South Korea wants to negotiate with North Korea, but that hardly seems to matter either. South Korea engaged in perennial massive war games with the US that North Korea deems threatening, as would any neighboring country facing the same reality. Worse, the US has introduced anti-missile weapons into South Korea without telling the South Korean president.

And President Trump publicly blames China for not bringing North Korea to heel, as if China had either that responsibility or ability. China has increased trade with North Korea by a reported 40 percent, which should be a stabilizing factor, especially over the long term. But the US is demanding short-term results.

What could the world community do to reverse this growing threat, real or imagined, from North Korea? It would help to allow North Korea to feel safe and unthreatened, maybe even as safe and unthreatened as Vermont. That, as Korea expert Christine Ahn argued on Democracy NOW, would require President Trump to do what he claims to be good at: negotiating, making a deal. Something very like this view was formally articulated to President Trump in a June 28 letter from such policy experts as former secretary of state George Schultz, former defense secretary William Perry, and former senator Richard Lugar:

As experts with decades of military, political, and technical involvement with North Korean issues, we strongly urge your administration to begin discussions with North Korea…. Talking is not a reward or a concession to Pyongyang and should not be construed as signaling acceptance of a nuclear-armed North Korea. It is a necessary step to establishing communication to avoid a nuclear catastrophe. The key danger today is not that North Korea would launch a surprise nuclear attack. Kim Jong Un is not irrational and highly values preserving his regime. Instead the primary danger is a miscalculation or mistake that could lead to war. [emphasis added]

A more colloquial way of saying much the same thing might be that you don’t control a bratty child by burning down the house, unless you’re another bratty child yourself, and you don’t really care all that much about the house.

William M. Boardman has over 40 years experience in theatre, radio, TV, print journalism, and non-fiction, including 20 years in the Vermont judiciary. He has received honors from Writers Guild of America, Corporation for Public Broadcasting, Vermont Life magazine, and an Emmy Award nomination from the Academy of Television Arts and Sciences.