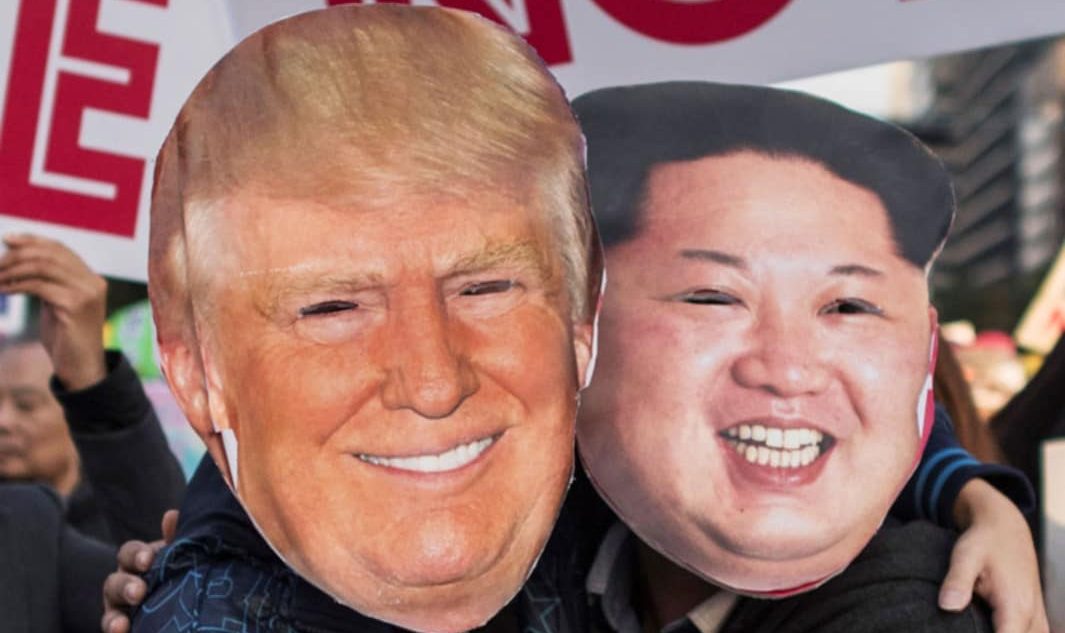 North Korea Has the Upper Hand In Negotiations With Trump

Above: Demonstrators dressed as Kim Jong-un and Donald Trump embrace during a peace rally in Seoul on November 5, 2017.

North Korea’s Kim Jong-un met with Donald Trump of the United States in Singapore. This was the first meeting of the heads of government of these two countries. The United States has been at war with North Korea since 1950. Three years into that war, which destroyed most of the infrastructure in North Korea, the two countries—and South Korea—agreed to a halt in the active fighting. But the war did not end. It remains intact. A massive military deployment by the United States at the edge of North Korea maintains the fear inside the Korean Peninsula of annihilation. This is what makes the summit between Kim and Trump so important. Threats of war are now at a low point.

North Korea’s Kim arrived in Singapore on an Air China flight. This is significant. It was China that guaranteed the safety and security of Kim. Heads of government of North Korea had previously only been to fraternal countries—whether China or the USSR. China’s role in this summit guaranteed that Kim would be treated with respect. The government of Singapore—which recognizes both North Korea and the United States—hosted Kim and brokered the outlines of the conversation. It is important to pay attention to the Chinese context for these discussions.

The United States might have the world’s largest military, but it is certainly not dictating the terms to North Korea in these negotiations. The situation here is not as it was with East Germany (the DDR) in the 1980s. Then, the USSR was near collapse and the leadership of the DDR was unable to put forward a coherent plan for the reunification of Germany that did not result in the erasure of the DDR. That reunification was truly a surrender. It meant that the new Germany joined NATO, and that the Western military alliance crept closer and closer to the Russian border.

The Chinese authorities know this history well. They are aware that they are far stronger than the USSR in the 1980s and that they will have an active role in the talks between North and South Korea as well as with the United States. Their absence from the table itself should not be misread to mean that the Chinese are not whispering into Kim’s ear.

Kim and Trump spent time together discussing the various important issues on the table—namely, North Korean fears of an attack by the United States and North Korea’s nuclear weapons. Both these issues were addressed in the brief statement signed by the two men and released by the two sides. They affirmed the essence of the Panmunjom Declaration drafted by the North’s Kim and South Korea’s Moon Jae-in on April 27, 2018.

A summit such as this rarely offers the full plan for the way forward. The importance of this summit is merely that it happened. Trump, who has disoriented his G7 allies during their recent summit in Canada, now feels the need to do something successful. He is a man driven by his ego. The summit with North Korea shows him as a man of action, a man willing to buck decades of inaction to—as he likes to put it—“make a deal.” But this ‘deal’ has little to do with Trump or his team.

North Korea, backed by China, has written the timetable for these negotiations. A year ago, it appeared as if North Korea’s missile and nuclear tests would egg the Trump administration into a dangerous military confrontation. Trump even threatened to devastate the peninsula. But he did not have an ally in the newly elected South Korean leader—Moon Jae-in—who came to power when the conservatives floundered in corruption scandals. Moon, a calm and sincere person, held fast to his commitments to peace despite the North Korean missile and nuclear tests and the belligerence of the Trump administration. Out of nowhere, it seemed, Kim inaugurated the “Olympics diplomacy.” It is what drew the two Koreas together and outflanked the United States. Trump now had to follow the tune being hummed by Moon and Kim.

Chinese Foreign Minister Wang Yi’s statement is important. He said that it is significant that Kim and Trump met to “have an equal conversation.” This, he said, “is creating a new history.” So it is.

Vijay Prashad is a writing fellow at the Independent Media Institute. He is the chief editor of LeftWord Books and the director of Tricontinental: Institute for Social Research. He is also the author of Red Star Over the Third World (LeftWord, 2017) and The Death of the Nation and the Future of the Arab Revolution (University of California Press, 2016), among other books.