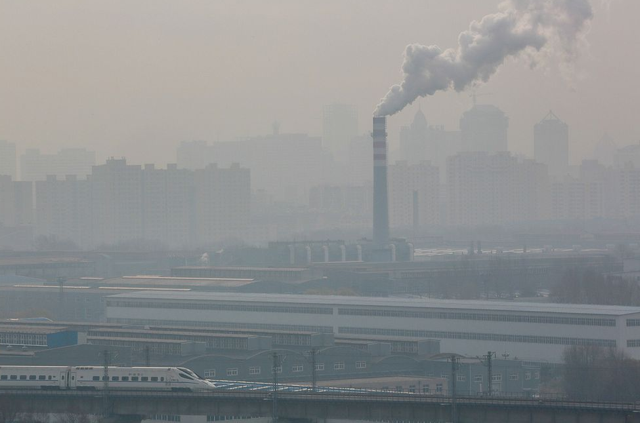 Carbon dioxide levels in the atmosphere crossed a significant threshold in April, just weeks after the White House released a major report on the impacts of climate change and just days before the Obama Administration is set to propose new restrictions on emissions from coal-fired power plants.

The concentration of CO₂, widely seen as the most important greenhouse gas, averaged more than 400 parts per million (ppm) for the entire month of April across the Northern Hemisphere, the first time scientists have seen levels that high and that widespread for an entire month.

CO₂ levels above 400 ppm were recorded for the first time in 2012 in the Arctic. On a few days in the spring of 2013 they exceeded that threshold at Mauna Loa, Hawaii, where measurements have been made since 1958.

But this is the first time scientists have seen a whole month over 400 ppm at monitoring stations across the Northern Hemisphere, says Gavin Schmidt, a climate scientist with NASA’s Goddard Institute for Space Studies in New York City, who was not involved with the measurements.

“Four hundred ppm is not in and of itself particularly important physically,” says Schmidt, “but it is emblematic of the fact that we are pushing the climate system into territory that is uncharted.”

He notes that environmental groups have been talking up the 400-ppm threshold because “humans like big round numbers.”

The 400-ppm level represents a 40 percent increase in carbon dioxide since the start of the industrial revolution, the WMO points out.

The CO₂ concentration in the Northern Hemisphere is a bit ahead of that in the Southern Hemisphere because there are more industrial sources of emissions in the north. The Northern Hemisphere also has more land and vegetation, so it dominates the seasonal CO₂ cycle: The level in the atmosphere peaks around May, then falls as the northern growing season shifts into high gear and plants start drawing large amounts of CO₂ from the air.

That natural cycle creates zigzags in the atmospheric CO₂ trajectory. The steady, long-term rise comes from human emissions. The WMO predicts that by 2015 or 2016 the CO₂ level will average more than 400 ppm across the entire planet for the entire year. Last year the global annual average was around 395 ppm, according to the U.S. National Oceanic and Atmospheric Administration. Lately it’s been rising two to three ppm a year.

“This should serve as yet another wake-up call about the constantly rising levels of greenhouse gases, which are driving climate change,” Jarraud added. “If we are to preserve our planet for future generations, we need urgent action to curb new emissions of these heat-trapping gases.”

Schmidt says carbon dioxide levels are higher now than they have been for at least 800,000 years—the age of the oldest ice scientists have been able to retrieve from cores drilled into the Antarctic ice sheet. Bubbles of ancient air trapped in those cores prove that as ice ages have come and gone over the past 800,000 years, the CO₂ concentration has varied from about 180 to 280 ppm. Based on other evidence, scientists consider it likely that CO₂ has not been above 400 ppm for millions of years.

Within a few years, says Schmidt, a level as low as 400 ppm will be a distant memory.

In April the United Nation’s international panel of climate experts warned that carbon dioxide levels would need to be kept below 450 ppm to keep the temperature rise below two degrees. If the current emission trends continue, that threshold will be passed in two to three decades.

When it comes to avoiding drastic warming and substantial sea-level rise, said Jarraud, “time is running out.”