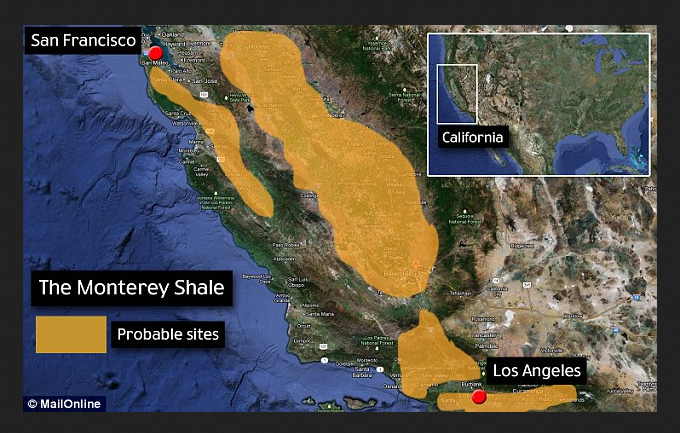 Oakland, California (May 20, 2014) — In an article released this evening, the Los Angeles Times reports that the U.S. Energy Information Administration (EIA) has drastically reduced its estimate of recoverable oil in California’s Monterey shale formation from 13.7 billion barrels to just 0.6 billion barrels—a reduction of over 95%.

The downgrade has major implications for California’s energy and economic future, as well as the debate over hydraulic fracturing (“fracking”) and other forms of well stimulation-enabled oil development. The perception of an impending oil boom has dominated energy policy discussions in California since the release of a 2011 report by the EIA which had estimated up to 15.4 billion barrels of recoverable tight oil—64% of the nation’s total—in the state’s Monterey shale formation. The estimate was widely cited by drilling proponents, and economic forecasts based on it projected millions of new jobs and billions in new tax revenue.

“The oil had always been a statistical fantasy,” said geoscientist J. David Hughes, author of Drilling California: A Reality Check on the Monterey Shale, an influential report critical of the EIA’s original Monterey estimates. “Left out of all the hoopla was the fact that the EIA’s estimate was little more than a back-of-the-envelope calculation.”

Hughes’s report, published by PSE Healthy Energy and Post Carbon Institute in December 2013, was the first public analysis of actual oil production data from the Monterey Shale and the formation’s geological characteristics. The report found that all data suggested that the EIA estimates were wildly over-optimistic.  INTEK, Inc., the source of the EIA’s original estimate, has since admitted that its Monterey figures were derived from technical reports and presentations from oil companies rather than hard data.

“We’re pleased that the EIA has corrected what was a groundless and highly misleading over-estimation of the potential of the Monterey,” said Asher Miller, Executive Director of Post Carbon Institute. “We hope that everyone—from the EIA to policymakers and the media—will learn a cautionary lesson from what transpired here in California as we wrestle with questions about what the future of American energy policy can and should be.”

“Now that Californians have a more accurate idea of what promise the Monterey Shale does and does not hold,” added Dr. Seth B. Shonkoff, Executive Director of Physicians, Scientists and Engineers for Health Energy, “we must carefully weigh the benefits against the costs associated with fracking and other forms of well stimulation-enabled oil and gas development.”