Not Even Wal-Mart Is Ruthless Enough For Wall Street

By Pete Dolack, www.systemicdisorder.wordpress.com
October 24, 2015
| Educate!
Not Even Wal-Mart Is Ruthless Enough For Wall Street2015-10-242015-10-24https://popularresistance-uploads.s3.amazonaws.com/uploads/2017/12/popres-shorter.pngPopularResistance.Orghttps://popularresistance-uploads.s3.amazonaws.com/uploads/2013/07/r-WALMART-large570-150x62.jpg200px200px

As ruthless as Wal-Mart is, Wall Street has decided the retailer is not ruthless enough. Incredible though it might seem, financiers have been punishing Wal-Mart in part because the company has raised its minimum wage to $9 an hour.

Plans to increase slightly abysmally low pay and invest more money on Internet operations have Wall Street in an ornery mood because profits might be hurt. Is Wal-Mart Stores Inc. about to cease being a going concern? Hardly. For the first three quarters of this year, Wal-Mart has racked up a net income of US$11.8 billion — and the holiday season isn’t here yet. For the five previous fiscal years, the retailer reported a composite net income of $80.2 billion.

Alas, this isn’t good enough for Wall Street and its “what did you do for me this quarter” mentality. Traders have driven down the price of Wal-Mart stock by more than one-third in 2015, and a public statement on October 14 by the company that its earnings might be a little lower next year prompted the biggest one-day fall in its stock in 25 years. 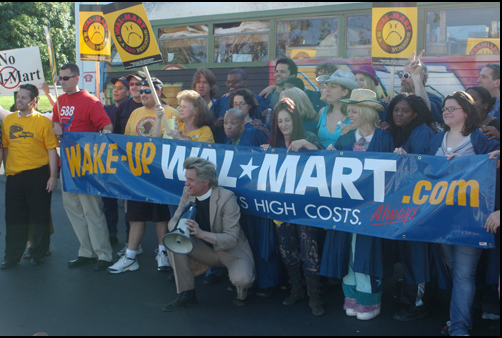 Wal-Mart did attempt to offset that news by also announcing a new $20 billion buyback of shares, but not even blowing that kiss to financiers served to lift their moods. (A stock buyback is when a company buys its stock from shareholders at a premium to the trading price, which gives an immediate bonus to the seller and reduces the number of shares that divvy up the profits; news of this sort ordinarily sends financiers into paroxysms of ecstasy.)

This is the company that is the most ruthless in accelerating the trend of moving manufacturing to the locations with the lowest wages, legendary for its relentless pressure on its suppliers to manufacture at such low cost that they have no choice but to move their production to China, or Bangladesh, or Vietnam, because the suppliers can’t pay more than starvation wages and remain in business.

This is a company that pays it employees so little that they skip meals and organize food drives; receives so many government subsidies that the public pays about $1 million per store in the United States; and is estimated to avoid $1 billion per year in U.S. taxes through its use of tax loopholes.

We live under an economic system that is so insane that this has now been deemed by financiers to be insufficiently brutal.

The stack of billions is never high enough

How much further down can people be pushed? And when has so much money been amassed that even the most greedy are satiated? The answer to the first question has yet to be answered, but the answer to the second question seems to be “never.”

The four heirs to the Wal-Mart fortune are collectively worth $161 billion — they are the world’s richest family, richer even than the Koch brothers. The four are each, individually, among the 12 richest people on Earth. The Walton family pocket billions every year just from dividends — their company paid nearly $6.4 billion in dividends in 2014 alone, and the Walton family owns half the shares. The company spent another $6.1 billion in 2014 on buying back its stock. That’s $12.5 billion in one year handed out to financiers and the Walton family.

So it would seem that Wal-Mart could afford to pay its employees more.

Although the company said part of the pressure on profits will come from investments in building a larger Internet presence, it largely blamed its expected dip in profits on two planned boosts in pay, first to $9 an hour this year and then to $10 an hour in 2016. Reuters reported it this way:

“Wal-Mart Chief Executive Doug McMillon said a $1.5 billion investment in wages and training, including raising the minimum store wage to $10 an hour from $9, were needed to improve customer service and would account for three-quarters of the expected 6 percent to 12 percent drop in earnings per share next year.”

One and a half billion in wages and training for an unspecified period of time. Remember, this is a company that averages $16 billion in net profit per year. And in almost half the states of the U.S., mandatory minimum-wage raises would have forced stores in those states to raise the wage anyway.

Or to put this another way, the raises to $10 per hour — assuming the stated cost to the company is real — could be fully funded by cutting what the company spends on stock buybacks by one-quarter.

But it’s never Wall Street’s turn to cut back, is it?

No toleration of employee defense

Jess Levin, communications director for Making Change At Walmart, a campaign to advocate for Wal-Mart employees backed by the United Food & Commercial Workers, noted that pay raises could easily be offset by cutting hours:

“Walmart should be ashamed for trying to blame its failures on the so-called wage increases. The truth is that hard-working Walmart employees all across the country began seeing their hours cut soon after the new wages were announced. The idea that this truly drove down Walmart’s profits is a fairytale.”

What isn’t a fairy tale is Wal-Mart’s attacks on any attempt at organizing its stores. An In These Times report noted:

“A massive array of strategies has been tested, with little success: organizing department by department (when butchers at a Texas store voted for the union, Walmart eliminated all its butchers); organizing in Quebec, where laws favor unions (Walmart closed the store); organizing in strong union towns, like Las Vegas (several campaigns failed after supervisors intimidated a majority of workers out of unionizing).”

There are real-world consequences to these developments. A 2007 study by the Economic Policy Institute found that Wal-Mart alone was responsible for the loss of 200,000 U.S. jobs to China for the years 2001 to 2006, with Wal-Mart accounting for two-thirds of all U.S. manufacturing jobs lost during that period. Wal-Mart more recently has begun shifting manufacturing to countries like Bangladesh that are low-cost alternatives to China.

The Institute for Global Labour and Human Rights reports that garment workers in Bangladesh earn between 33 and 42 cents per hour, or up to $20 for a six-day, 48-hour work week. On the backs of those super-exploited workers, and on the backs of exploited store and warehouse employees, arise the fabulous wealth of the Walton family, Wal-Mart executives and financiers. Doug McMillion, the Wal-Mart chief executive officer, was paid $25.6 million for 2014 — or 24,500 times more than a Bangladeshi sweatshop worker working for a Wal-Mart subcontractor earns.

More is never enough — Wall Street is cracking its whip, demanding no letup in this massive upward flow of money. No slack is allowed. When do we stop believing this machine can be reformed?