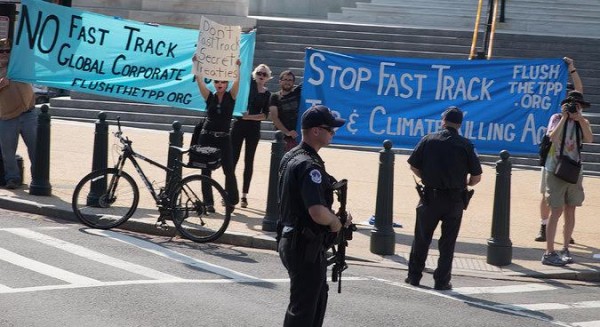 Not Over Yet, Some Tough Votes Ahead On Fast Track

Above: For most of this week, Popular Resistance organized a Rigged Trade Rebellion outside of Congress to stop Fast Track. The photo above is on June 12, 2015 as President Obama drove into the Capitol driveway. Source NY Times.

While we all cheered the failure to pass Trade Adjustment Assistance (TAA) in the hope that its defeat would stop Fast Track, the House quickly voted to pass Fast Track Trade Promotion Authority (TPA) with 219 votes (218 is a majority but there were some abstentions). This situation means that the House and Senate have not passed identical versions of Fast Track (because the Senate version includes TAA) so Fast Track cannot go to the President’s desk yet to be signed into law. There are several possible scenarios ahead that leave the outcome of the fight against Fast Track uncertain.

While much of the media described today’s votes as a complete victory for those who oppose Fast Track and the Obama trade agenda, the fact is that we have some difficult challenges ahead. We won an important battle, and it was a tremendous victory especially when it is considered that President Obama did all he could including a special trip to the Congress for a private meeting with the Democratic leadership and the entire Democratic Caucus.

But, it is not over. Speaker Boehner called for reconsideration of TAA and a re-vote is supposed to happen within two legislative days so there may be another vote as early as Monday afternoon.  We need to hold the line on TAA to prevent any form of TAA from passing the House and prepare for a vote in the Senate if a new form of TAA passes or if the TPA bill passed in the House goes back to the Senate without TAA.

Possibilities in the House

Since we won by a large majority on TAA in the House with a vote tally of 302 to 126 (76 vote difference), it is unlikely (but not impossible) that the current form of TAA would pass in a re-vote. No doubt this weekend President Obama is working over time to convince Democrats to change their vote and Majority Leader Boehner is looking for Republicans willing to go against their views and vote for TAA. One Member told us after today’s vote that it is now a game of numbers. Politico does the numbers:

If increased Democratic support cannot be achieved, passage would very likely require a mixture of Republicans voting for TAA in order to pass Fast Track and Democrats changing their position because they do not want to embarrass the president. Today, many of the “no” votes came after TAA failed to get a majority and everybody knew it would fail so they voted “no” or switched their vote to “no”. How firm are the votes of those who joined in after it had already failed? If the current TAA is not amended and it passes in the re-vote, there would be no need for any further action in the Senate and Fast Track would become law.

If the re-vote fails, a second possibility is for TAA to be re-written and voted on as a new bill in order to gain majority support. There were three problems with the current form of TAA: (1) Funding TAA by Medicare cuts; (2) Too small a budget; and (3) Failure to cover all workers, especially public workers.

The Medicare cuts were most significant in that almost no Democrat wants to be on record voting against Medicare.  Prior

to the vote, leadership of both parties came up with an alternative source of revenue (tax enforcement revenue). If this were written into a new TAA, the Medicare problem could be solved.  It is not clear how real these tax enforcement dollars are so House leadership could also expand the budget for TAA and solve the budget problem as well. These two changes alone might be enough to gain a lot of Democratic votes.  These changes would probably not lose a lot of Republican votes; in fact Republican leadership still might be able to convince a group of Republicans to vote for TAA in order to get Fast Track passed.

The third problem is a significant one especially since under the Trade In Services Agreement (TISA) public workers will be threatened. For example TISA could result in privatizing the US Postal Service which is the nation’s second-largest civilian employer after Wal-Mart with about 536,000 career workers. Adding public workers to TAA would require additional funding since more workers would be covered and this might be unpopular with Republicans.

If TAA is amended and passed in the House, the Senate would have to vote again – the House bill could either go to the Senate and be voted on as an original bill; or it could go to a conference committee where differences would be ironed out and then both chambers (House and Senate) would have to hold a re-vote.

We want our allies in the House to vote “no” on TAA no matter what kind of amendments are made to the bill. Now that TPA has passed, stopping TAA is critical for stopping Fast Track. The House TPA (Fast Track) without TAA would be much more difficult to pass in the Senate.  Our goal in the House is for TAA bill to be defeated.

When TPA came before the Senate, it was bundled together as one bill with TAA. It took a 62-38 vote to end debate on the bill and allow it to move forward.  Other than Senators Collins (R-ME), Lee (R-UT), Paul (R-KY), Sessions (R-AL), Shelby (R-AL) and Enzi (R-WY) (who did not vote), all Republicans voted for the bill. In order to stop TPA in the Senate on a re-vote, three additional votes would be needed to prevent the new bill from reaching 60 votes and passing.

One possible scenario is that the House fails to pass TAA and sends a TPA bill to the Senate without TAA. This would be the most likely scenario that would lead to failure in the Senate. There were many Senators who insisted on TAA being included, indeed, some wanted a larger TAA.

Zach Carter of Huffington Post compiled comments of senators who said they would not vote for Fast Track without TPA. They include Ron Wyden (D-OR),  Maria Cantwell (D-WA), Patty Murray (D-WA), Ben Cardin (D-MD), Claire McCaskill (D-MO), Chris Coons (D-DE) and Diane Feinstein (D-CA).  There may be additional senators who hold this view but did not speak publicly about the issue.

In addition, Senator Maria Cantwell (D-WA) was promised that the Export – Import Bank would be renewed in order to get her vote, that promise was not fulfilled so she is a possible “no” vote if this returns to the Senate.

The other possibility is that the House passes TAA in its present form or a new version. This would make it very difficult to stop TPA in the Senate. Other than Cantwell, it is hard to see who would change their vote. Senator Lindsay Graham (R-SC) had insisted that currency manipulation be included in the TPA. It wasn’t but he voted for the TPA anyway. Perhaps now that he is running for president, he might vote against TPA.

The immediate task is to pressure Members of the House of Representatives to oppose any form of TAA.

Once again the Congress needs to be flooded with phone calls from across the political spectrum. The populist rebellion that has been taking place, especially during the last week, needs to continue so that Members of Congress know that they are risking their future election if TPA becomes law and rigged corporate trade agreements are given an easy path to becoming law.

It is also important to remind Members while they are home this weekend that you want them to vote “no” on TAA. Here is a link to a list of those Members who voted “no” (with their phone numbers and twitter handles) .Thank your Member if she or he voted “no” and tell her or him to stay strong and not to compromise. Perhaps there will be an opportunity to reach her or him at a public event this weekend.

The Popular Resistance Rapid Response Team will return to Capitol Hill on Monday to continue the Rigged Trade Rebellion. If you are able to make it to DC, we encourage you to come. This is a critical time to make the opposition to Fast Track highly visible. We have been staying at the corner of Independence Ave and New Jersey Ave SE so that we can speak to Members as they walk back and forth between their offices and the Capitol for votes.

One staffer mentioned to us that Members sometimes decide how they will vote just minutes beforehand. It could be that seeing your sign or speaking with you just prior to a vote could make a difference in what they do.

We still have the possibility of stopping Fast Track. Let’s put it over the edge in the next few weeks. You can follow the work to stop Fast Track at www.FlushtheTPP.org. And contact Mackenzie@PopularResistance.org if you have questions or are planning to come to DC.