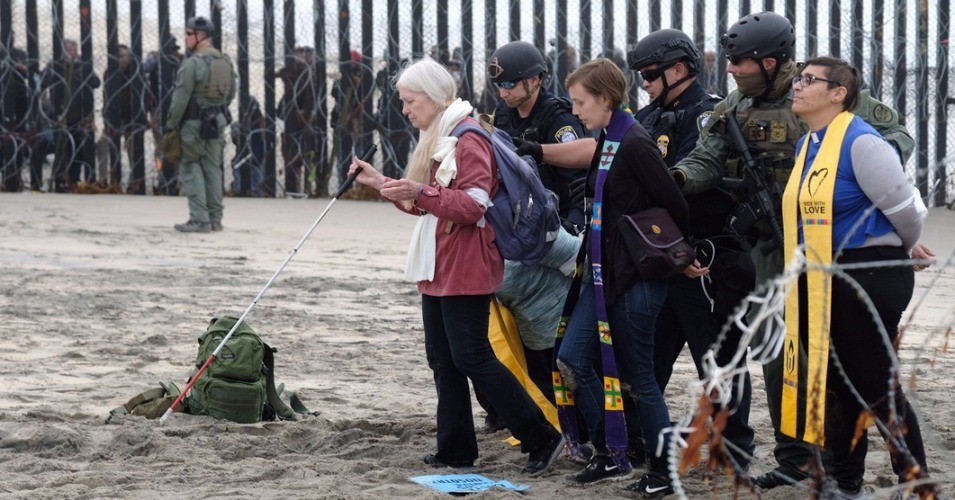 ‘Not Your Average Demonstration’: Faith Leaders Arrested Demanding Demilitarization Of US Border

Above Photo: At least 32 faith leaders were arrested at the U.S.-Mexico border on Monday as they protested the militarization of the border and the Trump administration’s treatment of asylum-seekers. Photo: @UniteThePoor/Twitter)

“In the face of unfounded fear, racism, and violence, courageous action is necessary.”

Dozens of faith leaders were arrested at the U.S.-Mexico border in California on Monday after they confronted border patrol agents, demanding the demilitarization of the area and calling on the Trump administration to end its detention and deportation of asylum-seekers.

“How we act in these moments determines who we will become as a nation.” —Bishop Minerva G. Carcaño

More than 400 religious leaders and immigrant rights advocates attended the Human Rights Day protest, with many carrying signs reading “Love Knows No Borders” and “No Cages, No Walls.” At least 32 were arrested, with authorities in riot gear claiming leaders from a number of faiths had entered a “restricted area” as they handcuffed them.

“We believe in freedom, and we know we cannot rest until it comes. So, with that, we are ready,” said Rev. Liz Theoharis, co-chair of the Poor People’s Campaign just before the leaders were arrested.

I’ve seen a lot of faith-based protests, and been to the border with faith delegations twice myself. I’ve never seen anything like this. Not your average demonstration, confronting Border Patrol is putting yourself in serious danger. #LoveKnowsNoBorders pic.twitter.com/ZwqGEUrCA9

We put our bodies on the line for #MigrantJustice today, coming face to face with violent border agents. They assaulted us as we prayed and sang. My brothers Ossama and @HussamA were arrested and are still detained. #LoveKnowsNoBorders, and our faith calls us to action. pic.twitter.com/HVLngFogfi

People of many faiths are on their knees at the border, singing and demanding that the US government respect the right to migrate, demilitarize border communities, and end the detention and deportation of immigrants. #LoveKnowsNoBorders #MigrantCaravan pic.twitter.com/YkI4VWUOtc

“As a Quaker, I believe there is that of the divine in all of us,” said Laura Boyce of the American Friends Service Committee (AFSC), which organized the action. “This belief calls us to stand with those fleeing violence and poverty, and to call on our government to uphold the human rights of migrants and end the militarization of border communities. In the face of unfounded fear, racism, and violence, courageous action is necessary.”

The rally was the first event in a planned week of direct actions, ending on International Migrants Day on December 18. Those who participated came from a number of Christian denominations as well as Jewish, Muslim, Hindu, and other faiths.

A small group of Central American refugees has been the latest target of President Donald Trump’s xenophobic fear-mongering regarding immigration; they arrived at the border late last month after fleeing violence and unrest in their home countries and traveling for weeks.

The protest came two weeks after border patrol agents closed the border’s busiest port of entry—which the Trump administration has repeatedly claimed it wants immigrants to enter the country through—and fired tear gas at asylum seekers including many families with young children.

“Showing up to welcome and bless children, mothers, and fathers seeking asylum from very difficult and dehumanizing circumstances is the right and humane thing to do,” said Bishop Minerva G. Carcaño, who read a list of names of people who have been killed by border patrol agents and while crossing the border. “How we act in these moments determines who we will become as a nation.”

Faith leaders and moral witnesses walk in a silent procession to the border wall in solidarity with all those seeking refuge. #LoveKnowsNoBorders #PoorPeoplesCampaign

Demonstrators kneel after Border Patrol moves them back to concertina wire at border near Friendship Park. This is first day of #LoveKnowsNoBorders demonstrations. pic.twitter.com/eHbu8WbSvk