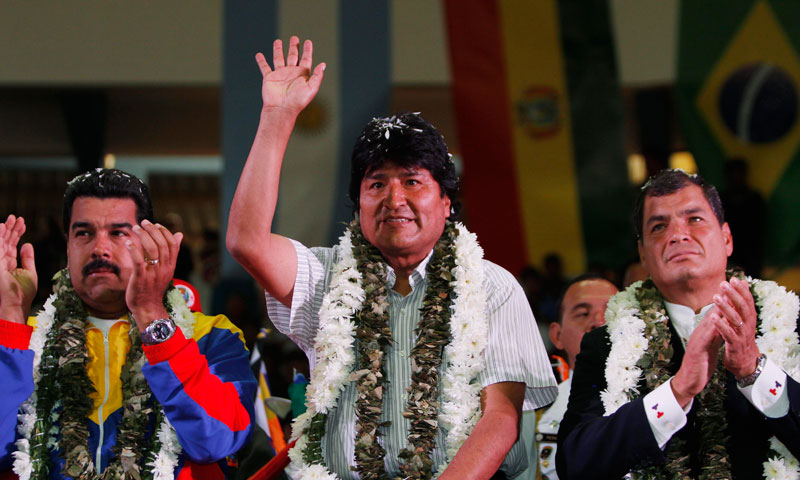 ‘Not Your Colony’: Bolivia Threatens Shutdown of US Embassy

Note: US intelligence leaker Edward Snowden has applied to another six countries for asylum, WikiLeaks said Friday on its Twitter feed. They will not be named at this time due to attempted US interference,” the message said.

Bolivia’s president threatened to close the US embassy as leftist Latin American leaders joined him in blasting Europe and the United States after his plane was rerouted amid suspicions US fugitive Edward Snowden was aboard.

President Evo Morales, who has suggested the United States pressured European nations to deny him their airspace, warned he would “study, if necessary, closing the US embassy in Bolivia.”

“We don’t need a US embassy in Bolivia,” he said. “My hand would not shake to close the US embassy. We have dignity, sovereignty. Without the United States, we are better politically, democratically.”

Morales arrived home late Wednesday after a long layover in Vienna, saying his plane was diverted there because it was barred from flying over four European nations, sparking outrage among Latin American leaders.

The Bolivian leader’s air odyssey began hours after Morales declared in Moscow he would be willing to consider an asylum application from Snowden, who is seeking sanctuary in several Latin American nations to evade US espionage charges.

In a show of support, Presidents Nicolas Maduro of Venezuela, Cristina Kirchner of Argentina, Rafael Correa of Ecuador, Jose Mujica of Uruguay and Desi Bouterse of Suriname met with Morales in the central city of Cochabamba.

At a rally before the meeting, Maduro claimed that the US Central Intelligence Agency (CIA) had ordered France, Portugal, Italy and Spain to deny access to Morales’s plane on Tuesday.

“A minister of one of these European governments personally told us by telephone that they were going to apologize because they were surprised, and that those who gave the order to aviation authorities in this country … were the CIA,” he said.

After the meeting, the leaders issued a statement calling on the European governments to publicly apologize “in relation to the serious incidents that occurred,” but Morales said earlier that apologies were not enough.

Correa said the leaders would “take decisions and show that we won’t accept this sort of humiliation against any country of (Latin) America.”

“Imagine if this happened to a European head of state, if this had happened to the president of the United States. It probably would have been a casus belli, a case for war,” he said. “They think they can attack, crush, destroy international law.”

Correa had called for a larger summit gathering leaders of the Union of South American Nations (UNASUR), but the presidents of Brazil, Colombia, Chile and Peru were not present, even though they too condemned the incident.

In an implicit criticism of his absent peers, Correa said: “If what happened doesn’t justify a meeting of heads of state of our South America, what justifies one?”

Colombian President Juan Manuel Santos voiced support for Morales but warned on Twitter against “converting this into a diplomatic crisis between Latin America and the EU (European Union).”

Bolivian officials accused France, Portugal, Italy and Spain of denying entry to Morales’s jet late Tuesday as he flew back home from Russia due to “unfounded rumors” that Snowden was on board.

Morales has also lashed out at the United States, urging Europeans to “free themselves from the US empire.”

Snowden, a former National Security Agency contractor, is in legal limbo in a Moscow airport, trying to escape US justice after leaking details of a vast US phone and Internet surveillance program.Morales likened his own situation to a “13-hour kidnapping.”

France has since apologized for temporarily refusing entry to Morales’s jet, with President Francois Hollande saying there was “conflicting information” about the passengers.

The Bolivian government has lodged a complaint with the United Nations and planned another to the UN Human Rights Commission.