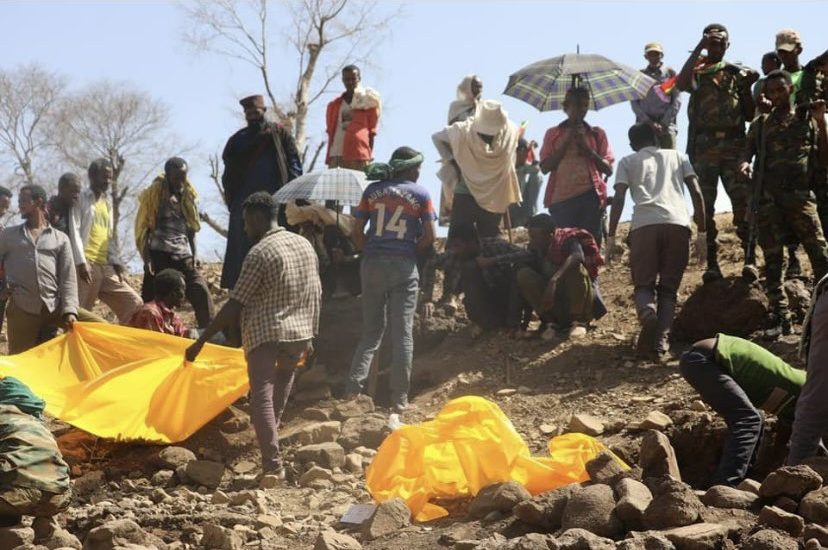 The discovery of mass graves and underground prisons in Ethiopia has exposed the crimes of the Tigray Peoples’ Liberation Front or TPLF, the U.S. puppets who tyrannized Ethiopia for 27 years with divide-and-conquer ethnic politics from 1991 to 2018, when a popular uprising forced them from power. The TPLF then retreated to Tigray Region and, in November 2020, started the ongoing civil war by attacking the national army’s Northern Command.

US officialdom and both state and corporate media in the US have since described the Ethiopian conflict as the government’s persecution of the Tigrayan People’s Front and the Tigrayan people. Biden’s USAID Chief and arch warmonger Samantha Power warned of “Tigray genocide” and the usual humanitarian war scenario began to unfold. WHO Director General Dr. Tedros Adhanom Ghebreyesus , the TPLF’s former Foreign Minister, shamelessly decried the victimization of Tigray from his high profile position as manager of the global pandemic, and Ethiopians shuddered that they were on track to become the next Libya or Syria.

From the very beginning, Biden’s UN Ambassador Linda Thomas Greenfield insisted that none of Ethiopia’s regional borders be redrawn, most particularly those of what the TPLF had methodically annexed and renamed “Western Tigray” after seizing power in 1991. This land, including Welkait,  Tsegede, and Tselemt, was historically populated and cultivated by Amhara language speakers.

Why is it so important to the TPLF and its longtime backers in the US? Unlike Tigray Region, it includes rich farmland and it borders Sudan, creating one of the only possibilities for resupplying the TPLF with munitions, food, and whatever else they need to continue fighting the war. (The only other possibilities are aid convoys or flights or unlawful penetration of Ethiopian airspace.)

On April 7, I attended a press conference at Ethiopia’s University of Gondar, where researchers presented their findings about mass graves and underground prisons created to dominate and destroy Amhara people who had lived there prior to the TPLF occupation. After a year’s study, they estimated that as many as 59,000 Amhara people may have died at the hands of the TPLF.

Ten days later I spoke to Ethiopian American multimedia journalist Sheba Tekeste, who joined photographer Jemal Countess to travel through some of the canyons and cliffs where the mass graves and prisons were uncovered. We spoke in the lobby of the Goha Hotel in Addis Ababa.

AG: Sheba, do you think there’s a way to study and commemorate this and make it part of the national dialogue, broadly speaking, in which it would serve to move beyond ethnicity towards an Ethiopian identity, rather than further exacerbating ethnic conflict?

ST: I think that’s a great question. I think when you start hearing stories like this, then other people will come forward, and this will really make a change. And it will come out that the killing wasn’t just ethnically charged. I’ve spoken to people here in Addis about other stories—about people who were disappeared and/or killed just for opposing the TPLF leadership, regardless of their ethnic group. They were just opposing extreme authoritarianism that made people so afraid that they kept things to themselves. And there were many, many victims of the TPLF, not just in Welkait. The Welkait story just breaks it open and encourages more people to come forward.

AG: Will the proposed changes to the Constitution eliminate the ethnic identification of regions, Tigray, Amhara, Oromia, and so forth?

ST: It absolutely should. If it doesn’t do that, then what’s it worth? What is it for? That’s the first objective, that should be the first objective if they want to save lives. That’s where they start, by completely revamping this whole language of ethnic politics, it should be about people’s rights and nativity and what they need to survive and not about, you know, “I speak this language so I have this land and more rights than anyone else on this land.” That should be the primary objective.