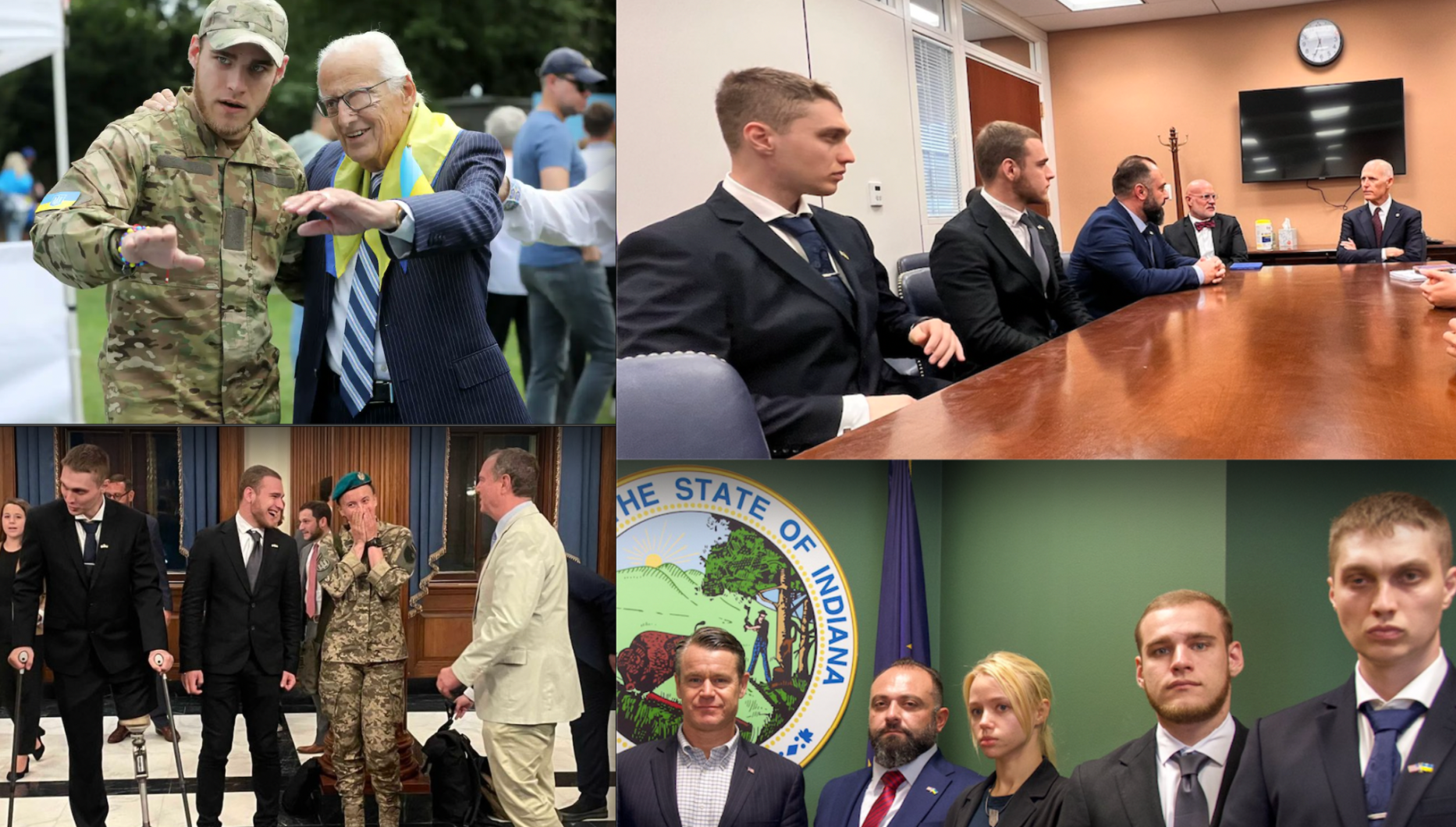 After meeting with at least 50 members of Congress, soldiers of the neo-Nazi Azov Regiment toured the US to auction off swastika-inspired patches and lobby for an end to restrictions on US arms and training.

This article was originally published by Moss Robeson’s Ukes, Kooks and Spooks blog and lightly edited by The Grayzone. Read part one of Robeson’s series on Azov’s US tour here.

This September, a delegation of the Ukrainian neo-Nazi-led Azov movement arrived in the United States, at a time when myth making about the far-right network’s “depoliticization” had reached a fever pitch. By this time, the New York Times had ceased referring to Azov as “openly neo-Nazi,” and was referring to the ultra-nationalist organization as “celebrated.”

Since news broke of Azov’s US tour, more information has come to light about the ultra-nationalist organization’s outreach in the country, including efforts by Azov to reverse Congress’ ban on supplying it with arms and training.

The Azov delegation included three veterans of the regiment formerly holed up in the Azovstal steel plant in Mariupol. They were led by Giorgi Kuparashvili, the only fighter not taken prisoner by the Russians.

According to Kuparashvili, a cofounder and instructor of the Azov Regiment, his delegation met over fifty members of Congress, far more than anyone has realized. Among those who showed up to greet Azov on Capitol Hill was Rep. Adam Schiff, the California Democrat who spent the Trump era leading Russiagate theatrics and clamored for shipments of offensive US weapons to Ukraine.

The Azov delegation has met at least two more members of Congress: Michael Waltz (R-FL) in Washington, and Mikie Sherrill (D-NJ) at a Ukrainian festival in Whippany, New Jersey. pic.twitter.com/xPvEmJlJXN

The trio was accompanied by two spouses and a mother of POWs captured at Azovstal. This included Kateryna Prokopenko, the wife of the far-right commander of the Azov Regiment, Denys Prokopenko, who was freed in a prisoner exchange and declared a Hero of Ukraine during her visit to the United States. The delegation’s other Azov wife was Yulia Fedosyuk, the leader of “Silver of the Rose,” an anti-feminist, anti-gay group linked to the Azov movement, according to journalist Oleksiy Kuzmenko.

.@5050oD video on #DomesticViolence features anti-feminist 🇺🇦 groupuscule “Silver of the Rose”which describes itself as rooted in "European Identity", "traditional view on women", opposed to “neo-liberal feminism”. The shot used is SOR carrying a coffin with “Feminism” on it https://t.co/ZHVUrWKBj5 pic.twitter.com/Z2ZXoRrtFc

Earlier this year, Prokopenko and Fedosyuk met with Pope Francis. While in the United States, they spoke at a small rally in front of the White House, appeared for an interview on the pro-Trump channel Newsmax, and took meetings with numerous members of Congress. Newsmax separately interviewed two of the Azov veterans, including Kuparashvili.

On Saturday, September 24, half of the delegation including Kuparashvili appeared before a sizable audience at a Ukrainian church in Detroit. The Ukrainian-American Crisis Response Committee of Michigan (UACRCM), a lobbying outfit formed earlier this year, live-streamed the event, which was organized by US partners of the Azov movement’s charity wing.

Among the more prominent Ukrainian nationalists present for the event was Borys Potapenko, a member of the UACRCM and an international coordinator of the Stepan Bandera-founded Organization of Ukrainian Nationalists (OUN-B), which collaborated with Nazi Germany throughout much of World War Two. Potapenko is also among the leaders of the far-right “Capitulation Resistance Movement” in Ukraine, which allied with Azov’s National Corps against Volodymyr Zelensky in 2019–22. (More about this coming soon on the “Bandera Lobby Blog”…)

Giorgi Kuparashvili spoke to the audience in English, focusing largely on the Azov delegation’s success in Washington. “We went to the Senators, Congressmen, from both parties. Honestly, the majority we met, there were like over fifty of them, and head of their fractions [Democrats and Republicans], they all gave 100% support. They started to work right from their office in front of us, picked up the phone, and started calling to different organizations which can influence — right now, we’re having problems with the Geneva Conventions. Geneva Conventions is not working, not for Russia…”

Later, Kuparashvili indicated that the delegation had more on its political agenda than detailing Russian war crimes, criticizing the International Red Cross, and securing the release of Azov POWs. He predicted that this year, Congress will lift its ban on the U.S. supplying arms and training to the Azov Regiment.

In his closing remarks, Giorgi Kuparashvili appeared to take aim at his least two favorite members of Congress: Ro Khanna, a liberal Democrat from Silicon Valley, thanks to whom Congress curtailed U.S. support for the Azov Regiment in 2018, and Max Rose, a former Congressman and right-wing Democrat from Staten Island, who called on the State Department to label the Azov Regiment a “Foreign Terrorist Organization” in 2020.

“From year ’14, ’15, ’16, until today,” claimed Kuparashvili, “there is a bill which, I don’t remember the name, but the Congressman who lobbied, I don’t know how… He left Congress a couple years ago, he initiated to put the Azov as a restriction in a bill. This week, we talked to all the Congressmen and Senators, everybody understands, because when you bring the bill to Congress, they have to read it. Unfortunately, nobody read it, so they approved it again.”

“Now we told them, ‘are you supporting this?’ And everybody knows it’s just a mistake in it. As the Congressmen and Senators says, this bill goes until 2025. They’re not going to wait until 2025, and gonna make the correction on this year, to remove it from there… We’re dealing with the situation and fixing it, and majority of the job is already done, and Congress and Senate, both parties are supporting this.”

Before the bidding commenced, Kuparashvili insisted that things were not as they appear. “If you know, there is a symbol,” he said, tapping the patch on his left arm, “which I’m gonna explain now, because they call us Nazis, all this crap.” At that point he mockingly put his hand over his mouth, and said, “sorry my language — ha!”

With the myth-making about Azov's supposed depoliticization reaching new heights, this cofounder of the regiment couldn't even get the story straight whether they "got rid" of their far-right elements or never had them to begin with. https://t.co/As3xHlAgvV

According to Kuparashvili, before, only Azov members could wear their swastika patches, but he bestowed permission on the audience to place their bids, because “now, all of you are Azov.” There was another disclaimer that Kuparashvili shared only after the winners emerged. “It’s a responsibility,” he said.

“We’re just handing over it,” Kuparashvili told the audience about the Azov Regiment patches. “We’re giving to those our responsibility. We have the soldiers where they go through the basic training, go through all the trainings, and difficulties. If they don’t deserve, you can’t graduate… But if you deserve it, with this comes a responsibility… Your National Idea is Ukraine. You gotta fight for it. Not just put it in a room or a shelf somewhere, but you gotta fight for it. Fight for your National Idea…” The winners each saluted Kuparashvili in the Azov fashion.

There was a charity auction of three Azov Regiment wolfsangel patches at the recent Azov event in Detroit. Azov Regiment cofounder Giorgi Kuparashvili then informed the winners, "you gotta fight for it," and appeared to symbolically swear them in. pic.twitter.com/VY1vCnECTt

Two days later, the Ukrainian Institute of Modern Art in Chicago hosted another Azov charity auction, co-sponsored by the Banderite-led Illinois Division of the Ukrainian Congress Committee of America. Its most influential member, Pavlo Bandriwsky, an OUN-B leader in Chicago known as “the Strategist”, took pictures with the Azov veterans. This event featured a battle flag of the Azov Regiment that was apparently auctioned off with the promise that every surviving member will sign it after the war is won. The Consul Generals of Germany and Poland also spoke at the event.

On Saturday, October 1, after returning to Washington, the full delegation, except for Kateryna Prokopenko, who left to be reunited with her husband in Turkey, made an appearance at Stanford University. Yulia Fedosyuk concluded her remarks, “Glory to the Azov Regiment.” At some point, Stanford professor Michael McFaul, the dangerously foolish former US Ambassador to Russia (2012–14), stopped by to offer words of support for Ukraine, if not the Azov Regiment itself.

Earlier this year, Stanford’s Center for International Security and Cooperation (CISAC) published a detailed report on the “Azov Movement… a far-right nationalist network.” Michael McFaul directs the Freeman Spogli Institute for International Studies, of which the CISAC is part. He apparently took no issue with the neo-Nazi symbol projected behind him.

This might not have been the Azov delegation’s last stop in the United States, but it would be rather fitting. Stanford University is in the Congressional district adjacent to Ro Khanna, whose restrictions on US support for the Azov Regiment should be lifted this year, according to one of the event’s speakers. But these days, even Khanna might not object.