Now Is The Time To Win National Improved Medicare For All

National improved Medicare for all is making tremendous progress during the 2020 election cycle. Democratic presidential candidates, Senators Bernie Sanders and Elizabeth Warren, who advocate for it, are achieving record numbers of contributions and performing strongly in the polls. Candidates like former Vice President Joe Biden, who opposes Medicare for all, and Senator Kamala Harris, who came out with a phony plan she called Medicare for all, are losing ground.

To learn more about NIMA, sign up for the HOPE campaign and join the national calls. The next call will be on Monday night, November 4 at 9:00 pm Eastern/6:00 pm Pacific. Wendell Potter will speak about the opposition’s tactics and how to counter them. Register here. 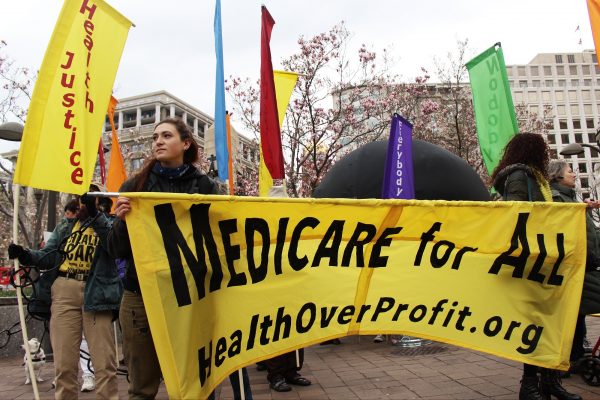 A whistleblower for the insurance industry tells the truth:

“The business model of for-profit health insurance depends on denying care to people who need it. These corporations can’t be reasoned with, only defeated.”

One of the false talking points of opponents of NIMA is that people want to keep their private insurance. In reality, the employer-based healthcare system is not working for employers or employees. The current system is resulting in very high costs to individuals, now surpassing $20,000 annually for the average family. The cost of insurance is rising faster than incomes, making insurance impossible to afford. This is one reason why the number of uninsured, now 27.5 million, is growing.  The soaring cost of healthcare is one reason why 58 percent of small business owners support Medicare for all.

A recent poll found that pollsters can manipulate the outcome by using anti-Medicare talking points, but when voters are told the truth they prefer Medicare for all. For example, this survey found that when people hear that under Medicare for All you can keep your preferred doctors and hospitals, support climbs to a clear majority of 55 percent. Support among Democrats gets to 78 percent. For independents, 56 percent support Medicare for all. People also said they trust the federal government over private insurers to control healthcare costs, by 20 points. Kaiser, which has been tracking public opinion of the issue, finds a majority of the public supports Medicare for all.

Polls actually find that what people hate is instability in their health insurance. Instability is inherent in private health plans as employers will change insurance, shrink coverage or increase prices. They will even cut-off insurance due to the cost or when there is a labor conflict. Medicare for all is the most stable option — from birth to death people would be fully covered by NIMA. This allows people to change jobs or stop working to take care of children or elderly parents and still keep their health coverage.

NIMA means real choices for people as they can go to any doctor, hospital, clinic or other providers they prefer while with private insurance, patients are limited to narrow insurance networks of providers and limited choices of care. People believe in universal access and only Medicare for all can accomplish that. And, people understand that healthcare should be treated as a right, not as a commodity. Healthcare is a human right, not something employees should have to bargain for.

The truth is that people don’t love their insurance, they love having access to health care and put up with insurance companies because that is how the current healthcare system is financed. Health insurers use their media connections and the politicians they fund to put forward the false message that private insurance is essential. We do not need private insurance as it is an expensive middleman that adds nothing to health care except tremendous administrative costs and bureaucracy accounting for one-third of total healthcare spending. 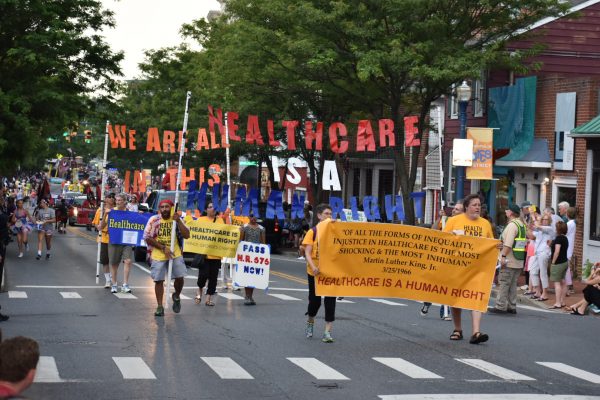 Bogus Argument: We can’t afford it

One of the most senseless arguments against NIMA is that we can’t afford it. In reality, the current system is the most wasteful, inefficient and costly in the world. The spectre of high costs is a bogeyman promulgated by industry astroturf groups. Medicare for all will save money by cutting the bureaucracy and negotiating for fair prices for goods and services. We can’t afford NOT to move to a Medicare for All single-payer healthcare system.

Currently, nearly one third the cost of healthcare is due to the complex for-profit health insurance industry. About half of that is insurance company costs, e.g., advertising, executive salaries, dividends, real estate. The other half is the administrative cost they create for providers. Many hospitals have more staff working on billing to deal with the insurance industry than they have nurses. Healthcare is approaching 20 percent of GDP. Under NIMA, it will gradually go down to about 12 percent, similar to other wealthy countries with single-payer or national health service systems.

There is a lot of fearmongering about Medicare for all but the reality is people will pay less, have better care and more choice. Groups that oppose single-payer, like the Urban Institute, use false assumptions to heighten the cost of Medicare for all. Unfortunately, the false information on cost is likely to continue as the Congressional Budget Office has packed its 19-member panel that advises them on health policy with insurance, pharmaceutical, and hospital interests.

One way to confuse people on cost is by claiming federal spending on healthcare will go up.  Of course, it would because Medicare for all is a federally-funded program. While total spending will decrease and costs for people and businesses will go down, federal spending will go up.
When the media reports on the cost of NIMA, it often seems like they have lost the ability to do the math. They do not report that over a decade the cost would be $2.1 trillion less than projections of spending under the current US healthcare system. Fairness and Accuracy in Reporting finds that the Washington Post does not want voters to know that Medicare will save money. This is part of an effort by the media to make it seem like Medicare for all is impossible to afford.

A major cost problem is the high price charged by hospitals. The current system allows them to charge just about whatever they like, prices vary wildly, and they fleece the poor. Some hospitals even sue people over their medical bills, though some have stopped collecting medical bills because of exposure and public pressure.  Other hospitals are closing, leaving towns without access to healthcare and creating a crisis in many rural and poor urban areas.  Medicare for all would control hospital pricing and ameliorate the problem of hospitals closing. 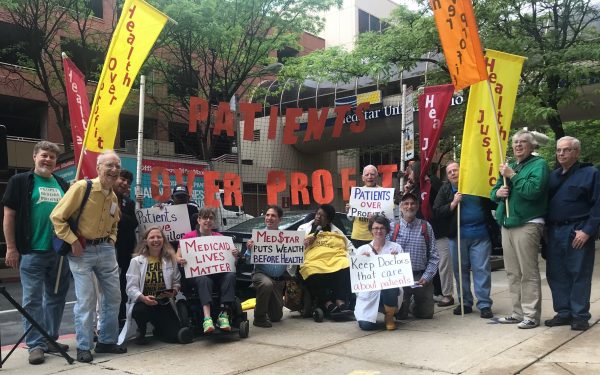 As Medicare for all becomes more popular, opponents put forward false solutions. The medical industry gives tens of millions of dollars to House candidates who oppose Medicare for all. The movement has exposed these false approaches. Rep. Pramila Jayapal, the lead sponsor of the health bill in the House, has criticized Democrats for using the Medicare label for policies that are not Medicare for all.

Presidential candidate Pete Buttigieg, the biggest recipient of health care dollars, is pushing a false approach, Medicare for Some, which is merely a public option and cannot solve the health crisis. Biden, who urges fixing the Affordable Care Act, puts out false information about Medicare for all. The ACA is fundamentally flawed as it is based on the inefficient private health insurance industry. Harris has waffled on her support for Medicare for all. Her bad policy was also bad politics as it coincided with her drop in the polls.

The Republicans don’t have a realistic solution to the healthcare crisis. When they sought to shrink health insurance coverage in the 2018 elections, there were massive protests. Trump’s actions to further privatize Medicare are also counterproductive. The insurance industry’s Medicare Advantage, which the industry is pushing because they profit from it, is more expensive and provides less coverage than traditional Medicare. 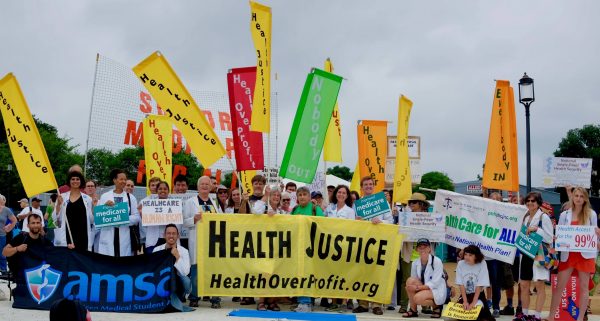 Real Solutions to the Healthcare Crisis

The US is in a healthcare crisis. This is a snapshot of the gravity of that crisis.

Medicare for all would be transformative in many ways.  It would not only solve the healthcare crisis but would also cut poverty by more than 20 percent and would be a big tax cut for workers.

The first step to solve the US health crisis is National Improved Medicare for All. A majority of House Democrats have signed on to the Medicare for all bill, HR 1384. They need to be pushed to be more active in their advocacy for it. Presidential candidate, Howie Hawkins, has a plan that goes beyond NIMA to a fully public, community-controlled healthcare system. Hawkins’ system would prevent the healthcare profiteers from being able to game the system.

We have come a long way in the past ten years from single-payer healthcare being “off the table” to it being a major topic in the 2020 presidential election. We have the opportunity to win this if we keep educating, organizing and pushing candidates and elected officials. Visit our HOPE campaign for the tools and information you need to be an effective advocate for National Improved Medicare for All.