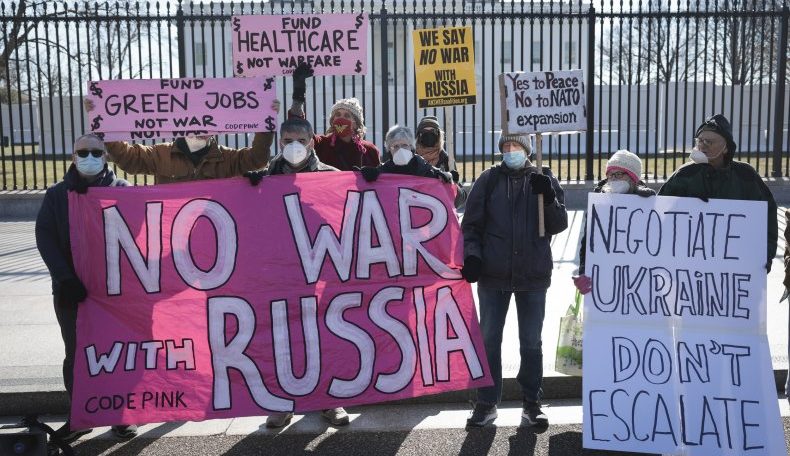 Call To Action: No War With Russia Over Ukraine

Above photo: Anti-war protesters gather in front of the White House on Jan. 27 to demonstrate against escalating tensions with Russia. Win McNamee/Getty Images.

Stop the War with Russia over Ukraine!

We must act now to stop the war with Russia over Ukraine, a war that would risk becoming a dangerous conflict between nuclear states. As people residing in the United States, we have a special responsibility to call upon the U.S. government to:

— Stop the war with Russia

— Stop sending weapons to Ukraine and the European Union

— Resolve the current conflict within the United Nations Security Council

— De-escalate the threat of a nuclear war

Once again, our world is facing an imminent threat of war between two major nuclear powers. As in the past, the United States is using the North Atlantic Treaty Organization (NATO) as the vehicle to wage war in clear violation of international law and the Charter of United Nations.

The Biden administration is currently flying $200 million worth of weapons and other “lethal aid” to Ukraine and has 8,500 US troops on standby to enter that country. ‘Nonessential’ US diplomatic personnel and their families are being withdrawn from the country. The corporate media is lockstep in its portrayal of Russia as the enemy who is about to invade Ukraine. These actions constitute a de facto declaration of war, while the corporate media fan the flame of war.

This current escalation of aggression against Russia through expansion of NATO’s presence into Ukraine is a serious threat to world peace and requires a unified and rapid response by anti-war organizations to stop a major war.

To that end, we, the undersigned groups, have agreed to support a day of national action with the above mentioned demands on the United States government.

During the week of January 30 to February 5, we will hold visibility actions by holding signs and banners in well-trafficked areas such as major intersections or highway overpasses that raise awareness of this urgent crisis and urge the President to stop the war with Russia. 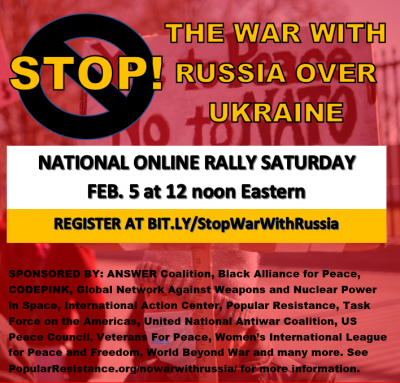 On the afternoon of February 5, we will gather online for a national rally to demonstrate the breadth of opposition to war. During the rally, photos of the visibility actions will be shared.

Feb. 1, San Francisco – Tuesday from 11:30 am to 1 pm, Leafleting and Bannering, “NO WAR with RUSSIA”. Ferry Bldg., San Francisco, at the foot of Market Street, near Embarcadero BART.Feb. 1 San Francisco – Tuesday from 2 to 3 pm, Press Conference at PELOSI’S HOUSE* 2640 Broadway, S.F., 1 block east/downhill from Divisadero.   * Group rides will be arranged for those who need them from the SF Ferry Bldg. to the press conference at Pelosi’s.

Sacramento, CA – No War With Russia Over Ukraine Friday at 4 to 5:30 pm! We’ll be Downtown at 16th and J Sts., Sacramento. We’ll be socially distanced, out-of-doors. Please wear a mask! Facebook page.

Atlanta – Saturday at 12:3o PM at Freedom Parkway and Moreland.

Portland, ME – Saturday, Feb 5 at 3:00 pm. In response to a national call for protests on February 5 against a possible US-UK-NATO war with Russia we will be holding a vigil in the Midcoast. All are invited – please bring appropriate signs that are large enough to be read by cars at a busy intersection. Our spot will be the four corners of the big intersection in Topsham that connects Main St from Brunswick and Hwy 196 near the Topsham mall. Lee Toyota is on the corner. This protest is being supported by Maine Natural Guard, Peace Action Maine, PeaceWorks, WILPF Maine and Maine Veterans for Peace.

Minneapolis – NO War with Russia!  Funds for human needs, not another war! Anti-war protest: Saturday at 11:00 am Mayday Plaza, 301 Cedar Ave South West Bank, Minneapolis. Join a visible anti-war presence to say NO to another war. Neighborhood march will include a stop at the office of U.S. Senator Amy Kobuchar. For more info see: http://antiwarcommittee.org/event/no-war-with-russia-funds-for-human-needs-not-another-war/

Woodstock, NY – Saturday at 11:00 am at the Woodstock Town Green in opposition to war in Ukraine to make our voices, banners and signs heard and seen.

Portland – Saturday starting at 11:30 am and will join the action listed above after an hour. At the Hawthorn Fred Meyers, corner of Hawthorn and Ceasar Chavez blvd, Portland Oregon.

San Antonio – Saturday at 4:30pm at  New Braunfels Gate of Fort Sam Houston  to say No to NATO and US aggression towards Russia! Endorsed by the Party for Socialism and Liberation, ANSWER Coalition, About Face Veterans Against the War South Texas, National Nurses United, Workers World Party, FIRE (Fight for Migrants Everywhere), and Veterans for Peace (San Antonio).

WDC – Saturday at 2:00 pm in Lafayette Square. Abolish NATO. No war with Russia.

Feb. 6 Webinar – Sunday at 12 noon Eastern (US/Canada): US/NATO Aggression at the Russian Border – A conversation between US, Russian and Ukrainian Peace activists. Click here to register

Feb. 6 Salem, OR – Sunday at 5:00 pm. Join Salem Against War and our coalition partners outside the Oregon State Capitol to say “Stop the War with Russia over Ukraine!” 900 Court St NE, Salem, OR 97301. Facebook Page.

Feb. 8, Online – Tuesday at 2:00 pm Eastern. Ukraine – the next NATO war? – No to War No to NATO Network. Click here for more information.

Feb. 8, Hartford, CT – Tuesday at 12:00 noon. Our Peace and Solidarity coalition will hold a demonstration at Senator Blumenthal’s office in downtown Hartford, near the old state house, in protest of the US/NATO war threats against Russia.

Feb. 10, Albuquerque, NM – Thursday at 1:00 pm. No War with Russia Rally in Albuquerque at Fourth and Lomas, sponsored by Veterans For Peace, Chapter 63, Answer, and others.