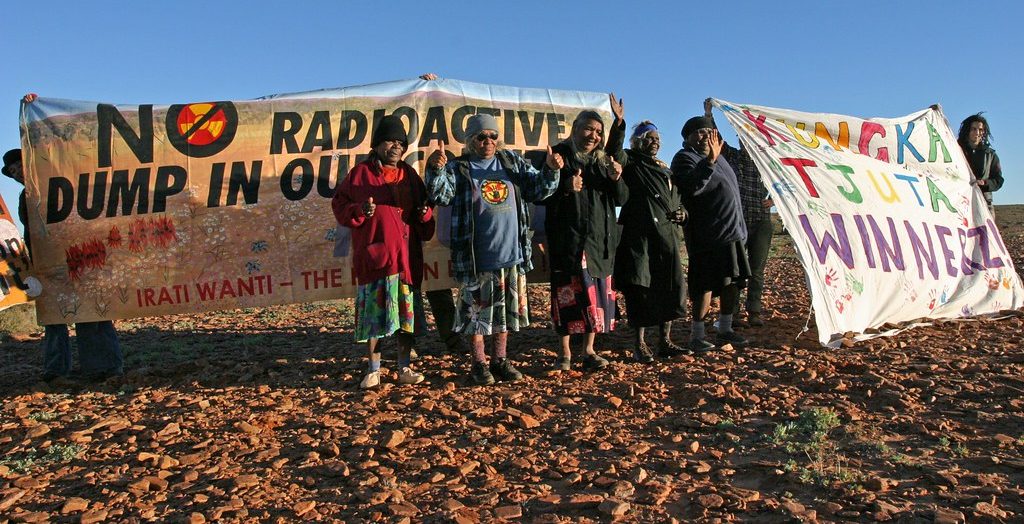 Above photo: There are inherent injustices associated with the dumping of nuclear waste, targeting high proportions of Indigenous populations.  “Aboriginal Traditional Owners protest against nuclear waste, Australia” by Friends of the Earth International is licensed under CC BY-NC-ND 2.0.

NOTE: The Ecosocialist Green New Deal, as championed by Howie Hawkins, the Green Party US presidential candidate, does not include nuclear power. Hawkins was a co-founder of the Clamshell Alliance that protested nuclear power in the 1970s. He was the first candidate to campaign on the Green New Deal in the United States in 2010.

The arguments against it.

Over the last few years, there has been a growing interest in a Green New Deal and there are many versions proposed in different countries. At the same time, there has also been criticism of these proposals on many counts, including the fact that they typically don’t include nuclear energy.

This criticism misses a basic point: a Green New Deal is, by its very definition, much more than an emissions reduction plan. As we argue below, the other attributes that characterize Green New Deals, rule out nuclear energy as an option.

Like the original New Deal of U.S. president Franklin D. Roosevelt in the 1930s, all Green New Deal proposals emphasize the creation of new jobs. Canada’s New Democratic Party version, for example, calls for “a New Deal for Climate Action and Good Jobs.”

Nuclear power is not a good job creator. One widely cited study found that for each gigawatt-hour of electricity generated, solar energy leads to six times as many jobs as nuclear power. This is compounded by the fact that solar power plants are far cheaper to build and maintain than nuclear reactors.

Green New Deal proposals also demand rapid emissions reduction; one spokesperson for the Pact for a Green New Deal talked of “a 50 per cent reduction in greenhouse gas emissions by 2030.” It takes, on average, a decade to build a nuclear plant and another 10 years before that to do the necessary planning, license procurement, and, most importantly, obtain the billions of dollars needed to finance construction. Therefore, it is impossible to scale up nuclear power fast enough to reduce emissions at the rate required to meet tight climate targets.

Last but not least, Green New Deal proposals emphasize ethics and equity. The Pact for a Green New Deal, for example, wants to ensure that the necessary energy transition “is socially just and doesn’t hurt those at the bottom of the economic ladder; and that it respects Indigenous rights.” It is precisely those groups that have been hurt most by the nuclear fuel chain.

Around the world, the uranium that fuels nuclear plants has predominantly been mined from traditional lands of Indigenous peoples, whether we are talking about Canada, India, the United States, or Australia. There is ample evidence of devastating health consequences from the production of uranium, for example, on the Navajo and the Lakota nations.

The nuclear industry’s plans for the disposal of radioactive waste streams produced by nuclear reactors also disproportionately target areas with high proportions of Indigenous populations, and has rightly been termed nuclear colonialism.

Nuclear waste, by its nature, raises difficult challenges for any effort to base energy policy on justice. The hazardous components of these wastes stay radioactive for hundreds of thousands of years, and no method can ensure safety for that long a period of time. There is inherent injustice in forcing future generations to deal with these radioactive products spreading into underground sources of water, when they do not benefit from nuclear electricity in any way.

One set of technologies that is widely seen as being necessary to confront climate change are renewables, especially solar and wind power. Because they are dependent on the sun shining and the wind blowing, some suggest that nuclear energy has to be part of the mix in order to ensure that electricity is available when needed.

This is not true and research has shown that it is possible for even Ontario, the Canadian province most dependent on nuclear energy, to phase out nuclear power and reduce emissions, while meeting electricity needs reliably.

Further, existing nuclear facilities, do not have the necessary flexibility to integrate well with the rapidly variable outputs from wind and solar power. Therefore, they inhibit ambitious climate agendas — a realization that informed the decision in California to close the Diablo Canyon nuclear plant.

In short, nuclear power is not compatible with the fundamental tenets of a Green New Deal.

M.V. Ramana is professor, Simons Chair in Disarmament, Global and Human Security, and director of the Liu Institute for Global Issues at the School of Public Policy and Global Affairs, the University of British Columbia.

Schyler Edmundson is a recent graduate from the Master of Public Policy and Global Affairs program at the University of British Columbia.

This article first appeared in The Star (Toronto) as part of a pro-con debate on nuclear power’s inclusion in a Green New Deal.