Above Photo:  Participants in the Treaty on the Prohibition of Nuclear Weapons ceremony at the UN, New York, September 26, 2019. Credit: ICAN | Darren Ornitz

At the United Nations last month, the prime minister of Pakistan, Imran Khan, alerted world leaders to a growing risk of nuclear war in Kashmir. “We are heading for a potential disaster of proportions that no one here realises,” he said. Tensions in the disputed region escalated this February to the point that conflict between India and Pakistan seemed distinctly possible.

Other nuclear-armed nations also have descended to new lows this year, making casual threats to unleash the destructive force of their nuclear arsenals against each other and even against nations without nuclear weapons. Many experts, including from the Bulletin of Atomic Scientists, as well as from UNIDIR (the UN Institute for Disarmament Research), have concluded that the world is closer to nuclear catastrophe today than at any point at least since the end of the Cold War.

Against this backdrop, nations are steadily joining the 2017 Treaty on the Prohibition of Nuclear Weapons (TPNW), a landmark United Nations agreement that outlaws nuclear weapons comprehensively and establishes a framework for achieving their total elimination. Just over two years after it opened for signature, the TPNW has more states parties than did the Biological Weapons Convention, the Chemical Weapons Convention, or the Comprehensive Nuclear-Test-Ban Treaty at this same point.

At a high-level ceremony in New York on September 26, five states deposited instruments of ratification for the TPNW—Bangladesh, Kiribati, Laos, the Maldives, and Trinidad and Tobago—and nine states signed it—Botswana, Dominica, Grenada, Lesotho, the Maldives, Saint Kitts and Nevis, Tanzania, Trinidad and Tobago, and Zambia. These additions bring the total number of ratifying states to 32 and the total number of signatories to 79.

Momentum began building in advance of the September 26 ceremony. On August 6 (Hiroshima Day), Bolivia, newly elected to chair the United Nations General Assembly First Committee (which deals with issues of disarmament and international security), brought the treaty halfway toward entry into force by depositing the 25th ratification. A few weeks later, Kazakhstan, where more than 450 Soviet nuclear tests were carried out from 1949 to 1989, with devastating health and environmental impacts, became the 26th state to ratify. And then, only one day before the ceremony, Ecuador became the 10th Latin American nation, and the 27th nation overall, to ratify the treaty.

With the results of the September 26 ceremony, the TPNW is now nearly two-thirds of the way towards achieving the 50 ratifications or accessions needed to become binding international law. Several other states are well advanced in their domestic ratification processes, with the treaty under consideration by the legislatures of Guatemala, Honduras, Ireland, and Nepal, among others. 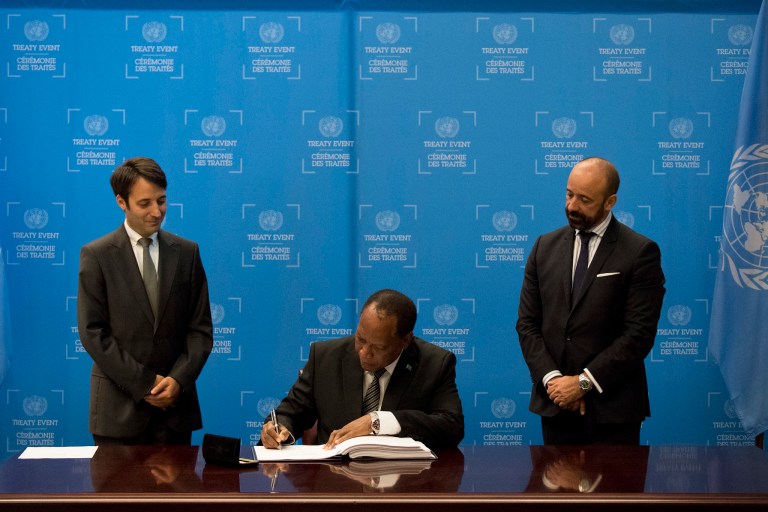 Latin America and the Pacific have been the fastest regions to adhere to the TPNW, while Europe and the Middle East have been the slowest. Significant progress is underway in Africa, and four of the September 26 signatures came from that region. African states overall have been slower to ratify the treaty, however, and so far, only the Gambia and South Africa have done so. September 26 also marked noteworthy progress in the Caribbean, which produced four signatures and one ratification at the ceremony.

Over the past year, the governments of South Africa, Thailand, New Zealand, and Guyana have hosted regional workshops to promote universalization of the TPNW. Representatives of the United Nations, the International Committee of the Red Cross, and the International Campaign to Abolish Nuclear Weapons participated. Further workshops are planned.

Despite the fact that certain nations are under pressure from powerful nuclear-armed states and their allies not to join the new treaty, the momentum toward entry into force appears unstoppable. Concerned about the increased risk of nuclear weapons use, and the catastrophic humanitarian consequences that would result, states from all regions are demanding action to safeguard humanity.