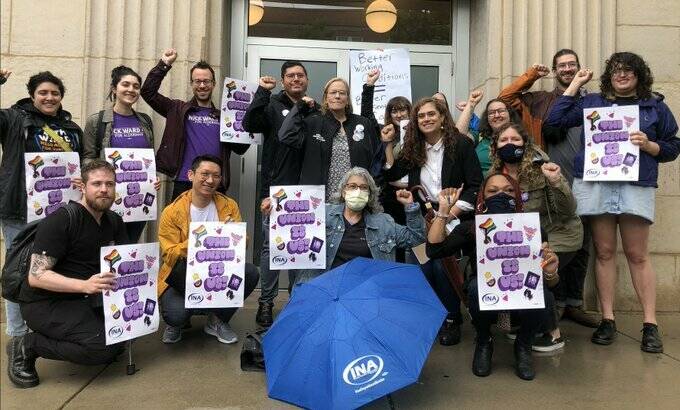 Nurses At LGBTQ-Affirming Healthcare Provider Are Planning To Strike

Workers at Howard Brown Health in Chicago are set to walk out next week after months of stalled negotiations.

Unionized nurses at Howard Brown Health, a Chicago network of LGBTQ-affirming healthcare clinics, are set to go on strike Monday, Oct. 3 after what workers say are months of stalled contract bargaining negotiations.

The union is comprised of 30 nurses across 10 clinics, who are bargaining for their second contract, the first of which expired in August. The nurses’ union, the Illinois Nurses Association, says that since June they have been negotiating with management on a weekly basis and have reached tentative agreements on more than 30 items, including staffing levels and a commitment to vaccinate workers against monkeypox. But, the union alleges, these conversations — now daily — have failed to progress to securing workers’ chief demands: Increased pay competitive with other nurses in the city, and retention bonuses.

These negotiations come on the heels of the recent union election of almost 500 non-nurse staff across Howard Brown, who sought to organize after years of low wages, chronic understaffing, burnout and a ​“toxic culture” in the workplace, according to workers. In doing so, they formed the largest healthcare unit in Chicago in more than a decade.

Howard Brown clinics serve more than 30,000 patients annually, offering primary, pediatric and dental care, counseling and HIV case management, STI testing and sexual education. The organization was on the front lines of the pandemic — administering more than 70,000 vaccinations — and over the summer was inundated with distributing the monkeypox vaccine. Howard Brown is a federally qualified health center and spends about $1 million annually on providing free healthcare. More than 20% of its patients are uninsured.

Issues of chronic understaffing, unsafe workloads, burnout and high turnover have long plagued the healthcare industry and were exacerbated by the pandemic, though this year, healthcare work stoppages are on the rise. In mid-September, about 15,000 unionized nurses in Minnesota held a three day strike, and in August, more than 2,000 Kaiser Permanente mental healthcare workers in California walked out — that strike is ongoing.

In These Times spoke with Tony Valentin, a nurse of more than 10 years and a Howard Brown nurse since 2019, about the current state of negotiations and workers’ demands.

What’s it like to be a nurse at Howard Brown right now?

It’s rewarding and also discouraging. Rewarding because of my amazing coworkers, my lovely patients who I adore, and our staff that we work with, the frontline workers who just make the place colorful and fun.

Our nurses are passionate about the community we serve and the type of work that we do. But it’s frustrating seeing all these decisions come from the top, like unfair pay allocations. We all know the CEO (David Ernesto Munar) got a $100,000 raise during Covid-19 and we barely got anything.

Nursing at Howard Brown has a large focus on sexual health — which is very specialized in this community that’s already stigmatized and underserved. A lot of our patients that we serve have sexually transmitted infections that need to be treated, and they need to be educated on it. We also do some primary care nursing as well, which includes general medicine, diagnostics and medical reconciliation.

How does this compare to other nursing?

I’ve been a nurse for 10 years myself. I’ve worked in neonatal intensive care units, I’ve been a flight nurse, a nurse in a helicopter, I’ve been a nurse in a rescue unit — but this is very different. This is something that serves our community, where they can come in and get care, and know that they’re not going to be judged and they’re going to be accepted for who they are. We’ve had people that come in that weren’t treated or were just given results that they have an STI. They were undertreated or not treated adequately, and they come to us for actual treatments and education.

One of my favorite parts of the job is doing hormone replacement injection training. Patients come in because they want to start hormones and decided they want to inject them, and we teach them how to do it safely. These are life-saving hormones for some folks.

So I’d say the importance of Howard Brown is just having a safe space and competent treatment team that can assist patients in a myriad of ways. It’s not just an injection or treatment, it’s the education behind it and the patient-centered care.

Howard Brown has been reported as being on the frontlines of the Covid-19 pandemic. How has that changed your work?

During Covid-19 nurses jumped right in. We had a Covid-19 hotline that was fielding all kinds of Covid related calls from people who were newly diagnosed to just having questions about it. We took on a lot of those extra assigningments, the Covid-19 hotline is just one of those, which was many, many hours of work on top of the duties that we already had.

It’s the same thing that we’ve been doing with monkeypox now — a lot of triage.

And since the summer, Howard Brown has also been on the frontlines of the monkeypox outbreak?

We had a spike in monkeypox that led to a couple of weeks where the majority of the patients in the sexual walk-in clinic were there for monkeypox. There were also a lot of monkeypox rule-outs, for instance, if someone has syphilis or herpes, because those lesions can mimic one another. So that requires testing and PPE, as well as just setting aside rooms for those patients, which increases the workload.

Luckily we didn’t have to do a lot of them, compared to Covid-19 numbers, but Tpox is the antiviral that was used for severe cases, and the nursing team was the one that worked to triage these patients — calling these patients, getting their consent, getting them a visit with the provider. And when they would come into the clinic, the nursing team would provide them with the medication.

With this extra work between Covid-19 and monkeypox, was there any change to pay or staffing?

Nope. Nothing. Zero. And something that disappointed me personally, when we started getting those increased monkeypox rule-out visits, they made the provider visits 20-minutes. That’s not enough time to do everything you need to do: Intake, PPE, testing, and education. Initially (these visits) were 40 minutes (though this only lasted briefly), but then they went to 20 minutes.

Three of my friends who were providers, physicians assistants or nurse practicioners at our sexual walk-in clinic all quit. And not one of those three quit because they wanted to — they quit because they felt they had no choice but to leave Howard Brown. And that’s sad to see.

So nurses unionized in 2019 and got a contract that year as well. What changes were made?

Wages was the big one, and that’s what had them at the table the longest. Better staffing ratios, establishing a disciplinary progression before any termination takes place, establishing a grievance process.

One thing that they were able to give to the whole organization, even though it wasn’t organized, was a PTO donation bank. That was something the union was able to get for the entirety of Howard Brown workers.

We’re getting closer, but we’re still far apart on the wages we want and the retention bonuses. Instead of a retention bonus they want to make it an incentive bonus. Management is proposing that our bonuses be tied into patient satisfaction scores — that’s unacceptable to the union. Patient complaints, usually, are not because of the staff; it’s because they can’t access care, or because of the poor decision making at the top.

We want appreciation. We want the retention bonuses that appreciate the work that we’ve done and will continue to do. And the very first thing that we presented to management on day one of bargaining was a memorandum of understanding with a retention bonus, and they set it aside and didn’t address it until August 28. They totally took it off the table and refused to bring it up.

We’d been bargaining weekly, but towards the end — this whole week, Monday through Sunday we were supposed to be bargaining, but we’ve had plenty of days where we’ve only been at the table (with management) for 30 minutes, after waiting 8 hours every day. We’ve had plenty of sessions where they just give us a proposal and then leave.

A lot of us are using our vacation time right now (for bagaining). I think they’re stalling and they know that the wall-to-wall union has just formed, and that all eyes are on our negotiations. I think they’re just trying to be careful with what they give out, but that’s not a reason to not negotiate in good faith for what we’re asking.

And what about wages?

With wages, we want to bump up starting nurses’ pay across the board. What we’re asking for is not a high ask, it’s around the average salary for any Chicago RN.

And that’s part of retention, too. We want people to come and feel like they can stay. There’s always been high turnover. The most senior nurse at Howard Brown is seven years, and the next most senior is five years. For a system that’s been in place since the 1970s, that’s not good.

I myself left for six months in 2021, and came back at a pay cut because I am invested in the services we provide. I missed working at Howard Brown, I missed my patients and my coworkers. Having a queer workspace, I find it wonderful, to be honest. We have people very invested in our community, not only in patient care, but in supporting and fighting for human rights.

That’s the thing: a lot of us can go elsewhere and get better wages at hospitals, but we chose to stay here. Asking for compensation that will retain us here is not a high ask. I would like to end my career here.

We stay because we love the work we do, and feel invested in our community. And I think that Howard Brown sees that. But that’s not a reason to not meet us with competitive wages that will keep us there. It almost feels like they’re okay with that turnover.

What can you tell me about the strike?

All unionized nursing members will not be working. It’s not something that we’re looking forward to, none of us want to strike, but we’re ready. We believe that the benefits from the strike will be advantageous to better patient care when we do come back. If you have better nurses, who want to stay where they’re at and don’t feel that it’s a stepping stone, then you have someone who’s experienced in the clinic to provide better patient care.

I don’t think management realizes how much work nurses do on a daily basis at Howard Brown, but if they continue this way, they’re going to find out.