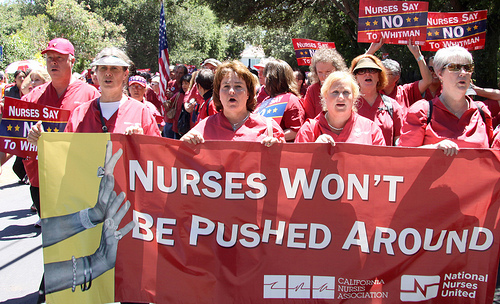 SACRAMENTO Calif. (Reuters) – A California-based nurses union said Thursday it was organizing strikes and other protests against what it views as insufficient protection for nurses caring for patients stricken with the deadly Ebola virus.

The nurses have demanded better protection when treating Ebola patients for weeks, ever since two nurses in Texas became infected with the virus while treating Thomas Duncan, a Liberian who fell ill and died while visiting Dallas.

“Nurses, who have been willing to stand by the patients whether it’s the flu, whether it’s Ebola, whether it’s cancer, now they’re being asked to put themselves in harm’s way unprotected, unguarded,” said Rose Ann DeMoro, executive director of National Nurses United, based in Oakland.

National Nurses United and its affiliate, the California Nurses Association (CNA), said nurses would walk off the job on Nov. 12, at 66 Kaiser Permanente facilities in California, and at Providence Hospital in Washington, D.C.

In addition to the walkouts, nurses at other facilities nationwide would engage in protests on Nov. 12, including picketing and staging bake sales to raise money for hazmat suits for nurses, DeMoro said.

The bulk of those walking out, about 18,000 nurses, are employees of Kaiser Permanente in Northern and Central California, where they are in the midst of acrimonious negotiations over a new labor contract.

“The claims CNA is making about Kaiser Permanente’s Ebola preparedness, in an attempt to justify a strike, are simply untrue,” she said.

Earlier this month, the U.S. Centers for Disease Control and Prevention beefed up its recommendations for personal protective equipment to include hooded full-body suits that cover the neck, more frequent hand washing and a supervisor who oversees the removal of infected gear, steps experts said should have been taken long ago.

But advocates for nurses say the recommendations should go further, and should be standardized and mandatory in all healthcare settings. The nurses union has circulated a petition asking Congress or President Barack Obama to declare a national standard.

“We want something where a virus cannot penetrate anywhere from head to toe in the nurse’s body,” DeMoro said.