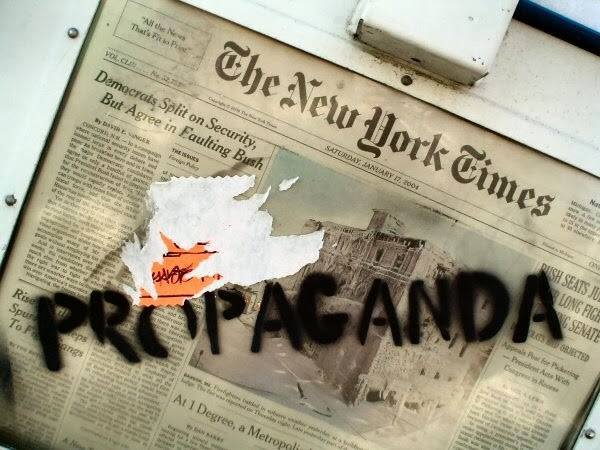 NY Times An Organ Of US Security State

In crises ranging from the Iraq War to civil conflicts in Syria and Ukraine, the New York Times has steadily transformed itself into a propaganda organ, promoting false U.S. government narratives rather than providing objective information to its readers, as Robert Parry observes again.

A principal way that the New York Times and other leading U.S. news outlets engage in propaganda is by selecting which facts to include in a story and which ones to exclude, a process exemplified by a Times article on an interview in which the head of NATO excoriates Russia over Ukraine.

NATO Secretary General Anders Fogh Rasmussen accused Russia of playing a “double game,” warned the West not to be fooled by the peaceful overtures of Russian President Vladimir Putin, and declared, “There’s no doubt that Russia is heavily engaged in destabilizing eastern Ukraine, and they continue their activities.” However, since Rasmussen provided no evidence, his credibility would seem to be central to this story. And, on Wednesday, correspondents Mark Landler and Michael R. Gordon provided some background about Rasmussen, noting that he served as prime minister of Denmark before getting the NATO gig in 2009.

But what is excluded from the Times’ story is what the readers would need to evaluate Rasmussen’s honesty as well as his own ability to weigh evidence. Not mentioned by Landler and Gordon was the fact that this is the same Anders Fogh Rasmussen who swallowed President George W. Bush’s bogus case for invading Iraq hook, line and sinker.

Before the U.S. invasion in 2003, Rasmussen famously declared that “Iraq has WMDs. It is not something we think; it is something we know. Iraq has itself admitted that it has had mustard gas, nerve gas, anthrax, but Saddam won’t disclose. He won’t tell us where and how these weapons have been destroyed. We know this from the UN inspectors, so there is no doubt in my mind.”

Of course, pretty much everything that Rasmussen declared was wrong, but it succeeded in tricking the Danish parliament into voting to join Bush’s “coalition of the willing” to invade Iraq. Yet, while Rasmussen was rewarded for his cooperation and his duplicity with the NATO job, a Danish intelligence analyst Frank S. Grevil was imprisoned for four months for disclosing documents that exposed Rasmussen’s deception.

While such an arrangement might now seem normal for Americans who have gotten use to prosecutions of truth-tellers who expose war crimes and immunity for liars who start unnecessary wars, Rasmussen’s falsehoods on Iraq – and his role in that criminal invasion – are facts that should have been provided to Times’ readers as they judge whether to believe his current allegations about Russia and Ukraine.

But Landler and Gordon saw fit to protect the Fogh machine by leaving out his unpleasant history, all the better to sell the preferred narrative blaming the entire Ukraine crisis on Russia and Putin. [For more on the New York Times’ journalistic malfeasance, see Consortiumnews.com’s “Will Ukraine Be NYT’s Waterloo?”]

Michael Gordon’s bias in favor of U.S./NATO propaganda also has a long history. He co-wrote, with Judith Miller, the infamous aluminum tube story of Sept. 8, 2002, relying on U.S. intelligence sources and Iraqi defectors to frighten Americans with images of “mushroom clouds” if they didn’t support Bush’s invasion of Iraq. The timing played perfectly into the administration’s advertising “rollout” for the Iraq War.

The story turned out to be false and to have unfairly downplayed skeptics of the nuclear-centrifuge scenario. The aluminum tubes actually were meant for artillery. But the article provided a great impetus toward the Iraq War, which ended up killing nearly 4,500 U.S. soldiers and hundreds of thousands of Iraqis.

Gordon’s co-author, Judith Miller, became the only U.S. journalist known to have lost a job over the reckless and shoddy reporting that contributed to the Iraq disaster. For his part, Gordon continued serving as a respected Pentagon correspondent.

Gordon’s name also showed up in a supporting role on the Times’ botched “vector analysis” story of Sept. 17, 2013, which nearly helped get the United States into another Mideast war, with Syria. That story traced the flight paths of two rockets, recovered in suburbs of Damascus after the Aug. 21 sarin gas attack, back to a Syrian military base 9.5 kilometers away.

The article became the “slam-dunk” evidence that the Syrian government was lying when it denied launching the sarin attack that killed several hundred people. However, like the aluminum tube story, the Times’ ”vector analysis” ignored contrary evidence, such as the unreliability of one azimuth from a rocket that landed in Moadamiya because it had struck a building in its descent. That rocket also was found to contain no sarin, so it’s inclusion in the vectoring of two sarin-laden rockets made no sense.

But the Times’ story ultimately fell apart when rocket scientists analyzed the one sarin-laden rocket that had landed in the Zamalka area and determined that it had a maximum range of about two kilometers, meaning that it could not have originated from the Syrian military base 9.5 kilometers away. C.J. Chivers, one of the co-authors of the article, waited until Dec. 28, 2013, to publish a halfhearted semi-retraction. [See Consortiumnews.com’s “NYT Backs Off Its Syria-Sarin Analysis.”]

Last April, Gordon was involved in another journalistic fiasco when he and two other correspondents fell for some grainy photographs peddled by the U.S. State Department to supposedly prove that Russian military personnel — who had been “clearly” photographed in Russia — turned up fighting in Ukraine.

However, two days later, the Times was forced to retract the story when it was discovered that a key photo that was supposedly taken in Russia was actually snapped in Ukraine, destroying the premise of the article. [See Consortiumnews.com’s “NYT Retracts Russian Photo Scoop.”]

Landler, the Times’ White House correspondent, has been another propaganda specialist when it comes to framing foreign confrontations in ways favorable to the U.S. government and its allies. For instance, on March 5, 2012, he appeared on MSNBC and offered this account of Israeli-Iranian tensions:

“The Israelis feel the window for that [denying Iran the capability to build nuclear weapons] is closing and it’s closing really fast, and if they allow it to close without taking military action, they would find themselves in a position where the Iranians suddenly are in possession of nuclear weapons, which they’ve threatened already to use against Israel. As the Israelis always say, that’s an existential threat to Israel, which is something we don’t necessarily feel here in the United States.”

Landler’s account was hair-raising, claiming that Iranians have “threatened already to use [nuclear weapons] against Israel” which the Israelis understandably would perceive as an “existential threat.” But Landler’s statement simply wasn’t true. Iranian leaders continue to deny that they even want nuclear weapons, so it makes no sense that they would threaten to use them against Israel.

For instance, in February 2012, Iran’s Supreme Leader Ali Khamenei, who controls the armed forces, called “the possession of nuclear weapons a grave sin” and said “the proliferation of such weapons is senseless, destructive and dangerous.” He insisted that “the Iranian nation has never pursued and will never pursue nuclear weapons.”

Further, the U.S. intelligence community reported in 2007 that Iran stopped research work on a nuclear weapon in 2003 and has not resumed that effort. That assessment has been reaffirmed periodically and remains the position of the CIA and other intelligence agencies.

So, perhaps it’s no surprise that the Times would spare its readers the relevant background on NATO chief Anders Fogh Rasmussen’s credibility because otherwise the supposed “newspaper of record” might also be expected to explain why it continues to entrust sensitive stories to journalists who have a history of slanting information in ways that may advance their careers but misleads the public.

Investigative reporter Robert Parry broke many of the Iran-Contra stories for The Associated Press and Newsweek in the 1980s. You can buy his new book, America’s Stolen Narrative, either in print here or as an e-book (from Amazon andbarnesandnoble.com). For a limited time, you also can order Robert Parry’s trilogy on the Bush Family and its connections to various right-wing operatives for only $34. The trilogy includes America’s Stolen Narrative. For details on this offer, click here.