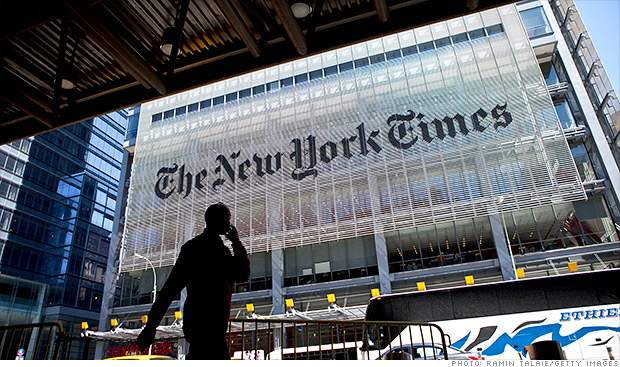 No Lessons Learned at the NYT

Exclusive: Mistakes were made on the Iraq War in 2003 and lessons have been learned, the New York Times says, but those lessons haven’t carried over to the Times’ deeply biased coverage of the crises in Syria and Ukraine, reports Robert Parry.

The New York Times’ public editor Margaret Sullivan acknowledges that the newspaper’s coverage of Iraq before President George W. Bush’s 2003 invasion “was flawed, driven by outside agendas and lacking in needed skepticism.” But she says lessons were learned.

“Many Op-Ed columns and Times editorials promoted the idea of a war that turned out to be both unfounded and disastrous,” Sullivan wrote on June 29, adding that, in retrospect, the coverage “was the cause of much soul-searching for The Times” and that those lessons now are at the forefront of the Times’ handling of the new crisis in Iraq. However, the real question isn’t whether the Times will make the same mistakes in flacking for an Iraq War sequel. As Sullivan noted, President Barack Obama – unlike his neocon predecessor – remains resistant to dispatching U.S. combat forces to Iraq.

The more pertinent question is whether the Times’ coverage of other crises, particularly in Syria and Ukraine, has suffered from the same lack of journalistic integrity that beset the Times’ handling of the run-up to the Iraq invasion. On that score, an objective observer would have to say that little has changed.

With very few exceptions, the Times has served as a cheerleader for the neocons on the crises in Syria and Ukraine as much as it did in 2002-03 on Iraq. The Times has made little effort to hide its sympathy for the hawks.

For instance, the Times has worked to build support for a U.S. bombing campaign against the government of Syria (as well as more U.S. weapons for the “moderate” rebels) and the newspaper has beaten the drums for a heightened confrontation with Russia over Ukraine.

Besides a preponderance of neocon and otherwise hawkish opinion pieces regarding those two crises – while publishing virtually nothing from a more dovish perspective – the Times’ “news” columns have read like propaganda sheets for the U.S. State Department. It’s as if the Times had joined one of the department’s “public diplomacy/information warfare” campaigns.

Just as the Times deceived readers with a bogus story in 2002 about Iraq buying “aluminum tubes” for nuclear centrifuges, the Times published a similarly false story in 2013 using a “vector analysis” to pin the blame for a sarin gas attack on the Syrian government. The story later collapsed.

This year, while whipping up anti-Russian hysteria over the Ukrainian civil war, the Times fell for State Department disinformation that peddled photos purporting to show Russian special forces “clearly” inside Russia and then in Ukraine (except it turned out that the inside-Russia photo was actually snapped in Ukraine, destroying the story’s premise).

On the Syrian civil war, the Times’ coverage – like that of virtually the entire U.S. mainstream media – has put white hats on the rebels and black hats on the government. The major complaint has been that Obama hasn’t given more weapons and more training to the “moderate” rebels so they could overthrow the government of Bashar al-Assad.

So, it may have come as a shock to many Times readers last September when the leading Syrian rebel groups renounced the “moderate” exiles who had been featured by the West as the face of the rebellion. Instead, the fighters inside Syria embraced an Islamic extremist organization affiliated with al-Qaeda and declared that their intent was to transform Syria into a Taliban-style state. [See Consortiumnews.com’s “Syrian Rebels Embrace al-Qaeda.”]

Despite the clear dominance by Sunni jihadists within the rebel movement, the steady drumbeat of MSM writing is still that Obama must step up aid to the “moderate” rebels, an incessant demand that Obama recently bended to with his proposal for a half-billion dollars in military support for these elusive “moderates.”

Pushing for a New Cold War

Regarding this year’s Ukraine crisis, you would similarly be hard-pressed to find any opinion articles challenging the State Department’s line on last February’s coup d’etat that ousted elected President Viktor Yanukovych.

The conventional wisdom — conveyed by the Times and other MSM outlets — has been to blame the crisis nearly entirely on Russian President Vladimir Putin, though he clearly was reacting to events instigated by the West, not provoking the crisis himself.

Again, the Times and the rest of the MSM glued white hats on the Kiev coup-makers and black hats on Yanukovych, Putin and the eastern Ukrainians who have resisted the coup. Arguably, there has been even less even-handedness regarding this year’s Ukraine crisis than there was in writing about Iraq in 2003.

Whether in the Times’ opinion sections or the “news” pages, the pivotal role of western Ukrainian neo-Nazi militias has been shoved down the memory hole. Whited out has been how these brown shirts spearheaded the Feb. 22 coup and killed ethnic Russians in Odessa and elsewhere. On the rare occasions when the neo-Nazis are mentioned, their existence is immediately dismissed as “Russian propaganda.” [See Consortiumnews.com’s “Ukraine, Through the US Looking Glass.”]

So, public editor Sullivan appears to be wrong when she suggests that a chastened New York Times won’t make the same Iraq War mistakes again. Indeed, the Times seems to have learned no lessons at all.

A key reason why the Times’ embarrassment over its gullible Iraq War coverage hasn’t led to any improvement in the Times’ handling of Syria and Ukraine is that there was very little accountability on those journalists who lined up behind Bush’s propaganda on Iraq.

Judith Miller, an extreme case in terms of her close ties to leading neocons, was the only known example of a Times journalist losing a job over what the public editor admits was the “flawed” and biased reporting on Iraq. Miller’s co-writer on the infamous “aluminum tube” story, Michael R. Gordon, is still around participating in some of the egregious stories on Syria and Ukraine. [See Consortiumnews.com’s “Another NYT-Michael Gordon Special?”]

The Case of Keller

Perhaps even more remarkable is that Bill Keller won a promotion to executive editor – arguably the most prestigious job in U.S. journalism – after it became clear that he had been completely wrong in his support of the Iraq invasion. Keller had penned a major article for the Times’ Sunday magazine, entitled “The I-Can’t-Believe-I’m-a-Hawk Club,” which cited a host of liberal luminaries who had clambered onto the Bush-war bandwagon.

Yet, in July 2003, four months after the Iraq invasion and its failure to find Iraq’s mythical WMD, Keller replaced Howell Raines, who had been cashiered for trusting reporter Jayson Blair who was caught making up sources in reporting on the Washington D.C. sniper case.

Though Blair’s bogus reporting didn’t cause any loss of life, Raines was still dismissed in disgrace. By contrast, Keller’s influential article – essentially drumming out of the Washington mainstream anyone who didn’t join the hawk club – eased the nation onto Bush’s path into an aggressive war which killed hundreds of thousands.

This out-of-whack notion of accountability – meting out severe punishments for relatively minor journalistic malfeasance while actually rewarding participants in major journalistic crimes – helps explain why the Times continues to promote U.S. interventions overseas through biased and misleading reporting. There is no real downside – and a potentially big upside – for playing the hawk.

According to public editor Sullivan, the Iraq War promoters at the Times did experience some anguish at the invasion’s disastrous consequences. “The editorial page editor, Andrew Rosenthal, told me recently, in another context, that The Times’s earlier misjudgments about Iraq were very much on the minds of the opinion staff,” she wrote.

But that handwringing has not convinced reporters and editors at the Times that they should demonstrate professional skepticism when it comes to the crises in Syria and Ukraine. Indeed, it appears that the Times is pushing for those interventions with even greater unanimity than was shown on the Iraq War.