Protest Against Exhibit For Being ‘Racism Disguised As Art’

Above Photo: Activists drop a banner reading “Racism disguised as art,” in front of the James Cohan Gallery in Chinatown. (WNV/Louis Chan)

On October 28, protesters from the Chinatown Art Brigade, Decolonize This Place, Bushwick’s Mi Casa No Es Su Casa, and the Boyle Heights Alliance Against Artwashing and Displacement hoisted a banner, which read “Racism disguised as art,” across the faded awning Fast had installed. Faced with protesters banging drums and chanting “Chinatown, not for sale,” the Israeli-American artist received quite the send off.

This symbolic intervention featured a conference with local Chinese language press and a bilingual speak-out about the pivotal role galleries and the art world play in gentrification. This was key, as residents and neighborhood advocates needed space to loudly decry the ongoing displacement and demand a municipal model that would protect the neighborhood. Activists say these issues are simultaneously connected to and bigger than the individual prejudices of Omer Fast and individuals like him.

In fact, the link between the art world and gentrifying developers deserves intense scrutiny. According to the Chinatown Art Brigade — a collective of activists, artists and media makers committed to defending tenants rights and fighting evictions — galleries are often involved in displacing the most vulnerable long-term residents in neighborhoods they enter. Viewed in that light, Fast and James Cohan’s conduct was simply a particularly bold iteration of entrenched structural racism that abets creeping gentrification.

The Chinatown Art Brigade has worked alongside the Coalition Against Anti-Asian Violence and the Chinatown Tenant Union. They helped launch the “Here to Stay”project, which used massive outdoor projections to illuminate art “based on oral histories, photography and video created in community-led workshops.” They have also confronted galleries for being implicated in the expulsion of 30 percent of the Chinese population and elimination of 50 percent of affordable housing throughout Chinatown and the Lower East Side.

This has catalyzed a drastic transformation of these neighborhoods. The galleries are a vanguard for pricey condos and megatowers that push out grocery stores and other services on which the community has relied. The gentrification of Chinatown is a brutal business. Ambitious landlords heap abuse on poorer tenants and reserve needed repairs for units intended for newer tenants with higher disposable incomes. At the same time, outlets like Paper and i-D ponder whether Chinatown is the “new Chelsea.” 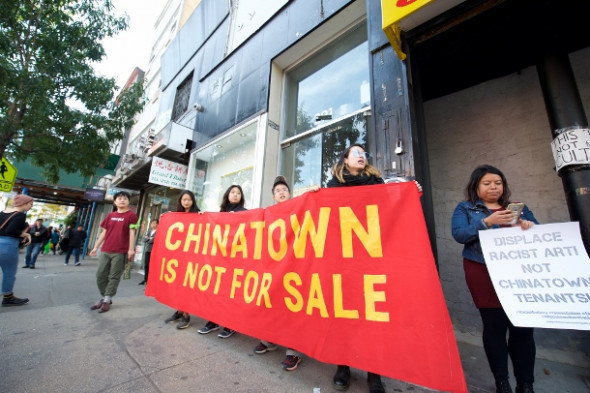 In reality, an incoming population that is whiter and more affluent is receiving benefits largely withheld from the existing community. This isn’t an entirely new phenomenon, though. This kind of discrimination has been integral to the historically racist treatment of Chinatown, which has taken many forms including unreliable trash collection and residential segregation. Today, these each factor into the exodus of Chinese and other residents of color from Lower Manhattan.

Moreover, gallery owners are directly involved in the real estate transformation that is making life in Chinatown prohibitively expensive. Marc Straus, for example, owns several properties near James Cohan that have been slated for demolition and replacement by a seven-story luxury building. On his website, it says his gallery at 299 Grand Street is located in what “began as a tenement and in the last century has housed various retail stores consistent with a changing population.”

James Fuentes, who fastidiously emphasizes his Lower East Side and South Bronx roots, is a creative-class nomad, like many in the gallery scene. Fuentes has relocated several times, beginning on Broome Street and then settling at 55 Delancey Street two years ago. Gallery owners, it turns out, aren’t immune to the rent cycle either. The difference is that they can pay more than Chinatown’s working class residents. When there’s a large gap between the disposable incomes of newer and established tenants, landlords see the opportunity to raise rents. Fuentes has noted this, saying that he “knew he was implicated from the minute” he signed a 10-year renewal on his latest space.

Fuentes waxes nostalgic about the Lower East Side — and by extension Chinatown — being a hub for the immigrant community. He is a fatalist about gentrification, though, convinced that the immigrant presence is bound to be supplanted and that galleries are the future of development. During an interview with the Art Dealers Association of America, he referenced Darwin when describing the “nature” of New York, explaining that “the species that survives is able to best adapt and adjust to the changing environment in which it finds itself.”

The Chinatown Art Brigade and its allies would dispute that sort of received wisdom. Presenting the transformation of Chinatown and the Lower East Side as an evolutionary process, where those who cannot adapt are naturally selected out, is in and of itself a historically racist position. It obscures how powerful entrepreneurs aggressively leverage their advantages, which were largely conferred by historic discrimination and segregation, over tenants. 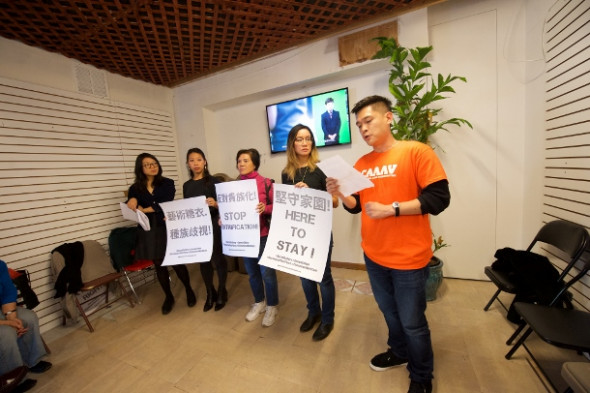 Individuals like Fuentes and Straus like to brand their ventures as small businesses. Fuentes has gone so far as to anoint his space a “Mom-and-Pop” fighting the good fight before the culture of Lower Manhattan gets erased. That framing, however, is relative. As Liz Moy, one of the brigade’s activists, pointed out, a bakery in Chinatown would have to do significantly more business than a gallery to make rent, since the latter need only sell a few pieces. Moreover, the capital concentrated in galleries won’t be reinvested in the neighborhood long term, at least not in ways that are immediately beneficial to the community. Straus’ work demonstrates how investment in galleries eventually leads to building high-end condos.

This is why the Chinatown Art Brigade has been putting these owners on notice and fighting for an alternative development model in the neighborhood. Before the latest protest, a small contingent of organizers live-streamed a gallery tour in which they presented each owner with a pledge to support Chinatown’s middle and lower-class residents’ right to public and residential space, as well as initiatives to curb the impact of gentrification.

Last year, Margaret Lee of the 47 Canal gallery responded positively to a similar pledge. Straus, on the other hand, refused to look at the current version. Regardless, the gallery owners should know by now that those who won’t respect Chinatown’s existence can expect continued resistance.