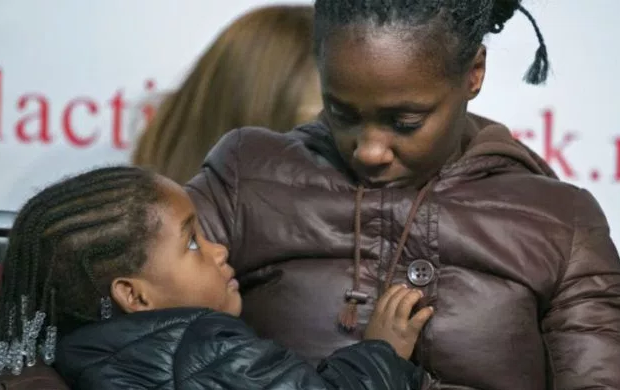 Above Photo: In order to settle the wrongful death lawsuit filed by Gurley’s family, Liang has agreed to pay $25,000 to Kimberly Ballinger, the mother of Gurley’s young daughter Akaila.

After an NYPD officer accidentally killed an innocent, unarmed man inside a dark housing project stairwell, the city and the New York City Housing Authority have recently agreed to pay Akai Gurley’s family more than $4.1 million to settle their wrongful death lawsuit. Although the officer was fired and initially convicted of manslaughter, a judge reduced the charge and sentenced him to community service instead of serving jail time.

On November 20, NYPD officers Peter Liang and Shaun Landau were conducting vertical patrols on the eighth floor of the Louis H. Pink housing project in Brooklyn. Although Deputy Inspector Miguel Iglesias had ordered them not to conduct vertical patrols inside the building, Liang reportedly opened the door accessing the stairwell with the same hand holding his Glock .9mm pistol. Instead of opening the door with his right hand which held his flashlight, Liang claims that he accidentally fired a shot that ricocheted off the wall and into Gurley’s chest.

“They didn’t identify themselves,” recalled Gurley’s girlfriend, Melissa Butler. “No nothing. They didn’t give no explanation. They just pulled a gun and shot him in the chest.”

Standing on the floor below the officers, Gurley staggered down to the fifth floor where he collapsed. Butler ran to an apartment to ask for help and called 911. As the operator instructed Butler to administer first aid until the paramedics arrived, Liang and Landau remained upstairs texting their union rep instead of calling in the shooting or offering assistance.

Convicted of manslaughter by a Brooklyn jury, Liang was subsequently fired from the department. After Supreme Court Justice Danny Chun reduced the charge to criminally negligent homicide, Liang was sentenced to 800 hours of community service instead of jail.

In order to settle the wrongful death lawsuit filed by Gurley’s family, Liang has agreed to pay $25,000 to Kimberly Ballinger, the mother of Gurley’s young daughter Akaila. The city will pay $4.1 million, while the New York City Housing Authority has agreed to pay $400,000 to his family.

Last year, the city agreed to pay $5.9 million to the family of Eric Garner after NYPD Officer Daniel Pantaleo was caught on video placing Garner in a banned chokehold while ignoring his pleas that he could not breathe. Although the city decided to settle the family’s wrongful death lawsuit, Pantaleo currently does not face criminal charges for causing Garner’s death and remains on the force.