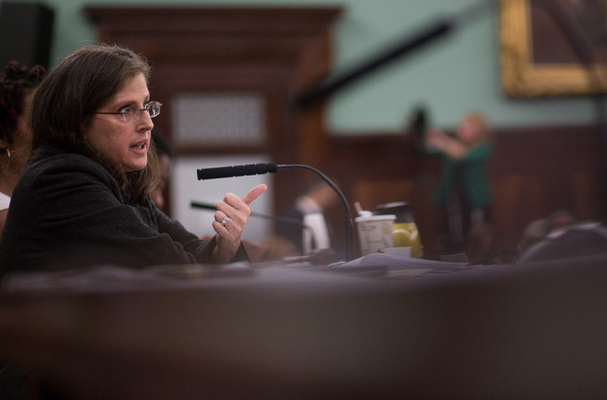 Note: In addition to the city council voting unanimously against fast track for the TPP and other corporate rigged agreements, New York Mayor Bill de Blasio also came out against fast track, calling the trade agreements “raw deals” for the US public.

Photo by William Alatriste for the New York City Council

Councilmember Helen Rosenthal warned in a video interview on Monday that if President Barack Obama signs the Trans-Pacific Partnership it could very well jeopardize recent city laws that protect working people and the environment.

Rosenthal led a rally on City Hall’s steps to protest the mammoth trade agreement being pursued by the United States and 11 other countries. She then held a hearing on a resolution she’s introduced to make New York City a “TPP-Free Zone.” She acknowledged it’s just a symbolic gesture, but important nonetheless to introduce because the TPP could potentially lead to job losses and the rollback of key legislation.

“To be sure, this is a symbolic gesture. We cannot tell President Obama what to do. This is New York City, and there is no question in my mind that our laws, our hard fought victories for protecting the lives of all New Yorkers will be at risk if he signs the TPP. And to the extent that we putting it on a fast track where there would be no input from Americans and no opportunities to amend what’s in there is absolutely deplorable,” said Rosenthal.

She contends that the recently enacted paid sick leave law, the smoking ban passed by the Council during Mayor Michael Bloomberg’s tenure and the city’s efforts and ambitions to reduce the city’s carbon emissions by 80 percent by 2050 are all at jeopardy because multinational corporations would have the opportunity to challenge the laws or sue if laws interfere with their profitability.

When asked if she believes there are any positive attributes of the TPP for the city, she answered unashamedly.

“No. New York City would be put in such jeopardy by signing the TPP. Our laws that protect our citizens would be put at risk. That’s not acceptable,” Rosenthal said.

Most of the activists who joined CM Rosenthal at the City Hall rally would probably also say there wouldn’t be one positive outcome from the TPP for the city. Of course, others disagree: The Office of the United States Trade Representative’s website boasts that the TPP will unlock opportunity for millions of Americans vis-à-vis exports to more markets in Asia, while enforcing fundamental labor rights, promoting strong environmental protections and helping small businesses.