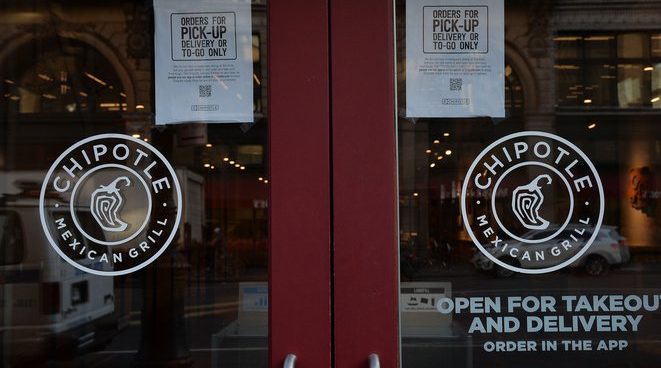 Above photo: A Chipotle location in NYC on March 21st, 2020. Kristin Callahan/Ace PIctures/Shutterstock.

NYC fast food workers would get increased protections under two bills that passed in the City Council on Thursday.

The two bills would increase protections for workers at large fast food companies, expanding upon worker protection laws passed in 2017.

One measure would prohibit fast food employers from firing workers without “just cause,” meaning showing the employee failed to meet job duties or has harmed the employer’s business interests.

Another would require that any layoffs occur by seniority, protecting workers who have been with a given company longer.

Arbitration guidelines are laid out in the bills as well.

“Fast food workers have subjected to unfair work environments and have been the victims of unfair reduction of hours or arbitrary termination, causing them to live in a constant state of uncertainty,” Queens Councilmember Adrienne Adams said during a Zoom rally on Thursday morning.

“These employees are getting up before dawn or working overnight, commuting long hours to work, doing physically demanding work, and missing meals with their own families,” said Adams, a lead sponsor of the package with Councilmember Brad Lander.

A downtown Manhattan Chipotle worker, Jeremy Espinal, said he enjoys his job at the burrito fast casual restaurant, but the working environment is “toxic.” He’s been relocated to four different locations over his three year tenure, once due to an unexpected hours reduction.

“[T]hey kind of keep us always on our toes and always make us feel like we’re disposable and that they can always fire us,” Espinal said during the virtual rally. “If ‘just cause’ had happened earlier, I would have countless friends that would still have their jobs.”

"Large publicly traded fast food companies including @McDonalds, @ChipotleTweets, & @dunkindonuts have made billions in profits during the pandemic, with share prices increasing by at least 30%." – Bill Sponsor, @bradlander pic.twitter.com/fYdINzbe21

Small business leaders have criticized the bills as “sucker punches” to the restaurant industry after the measures passed in a council committee earlier this week, according to the NY Post. Michael Brady, the head of Bronx’s Third Avenue Business Improvement District, has said that, “Collective bargaining by legislation is wrong and sets a precedent for all New York City businesses.”

But the measures would only apply to major national chains with 30 locations in the U.S., as defined in the Fair Work Week law passed in 2017.

Gothamist has reached out to the fast food companies Chipotle, McDonald’s, Wendy’s, Dunkin’ Donuts, and Dominoes requesting comment on the package.

“Working people have been hit hardest by the pandemic and they deserve protections and fair wages,” de Blasio said in a statement. “I’m proud to stand with fast food workers as our city creates a more equitable recovery.”

The new rules will go into effect about six months from now after passing with an overwhelming majority Thursday.

“These workers are most vulnerable to being fired without a cause related to their work performance,” City Council Speaker Corey Johnson said during a City Council meeting Thursday. “It has to stop. This practice prevents them from speaking out about harassment and poor working conditions.”

Organizing efforts to improve workers’ rights have intensified during the COVID-19 pandemic as workers in industries with little benefits and protections have been deemed essential during the health crisis. Amazon and Whole Foods workers have staged walk-outs and strikes at the peak of the pandemic. NYC has become even more reliant on delivery workers who have for years faced dangerous working conditions, difficulty accessing unemployment benefits, and police crackdowns on their e-bikes.