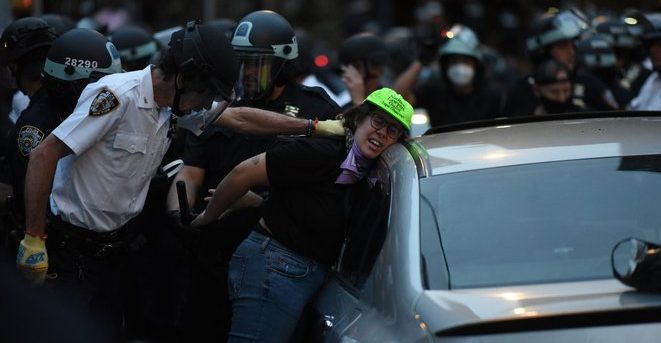 Above photo: A legal observer from the National Lawyers Guild is arrested in the Bronx on Thursday night. CS Muncy/ Gothamist.

“Round Up The Green Hats.”

On Thursday evening before curfew, Rex Santus was standing alone on a quiet Mott Haven street corner when he caught the attention of NYPD officers passing in an unmarked minivan. As eight officers surrounded him, the 28-year-old CUNY law student identified himself as a legal observer with the National Lawyers Guild, and explained his intention to monitor a nearby protest against racist police brutality.

The officers accused him of “illegal counter-surveillance against police,” Santus said. They seized his notebook, reading from it and mocking him for writing that some cops had obscured their badge numbers. As the officers feigned ignorance about the role of legal observers, Santus recalled, an apparent warning blared from their police radios: “A lot of LOs out tonight.”

But none of that seemed to matter when the NYPD carried out its violent mass arrest of peaceful marchers in Mott Haven on Thursday. Just before 8 p.m., hundreds of protesters — as well as journalists and legal observers — were suddenly trapped on a narrow street by officers, who charged them from either direction while wielding batons and bikes. On top of the 260 people arrested, at least 11 legal observers with the National Lawyers Guild were detained, in some cases violently.

While legal observers have been arrested in the past, leaders of the NLG said Thursday’s incident represented an unprecedented show of force, seemingly authorized by top NYPD officials, against the volunteer bystanders. The operation was supervised by Chief of Department Terence Monahan, the NYPD’s highest ranking uniformed officer.

In a letter sent to NYPD Commissioner Dermot Shea on Sunday, the local chapter of the NLG alleged that officers engaged in “targeted harassment” of legal observers, with the goal of intimidating them and interfering in their efforts to hold police accountable. By detaining them and seizing their notes and identification, the NYPD violated legal observers’ 1st and 4th Amendment rights, the attorneys association alleged.

A police department spokesperson did not respond to numerous questions about the arrests, but provided the following statement: “The NYPD’s mission is to ensure public safety and uphold the law and any claims of targeting are baseless. Police officers were enforcing a curfew, non-essential workers were not permitted to be out after 8pm.”

Members of the de Blasio administration have confirmed to attorneys and elected officials on numerous occasions that legal observers are exempt from the curfew, according to emails shared with Gothamist. When one legal observer attempted to show an NYPD officer documentation of that exemption, the officer allegedly snatched the paper, crumpled it, and threw her to the ground.

“It felt as if we had been taken to prevent us from witnessing what was happening on the ground,” said Krystin Hernandez, a 27-year-old legal observer and Bronx resident detained at the scene. A video shared with Gothamist shows officers jerking Hernandez’s arm behind her body then shoving her to the street. Several of the observers reported that the cuffs were so tight that their hands went numb after just a few minutes.

According to photos and accounts from numerous witnesses, the brutal arrests happened in full view of an NYPD Legal Bureau officer, who repeatedly told the cops, “Legal Observers can be arrested, you’re good to go.” Roughly 15 minutes after they were handcuffed, the letter states, another officer officer was heard calling for police to round up “all the green hats.” Cops then moved the legal observers to the other side of the street, placing them with their backs toward the detained protesters.

“They took them out of commission while those arrests were happening, and gathered them up and put their backs to everything they otherwise would’ve been observing,” said Moira Meltzer-Cohen, an attorney with NLG-NYC who helped write the letter to Shea.

She stressed that the actions toward legal observers should not overshadow NYPD’s violent crackdown on other demonstrators, particularly New Yorkers of color, but added: “The targeting of the people who are there to protect constitutional rights of protesters is of particular concern.”

Asked about the mass arrests last week, Shea said that the operation was “executed nearly flawlessly.” The preemptive crackdown was necessary, he argued, because the NYPD had learned that demonstrators intended to injure cops, burn things down, and “cause mayhem.” When Gothamist pointed out that the march had been entirely peaceful, Shea claimed that protesters had been caught “bringing a gun and gasoline and weapons to the scene.”

That gun was recovered from an alleged gang member three hours before the protest began and half a mile away, the Post reported on Monday. Officials have also since clarified that there was no gasoline recovered at the demonstration.

“I also believe that the information Commissioner Shea is putting forward is based on fact,” the mayor said Friday, when pressed about why cops had incited violence against peaceful protesters, legal observers, and journalists. He added, “If someone is there in a legal role, they need to be respected.”

Unlike many New Yorkers who have spent more than 24 hours in jail after being arrested for protesting, the legal observers were eventually released at the scene. They say officers informed them that they would receive some unspecified charge in the future, though the observers said they hadn’t heard anything about it as of Monday.

Asked whether the officers involved in violently detaining legal observers against de Blasio’s own orders should face discipline, a spokesperson for the Mayor’s Office said the administration was “looking into what happened.”

You can read the full letter from NLG-NYC below: